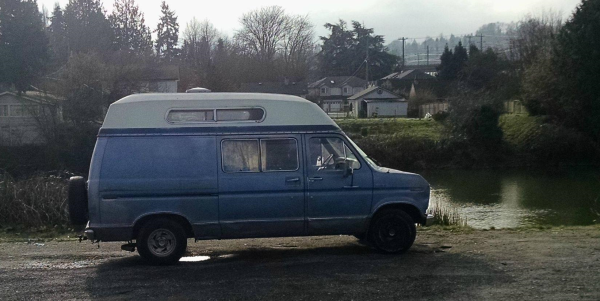 They threaten us when we are young: study hard, work hard, and get a good job or you’ll end up living in a van down by the river. You will fail where others succeed. And life for you will be bitterness as everyone laughs at you.

When I first became involved with conservatism, the most common question floating around was “Why don’t people wake up?” We could see how our society was degenerating through a death of a thousand cuts, and clearly there was no path but into oblivion. And yet people did nothing.

Most astonishing was how inert the smarter people were. The people you would think might be able to make vast change were instead completely resigned. There is nothing we can do, they would explain. The system simply will not change.

It seemed as if the entirety of our society was deliberately pushing itself into denial, if not outright self-destruction. People militantly refused to see the obvious. Resentment, self-pity and helplessness hung in the air.

Many of my cohorts went off on tangents looking for symptoms to blame as if they were causes. Most blamed the rich, some blamed the Jews, others found more nuanced groups to attack like Bilderbergers or Freemasons. I have a simpler suggestion.

Much of this relates to what Bob Black writes in “The Abolition of Work”:

My minimum definition of work is forced labor, that is, compulsory production. Both elements are essential. Work is production enforced by economic or political means, by the carrot or the stick. (The carrot is just the stick by other means.) But not all creation is work. Work is never done for its own sake, itâ€™s done on account of some product or output that the worker (or, more often, somebody else) gets out of it. This is what work necessarily is. To define it is to despise it. But work is usually even worse than its definition decrees. The dynamic of domination intrinsic to work tends over time toward elaboration. In advanced work-riddled societies, including all industrial societies whether capitalist or â€œcommunist,â€ work invariably acquires other attributes which accentuate its obnoxiousness.

Usually â€” and this is even more true in â€œcommunistâ€ than capitalist countries, where the state is almost the only employer and everyone is an employee â€” work is employment, i.e., wage-labor, which means selling yourself on the installment plan. Thus 95% of Americans who work, work for somebody (or something) else. In Cuba or China or any other alternative model which might be adduced, the corresponding figure approaches 100%. Only the embattled Third World peasant bastions â€” Mexico, India, Brazil, Turkey â€” temporarily shelter significant concentrations of agriculturists who perpetuate the traditional arrangement of most laborers in the last several millennia, the payment of taxes (= ransom) to the state or rent to parasitic landlords in return for being otherwise left alone. Even this raw deal is beginning to look good. All industrial (and office) workers are employees and under the sort of surveillance which ensures servility.

But modern work has worse implications. People donâ€™t just work, they have â€œjobs.â€ One person does one productive task all the time on an or-else basis. Even if the task has a quantum of intrinsic interest (as increasingly many jobs donâ€™t) the monotony of its obligatory exclusivity drains its ludic potential. A â€œjobâ€ that might engage the energies of some people, for a reasonably limited time, for the fun of it, is just a burden on those who have to do it for forty hours a week with no say in how it should be done, for the profit of owners who contribute nothing to the project, and with no opportunity for sharing tasks or spreading the work among those who actually have to do it.

Societies commit suicide when they become insufferable. Work makes them insufferable, because instead of serving a function, people serve as functionaries of image. This is worst in democracy, with its handmaiden consumerism, where image really is more important than reality because it is what convinces voters to vote and shoppers to buy.

Two hundred years ago, we had roles with clear goals to them, and we were rewarded for them. Now we have jobs, where the role is the job itself, and the reward is the only motivation. Much as we separated sex from marriage, we have separated work from goal, and the result is complete breakdown.

People are not “waking up” because work has crushed them. They either take low-paid jobs for lower stress and live in middle class suburbs where one can never escape the poor judgment of others, or take high-paid jobs and give their lives to them then miss their former power when they retire and die out of pique. Jobs take souls.

The best of our people have the least interest in fixing anything because they have a simple message for society: DIE. They resent their jobs, which are basically servitude to people who are stupider than they are but have more time to become “important” in the job hierarchy, and they find the stupidity of their clients or customers appalling. They have become slaves to stupidity and through that, stupor. Their brains could not recognize the crisis even if it were in front of their noses, and even if they did, they would cheer it on. Destroy this miserable place.

If conservatives want to start a revolution against the Revolution, the best target is work itself: get people working fewer hours by removing all appearance-based standards of conformity, including most regulation. Send as many workers home as possible by eliminating all make-work, and pay them to guard empty lots or watch out for pedophiles instead. Get people off the death trip that comes with the inevitable misery of jobs, work and obedience.

Nullius Mihi Culpa | No one cares about your fair cause