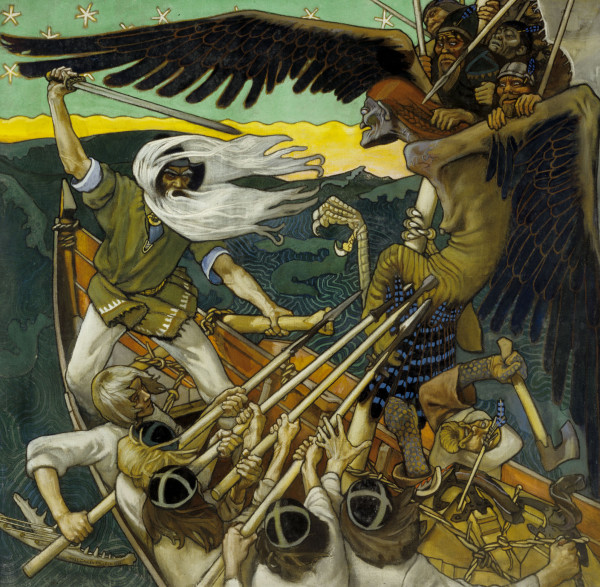 Donald Trump has forced his way into the 2016 election by addressing an issue no one else will talk about. Like Nigel Farage, he is a businessman who knows that when the herd is in denial about a relevant fact, it can be exploited. He has and now has beaten all of the Establishment competition.

The immigration debate achieves two vast changes: first, it smashes the politically correct narrative that holds that white people are always the bad guy and must accept the rest of the world — which happens to live in mostly third-world conditions — as their new replacements. Second, it has reintroduced nationalism, or the idea that a nation is defined by heritage, as a form of self-defense against an increasingly crumbling democratic world order.

In particular, the explosion of the immigration debate in the US, UK and Europe has forced us to focus on the paradox of social justice logic. Under that ideology, it is acceptable for any group to have self-interest, except European-descended peoples. This fits with the Leftist paradigm that insists that if some have less than others, it is because they were victimized by those others, not because the people with less could not produce it.

Increasingly, European-descended peoples are realizing that we cannot support the third-world masses, who outnumber us 19 to 1. We are also figuring out that they all want to come here for our social welfare programs, which makes us want those programs gone, too. Finally we are realizing that our fortunes and social orders have collapsed since we abandoned the principle of nationalism.

Nationalism and democracy cannot coexist. “Equality” originally meant political equality. But, since people make those political decisions, it quickly extended to insisting all people are the same. This is because unless we do that, it becomes apparent that those who are less prosperous are making worse decisions than those who prosper. The problem is that we can have one of two: all people are equal, and therefore all nations could be prosperous but because of their decisions, or that equality is nonsense, and some nations rose because of their inherent abilities. Democracy requires equality to be anything more than laughable, and so it excludes nationalism whenever it can.

This gives rise to the paradox of nationalism. If nationalism is bad, non-whites should not have it either and the Black Panthers should be a hate organization just like the White Riders. But if nationalism is not innately bad, then it is admirable for non-whites to be nationalist — and also for European-descended people, including Western Europeans (“whites”) to do so. This realization causes panic in the Leftist camp, who under the guise of “equality” wish to destroy all social order so the individual has no restraints on his behavior including the destructive and selfish acts which neurotic people seem compelled to do.

Nothing illustrates this more than the attack on Donald Trump for becoming popular by opposing immigration. As one writer made clear:

Writing in the conservative American Spectator, Ross Kaminsky says that Trump’s plan to deport illegal aliens is “shameful” and makes a not so thinly veiled comparison of Trump to Hitler:

His plan to require businesses to ‘hire American workers first’ has the stench of xenophobia backed up by the fist of government. Perhaps as a Jew I’m overly sensitive, but when I hear Trump speak I can’t help but think of ‘Germany for the Germans.’

As pointed out on this blog long ago, the origin of modern nationalism comes from the Jewish experience. The diaspora began when the Romans cast out the Jewish people from their ancestral homeland, Israel. At this point, Jews expanded into the middle east and finally Eastern Europe, then Western Europe. While they benefited greatly from European methods and genetics, the Jewish people found themselves the frequent target of pogroms from left, right and unaligned groups. Theodor Herzl tackled this topic in his writings, and found that the cause of anti-Semitism was that Jews by not having a national group and homeland became inevitable targets for not assimilating. At the same time, assimilation would mean self-destruction. Herzl concluded that the only solution to “racism” and anti-Semitism was for Jews to move back to Israel, ending the diaspora.

Unfortunately, as the old “in Soviet Russia” jokes go, under democracy, you do not go on diaspora… diaspora comes to you. Leftists want Israel to admit anyone who wants to move there, specifically the “Mexicans of the middle east” the Palestinians, who lag 25 IQ points on average behind their Jewish counterparts and would be at home in a third-world society but out of place in a first-world one. If the point of WWII and The Holocaust was that Jews need safety from persecution, that includes safety from persecution and genocide by “soft” methods, such as forcing them to accept non-Jewish people among them until by inevitable entropy and the poor choices of young people in choosing mates, they are bred out of existence. The choice again is alienation or assimilation.

In other words, the victims of what we assumed was a problem with nationalism have rediscovered the necessity of nationalism. Assuming nationalism is not the problem, we see WWII in a different light: the Jewish people needed a homeland, and they were excluded from it by the British occupation, which led to inevitable conflict that ended in Jewish genocide under the far-right in Germany and under the far-left in Eastern Europe. The problem was not nationalism, but as Herzl observed, diversity. While democracy requires diversity for the pretense of equality, it causes inevitable friction as it forces plurality upon populations that require the direction given by culture and identity.

The Left will do whatever it can to suppress nationalism because democracy cannot coexist with a notion that a specific type of inequality, specifically allowing people to separate by commonality, provides a better way of life than the great equal collectivist melting pot. For the last fifty years, they have used a Marxist concept, “political correctness,” to enforce a fear of “racism” which is a broad, undefined category fudged to include nationalism. Even Pravda-on-the-Hudson admits that the Leftist gambit of political correctness has failed:

â€œPeople are starting to see, I believe, that all this political correctness is garbage,â€ he said. â€œI think heâ€™s echoing what a lot of people feel and say.â€

The walls are falling. These walls are conceptual and designed to limit our thinking. They were erected by Leftists to manipulate us into accepting equality, and therefore, needing democracy, which by its nature as mob rule always leans to the Left. People like illusions, and in groups they vote based on individual fears at a lowest common denominator level, specifically “I don’t want anyone telling me that I am wrong no matter what I do” and “I want government to protect my feelings.” The Left, addicted to the fundamentally dishonest notion that civilization can exist without social order, has invented new lies every week to justify its parasitic and malignant mob rule.

Normal people, who tend to be open-minded, fall for this sucker punch every time. They accept the “new” ideas — really old ideas in new clothing, like rock bands in different costumes who use weird instruments but play the same old song — as important and scientific. They do not realize that Leftism is eternal: it is a pathology of selfishness hiding itself behind altruism, which is a form of passive-aggressive self-interest. Altruism provides a cover which allows these people to demand society support them, and accuse those who resist of some kind of ultimate sin against equality like “racism,” classism, homophobia, sexism, etc. Leftism is a pathological individualism which sacrifices society itself to the fears of the individual.

Like evil, Leftism arises in every generation. When a nation is strong, it opposes it, but if it has encountered tragedies — Mongol invasions, the Black Plague, the Muslim invasions that provoked the Crusades — it may lack the strength to fight its enemies at home. And yet these enemies at home are what destroy a nation by dividing it against itself. They corrupt its language, distort its image of what is right, and send it down the path to doom. The failings originate in the individual but spread through the inability of a society to discipline its neurotics, pathological liars, and other defectives whose insanity arises from individualism replacing a compulsion to do what is good. In other words, by turning from good, they turn toward evil, and the root of evil is in the self. No wonder the collected selves demand “equality”!