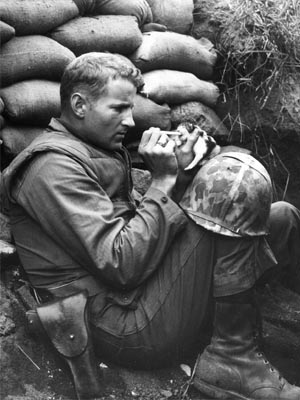 The men’s rights movement is wasting its time crusading for “equality” when it should be focusing on defining masculinity.

If you want to know how men are really under assault in our blessed-are-the-meek culture, it’s that masculinity is distorted by social and media factors. As a result, no one knows what it is and so almost no one values it.

One reason that people like me turned from liberalism is that liberalism is part of that blessed-are-the-meek culture, and so it will never value masculinity, which is the opposite of meekness. Masculinity is not easy to define but it is clear what it is not.

When I think of what defines masculinity, what comes to mind is this: being male is a role, which comes with honor and pride. We are those who create things and fix situations. We are the guardians and the advance scouts, the conquerors and inventors, and also, the supporting force of community.

My favorite comment on The Spearhead came from user â€œCorky Againâ€:

The idea that full manhood is achieved only through financial stability, marriage and family is a womanly way of looking at manliness. It makes women the center of the male universe, and implies that success or failure as a man is directly related to achieving female approval. – Jack Donovan

These writers bring up an interesting dilemma: is masculinity conquest, or family life?

My answer: conquest and family life are two prongs of the same attack.

Women are the anchors of civilization. They form a fixed element that adapts, nurtures, nourishes and advances. They are essential, and femininity is an essential principle. Nature invented femininity for the same reason the framers of the US Constitution had both a Congress and a President: balance.

Masculinity is not “everything which is not feminine” — that would be a truly woman-centric view. On the other hand, masculinity is the principle I’ve mentioned above, which is creating and fixing. Women are the anchors of civilization, but men are its founders, advancers and curators.

The same impulse that makes us long to conquer and subjugate also makes us want to create, including families and communities.

When that impulse gets blocked, the result is not meek men settling down to stable homes, but men translating their meekness into any kind of crazy fetish they can:

The object of the bronies’ fascination is “My Little Pony: Friendship is Magic,” a remake of a 1980s animated TV show for preadolescent girls featuring plucky, candy-colored equines.

After the show launched in October 2010, video clips began appearing on 4chan, a website that largely draws geeky, tech-savvy guys. Before long, the bronies were born. They started holding local get-togethers, from Seattle to Brooklyn, where they recognized each other by the paper Pony cut-outs tucked in their shirt pockets. They’d discuss the latest shenanigans of Ponies with names like Twilight Sparkle and Fluttershy. – The Wall Street Journal

These are some very confused people. This society has replaced the idea of masculinity with an idea of men as perpetual boys who want their toys, their entertainment and occasional sex — but on a woman’s terms (bring a condom and flowers). Men are kept men in this time.

As a result, women are taking over in industry and social functions that once were better served by men. This increases the spread of blessed-are-the-meek culture, and a certain unfavorable light to all things truly masculine.

We will not succeed in re-asserting masculinity by attacking its wholesome principles in order to defend its more interesting ones (conquest, war, murder). But it’s important to remember this isn’t an either/or: many of history’s greatest conquerors were also proud family men and active in their communities.