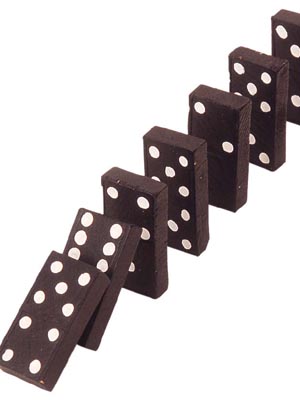 For thousands of years the world was big.Â  A man’s only concern was his family, his community, and his nation.Â  Even at the national level, news took days to arrive.Â  It took a full day for Pheidippides to run from Athens to Sparta in order to inform the Spartans that Persian forces were invading.Â  Even as recent as the Civil War era, one can imagine that news from across the country took days and only the most important stories were considered.

Today the world is small.Â  Every news story from every corner of the globe is right there in front of you, on your computer screen, within minutes.Â  Furthermore, the news is an odd combination of the lurid/sensational/ultra-violent but also the twee/inconsequential/feel-good.Â  The most horrific and the cutest – massacres, catastrophes and kittens rescued from trees.

Is man cut out to reconcile so much disparate information so quickly?Â  The world was large for thousands of years then in a mere 100 years, the world has rapidly become smaller and smaller.Â  Our social reality is out of sync with our biology.

Man was not meant to hear about and reconcile the news from all corners of the earth.Â  Understanding the dynamics of a county or state is hard enough, let alone an entire country, let alone the entire world.Â  It is no surprise we neglect our own backyard as we hear of more sensational stories from abroad.Â  Rather than prioritizing on the basis of proximity, we prioritize on the basis of what is most sensational.Â  But as we are distracted from our own problems, they grow and grow.

We are not only distracted, we are also desensitized.Â  When we are bombarded with news of natural disasters, riots, death, and violence, we slowly become numb to these things, in general.Â  As post-modern theorist Jean Baudrillard formulates:Â  information annihilates meaning.Â  When all we hear is murder, rape, arson, they begin to lose their impact.

Being “connected” to the world has its upside.Â  But perhaps our instant mass-communication system has connected us in ways which we never bargained for.Â  It not only distracts and desensitizes decent people, it also connects and empowers the indecent.Â  Perhaps we are a little too connected.Â  Mass hysteria is a well documented phenomenon.

This phenomenon of mass hysteria or chain reactions manifests itself in many different forms:

Honest show of hands:Â  who even remembers that the Interstate collapsed into the Mississippi river only four years ago!?Â  Miraculously, only 13 people died, but strictly as a visual, it rivals 9/11 in terms of resembling a Hollywood disaster movie.Â  Not only does this catastrophe symbolize America’s infrastructure literally collapsing, it also symbolizes our desensitization to catastrophe in general.Â  Call it an intuition or a hunch, but this event seems oddly forgotten about by the media and the American people.Â  Perhaps this is, already, the temporal chain reaction of 9/11 manifested as desensitization.

Our non-stop news cycle, which is not even a cycle, but a perpetual onslaught, distracts us with the most sensational and lurid, and desensitizes us to catastrophe in general.Â  No wonder the West is going to hell in a hand-basket and we are talking about Hank Williams Jr.

The vulnerability of being connected should be understood.Â  If something is stretched far and thin it becomes that much more vulnerable at any one point.Â  All it takes is a thug with a vendetta, or a news story sensational enough, even if it’s thousands of miles away, and the chain reaction is underway.

On the other hand, if something is consolidated it is much harder to puncture.Â  With this in mind, the value of being insulated gains its full power and takes on a positive connotation.Â  It is a survival technique to avoid being swept away in mass hysteria.Â  Turn off, tune out, and re-connect with reality.