Living for the Herd 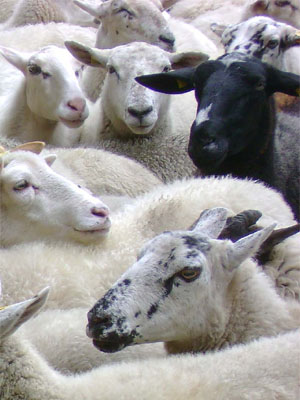 Modern psychology is in its infancy. It has so far busied itself with the easiest confusions of the human mind, and not looked deeply at all into the day-to-day mundane insanity that infests us and moves easily among us.

In another 200 years, psychologists will have made extensive study of the herding (sometimes called group-think, hive-mind, or peer pressure) instinct in humans. Like other animals, we herd up when faced with a challenge. This is an obsolete response when we face personal challenges that don’t involve others.

However, our tendency is to involve others in our personal challenges. The reasoning is that when faced with a problem, we have a chance to respond and thus a chance to get it epically wrong. If that happens, others will see and judge us as being defective in some way.

We cannot avoid being wrong some of the time, but we can avoid being judged, so we try to change the minds of others so that they think failure is success. One way to do this is through morality. “I did it for the children” will work. The failure becomes a moral success.

Another way to fool others is to insist on equal validity of all outcomes. This is philosophy-speak for what happens when people say “I meant to do that” after they screw up spectacularly. If you lunged for cake and ended up eating feces, insist that it was performance art or religion and others will forgive.

Still another common phenomenon is the one we recognize from children’s tales as “sour grapes.” If you lunge for something, and fail to attain it, make sure you bad-mouth it. The children of rich people who camped out at OWS might have been saying “We have failed at being rich bankers, so burn the rich bankers!”

To this list we can add another method of evading a feeling of responsibility for the outcome of our actions: we can set up a herd of our own that validates us on the basis of nothing more than belonging to the herd. It’s like a multi-level marketing plan, except based on social approval.

For example, if I go to the local high school and I don’t fit in or particularly succeed at anything, I can rope together all the nerds, geeks, dropouts, druggies, freaks and outsiders and have a little herd. We can then agree that we’re great and everyone else is bad and thus we support each other.

Even more, like a ghetto gang, when one member is attacked we attack with the strength of numbers. One 250-lb football player is piddling change against 50 angry geeks armed with feelings of justified vengeance.

The internet has enabled us to take herdness to new heights. For example, internet humor:

Person 1: I came up with this new hilarious thing.

Person 2: But that’s not funny, really.

Person 3: It’s so not funny that it’s funny. Other people won’t get it.

Person 1: You just don’t see the humor in it. It’s an acquired taste.

The main phenomenon of the modern time, thanks to the breakdown of organic social order, has been the formation of these little herds and then those herds imposing their “truth” on the population at large. It’s no wonder people are so confused — reality itself is buried under mountains of human “reality” that are nonsense.