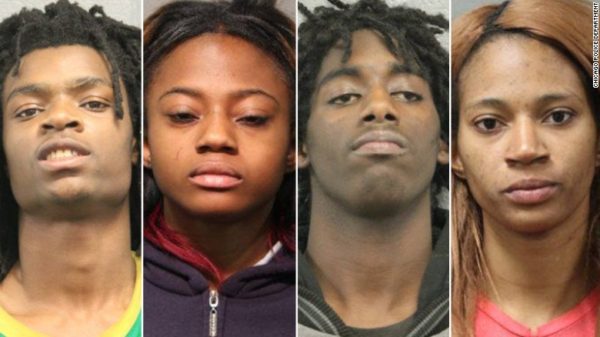 On January 4, 2016, America was subjected to the sight of four African-American youths abducting, torturing and most importantly humiliating a disabled white youth:

A day after Chicago police said they were questioning four people about a â€œsickeningâ€ video showing the torture of a mentally disabled teen, a second video has surfaced showing the suspects forcing the young man to drink out of a toilet.

Police have said the 18-year-old victimized in the videos is a northwest suburban resident with special needs who had been reported missing.

…Several people can be seen laughing and eating during the attack, in addition to making disparaging remarks about President-elect Donald Trump and using racially charged language. At one point, while the victim is backed into a corner, someone is heard shouting â€œF*** Donald Trump. F*** white people.â€

The fascinating with Donald Trump was also seen in another attack in Chicago two months before in which a white motorist was hit by a black driver, and when he asked for insurance information, was attacked by people shouting anti-Trump and anti-white slogans.

Our media has carefully obscured this point: for minorities, the Donald Trump election is a clear victory for white people. White people, who are still mostly acting under the assumption that we can make diversity work somehow, have not yet figured this out, and so to them it seems more of a political disagreement than a racial one.

The kidnapping in Chicago put an end to all of this. It became clear that “Trump” and “white” were synonymous in the minds of the attackers, who clearly resented this re-assertion of white identity and self-interest, mainly because they perceived that it meant an end to America viewing itself as a custodial arrangement for minorities to be financed by whites. Ethnic self-interest is a zero-sum game.

What made this case interesting was that at first, the police refused to consider it a hate crime. Some in the LÃ¼genpresse then tried to spin it as a hate crime, but against the mentally disabled, not white people. This was made difficult by the words of the perpetrators, as reported by a traditionally Left-leaning segment of the media:

This meant that it was hard to obscure the fact that this was a crime of racial resentment, motivated by a desire to act against whites/Trump. As the earlier Chicago attack showed, to African-Americans, the two are often equated. This means that screaming “F*** Trump” at a white person is roughly the same as howling “F*** MLK!” at a black person.

Outrage in response came from more corners than expected, in greater strength, and instead of hiding this on the back pages of media like the Christopher Newsom and Channon Christian in Knoxville, TN that happened a decade prior, this time the police and attorneys were motivated to consider this case a hate crime, mainly because legally it fit the profile:

Goff said that the casting of racism as an evil worthy of condemnation made all the ways white people expressed their bigotry taboo. Those taboos are, in part, what people are referring to when they rail against political correctness. And while those new constraints certainly didn’t end racism, they suppressed behaviors that created space for people of color to live more fully in America.

…In calling the kidnapping and assault racism, we’re staking claim to moral language â€” and uniquely powerful moral language â€” to which white people can’t easily lay claim, even in cases like the one in Chicago, which seems to qualify for the most vehement reproach available.

… One way to argue that the evil of racism is not uniquely wedded to whiteness is to argue that it is a moral failing that lives equally in blackness.

In other words, hate crimes laws were intended to protect blacks from whites, so using them in the other direction upsets the social assumptions under which they were created. And yet, if racism against one group is wrong, racism against another is also wrong, no matter who the perpetrators were. In other words, whites no longer perceive themselves as the group in power responsible for all racial wrongs; diversity means that any group can be racist.

The shocking lying media should have seen this one coming because the warning signs were evident a year earlier when it was revealed that most whites thought that unjust treatment of blacks was mostly resolved, but racism against whites was rising:

A new poll shows a large number of Americans believe discrimination against whites has become as much of a problem as against blacks and other minorities.

According to the poll released Wednesday by Public Religion Research Institute (PRRI), 43 percent of Americans think discrimination is just as big a problem for White people.

In addition, white people thought that the many laws and billions of dollars designed to ensure equitable treatment for blacks were working, and as a result, few of them believed that blacks faced unfair treatment in the workplace and law:

In the white mind, racism was over: it was no longer acceptable to publicly express or act out racist ideas by white people, as enforced by white people. If any gaps in outcome remained, that was the fault of something else, which meant that the success of non-whites was no longer contingent upon what white people did. “We fixed our problems, and the rest is up to you,” white America was saying.

This meant that when the tables turned, and we had a highly visible case of non-white racial sadism, white people were ready to call it a hate crime — even if the media, who leans heavily Left, was not. But in this case, public opinion beat back the controlled and lying press, and race relations were redefined as different ethnic groups in competition, rather than evil whites hurting angelic others.