Racial Attack And Carjacking Against White Man In Chicago 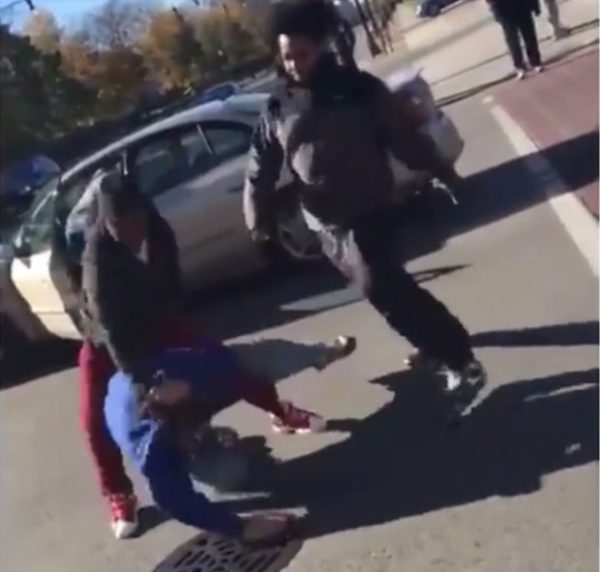 Let us wander down memory lane, since this event will be crucial in future understanding of how anti-diversity politics — as distinct from anti-white or anti-black politics — rose in America. On November 10, 2016, a racial attack and carjacking in Chicago changed how Americans viewed our post-Obama future:

David Wilcox, 49, said he was about to turn left from Kedzie Avenue to Roosevelt Road around 1 p.m. Wednesday when a black sedan pulled up and scraped the right side of his Pontiac Bonneville.

“I stopped and parked. And I asked if they had insurance, and the next thing that I knew they were beating the s— out of me,” Wilcox said Thursday.

…As the fight picks up, people on the sidewalk away from the struggle yell taunts that include “You voted Trump,” “Beat his ass” and “Don’t vote Trump.”

The LÃ¼genpresse immediately seized on this event and gave it a spin: This was not an anti-Trump attack, but a car accident and theft. But that sidesteps the real story, which is that this was a racial attack, and that Trump was only significant as a symbol of white self-interest awakening, which threatens other racial groups because it means they are not given a de facto position of angelic victim who is always right and deserving of subsidies from the white population in order to be made equal.

Certain factless fact-checkers like Snopes made a big deal of the fact that this began with a car accident and therefore was not a “political” event, if we limit our understanding of “political” to the question of voting for Trump. They deny that this was fundamentally an incident of racial violence:

Wilcox said he did vote for Trump on Tuesday, but no one in the crowd would have known that. He said the taunts appeared to come from people watching the beating, including one person at the bus stop who he heard say, “Yeah, it’s one of them white boy Trump guys.”

…Wilcox said he voted for Trump because “he’s gonna bring back the economy. I believe he’s gonna be the one to protect the (nation). I know he doesn’t speak politically correct sometimes, but 95 percent of the country doesn’t.”

What makes this interesting is that the newspaper noted the races of the perpetrators and victims in the first news story about it, something that was until recently taboo. The outrage at this incident also took more of a general anti-diversity sentiment, migrating from “Our multicultural society would be great except for these violent Africans” to “I don’t think this diversity thing is going to work out.”

To give these events historical context, Americans elected Barack Obama twice for the same reason they elected Bill Clinton: to end the racial fracture of this country. In their dimwitted view, Americans thought that the country was a proposition nation, or solely a creation of politics and economics, as expressed in this speech by former President George W. Bush:

The proposition nation is a creation of equality. With equality, we believe that inner traits such as intelligence and character are not important, and external traits such as willingness to slave through two decades or schooling or “work” twelve hours a day at a cubicle job are what distinguish people. This is entirely an outpouring the worker’s philosophy of the peasant revolts, French Revolution and Marxism: people are equal, so those that serve the people as a whole are worth more, and nothing else is important.

As the grip of Leftism fades, people are seeing that inner traits are more important than external ones. Good moral character and intelligence are more important than working hard on pretend work and time-fillers, and natural ability is more determinative of success than willingness to memorize facts, rules and laws. Arising from that, we can reject the idea that there is a universal brotherhood of workers independent of race.

Along with that realization comes the similar recognition that each racial group acts in its self-interest. Blacks suffer from the loss of Obama because he fought for their interests. Under diversity, we share a society, which means that self-interest is a zero-sum game, a concept from game theory about what happens when resources are shared:

A zero-sum game is one in which no wealth is created or destroyed. So, in a two-player zero-sum game, whatever one player wins, the other loses. Therefore, the player share no common interests.

Astute readers will note the implicit comparison to the tragedy of the commons:

The only relief from the tragedy of the commons comes when everyone in a society is working toward the same purpose and has agreed on the same principles, but these naturally vary between ethnic groups, mainly because each group must differentiate itself by having distinct values, language and culture in addition to distinct genetics.

Since this is true, ethnic groups do not share self-interest, but have conflicting self-interests, which is why diversity can never work. The Chicago beating of November 10, 2016 is just one of the steps along the path to that realization as modern citizens awaken from the utter stupor of addictive ideology and begin to rediscover reality again.