by Jonathan Peter Wilkinson on November 16, 2021 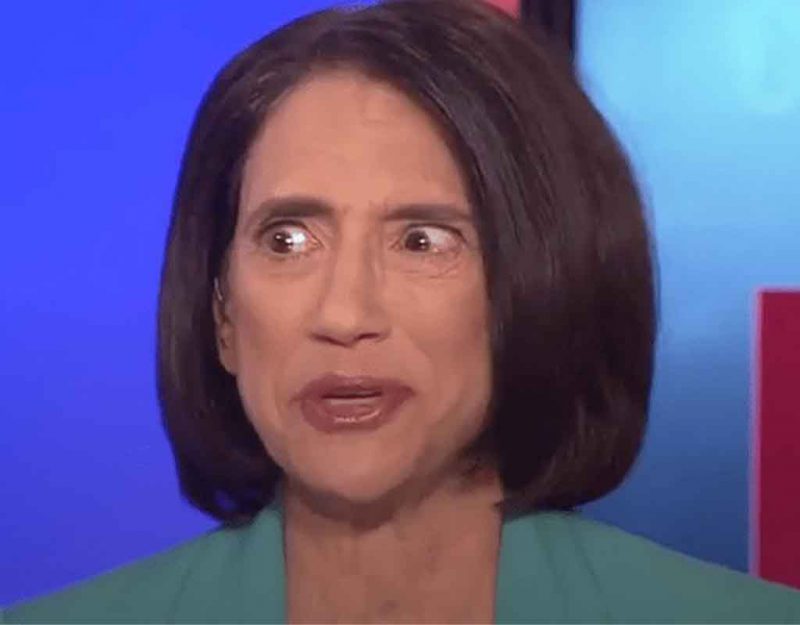 The lizard people look ugly when they run out of skin-suits. The longer a person lives, the more their appearance becomes a résumé. Webster’s dictionary describes physiognomy as “inner character or quality revealed outwardly.” This happens as time exacts a certain measure of justice against us all. We don’t change a whole lot over time. We just become more of what has achieved ongoing survival.

Declan Leary recently crowned Jennifer Rubin as the greatest opinion columnist of our time. I think he meant it as a harsh description of what has happened to opinion journalism in the current era of cancle culture. His description of Jen follows below.

Now, let me be clear. I think Jen Rubin is our greatest living columnist in much the same way that I think Nic Cage is our greatest living actor: committed 100 percent to the bit, while simultaneously absorbing it into a self that is inscrutably bizarre. All at once the role is reduced to the level of absurdity, elevated to the level of art, and intertwined with the person of the artist.

For Rubin, the role is a particular kind of boomer conservatism, heavily influenced by what some (including her, with not much self-awareness) have called “Trump Derangement Syndrome.” Not so much stealing the Declaration of Independence as standing in the middle of a D.C. street waving it in the air, yelling incomprehensibly about threats to our democracy. This role is the pinnacle of a glorious tradition, and Rubin is a perfect if unlikely player. This is Nic Cage as King Lear.

Now rather than insulting The Baby Boomers more than I already have, I would simply point out that (((Jennifer Rubin))) is more of a Jungian archetype than a generational icon. Jennifer Rubin is the archetypal Karen. In the absence of anything resembling intellectual knowledge, she takes charge. If she’s waving anything around in the air, she won’t stop until she speaks to The Manager!

She may never possess anything profound to say to The Manager, but it matters to her that she gets to speak to that poor individual with the office right at ground zero. Jen Rubin is important because she gets to speak to The Manager. Everyone should listen to Jennifer Rubin. Karen’s Rules prohibit using military grade hearing protection to keep the stupid banality out.

Jennifer Rubin is neither Right nor Left. She is an attention vampire. This is not an ideology; it is an addictive lifestyle choice. Whatever “it” represents in the present that becomes a mulligan in the B-Movie “Life of Jennifer Rubin.” This makes her take on a series of skin-suits that enable her to get a piece of the current action. Leary’s description of Rubin’s background makes this apparant.

Jen hasn’t always been this way. After two decades as a California labor lawyer who was voting as late as 2004 for the likes of Kerry/Edwards, Rubin was suddenly a mainstream neocon of the went-to-Berkeley variety (funny how that happens) sometime around 2005. In 2011 she was hired by the Post, and spent a while pushing for the liberal Mitt Romney to become POTUS the next year—until the election was over, at which point Romney’s platform became right-wing extremism.

Then the apocalypse: In 2016, the scary Orange Man ascended to the Oval Office. Rubin pivoted from beating the drums of war to sounding the alarm bells: America was under attack from within. Four years of panic and then, once the Resistance delivered the great hero Joseph R. Biden to replace him, everything was okay again. Jen commemorated the event with a book I have not read and will not read subtitled, no joke, “How Women Saved Democracy from Donald Trump.”

The ideology of the day matters not. The train will move on. Jennifer Rubin follows the new circus the way Deadheads trailed after Jerry Garcia. Eventually, politics experiences the entropy of a dying empire. Jen can now wear a skin that allows her to play Karen and speak to The Manager. At that point, the scales of the lizard become obvious.

Getting back to Leary’s condemnation of opinion journalism. It no longer even features enlightened polemic. Opinion journalism becomes an exercise in concealing the inner lizard. Wearing the right skin matters more than composing an original argument. As societal entropy overdetermines political dexterity, avenues for originality disappear along with the energy that would allow new solutions to Amerika’s vexing laundry list of problems.

If our greatest current opinion writer is a visible lizard person, then there are no new ideas. Lizard people lack the power to create. They steal, they mimic, and they wear camouflage. When you actually see the lizard, that creature has no new skin-suits to conceal the inner hideous. If (((Jen Rubin))) can no longer hide her ungliness, then her occupation has run out of worthwhile ideas.

The sighting of the real (((Jen Rubin))) symbolizes a deeper malady. Uber-Karen can yell at The Manager. The Manager can just shrug. “Who is John Galt?” He might inquire. Jen Rubin would not possess a clue.

She is still making damn sure she is in charge despite her complete lack of ability. That sort of offensive stupidity goes around more rapidly these days than COVID-19. You can see that frightening singularity of regal, empowered, and condescending stupidity just by looking at her face.