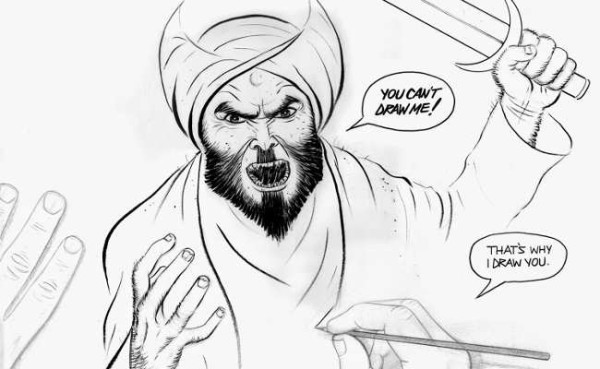 Diversity does not work. This is not surprising, since diversity is paradoxical: combining multiple groups destroys culture, and creates a society dependent on near-totalitarian nanny state rule. This applies to diversity of race, religion, ethnicity and culture.

Within that framework, it is clear that the West is under assault by immigration from the other 90% of the world that, not having adopted the methods and genetics of the West, remains in third world levels of poverty, bad hygiene, dysfunction and radical individualism. One group of immigrants that seem to cause additional problems are the Muslims, who much like Jews and Gypsies draw criticism for perceived self-serving insularity.

Without commenting on the truth value of that, since other sources surely offer many opinions on the topic, the recent explosion of interest since the killing of Charlie Hebdo journalists over their satyrical drawings of the Islamic prophet Mohammed has gripped public attention. The left, willing to excuse any group that does harm to the West, ignore the violence; the right points it out. Some point out that this is not a new issue, dating back to the original Kurt Westergaard cartoon and provoking many subsequent cartoons.

Some on the right have begun forcing the issue by having contests to “Draw Mohammed” much as American activist Pamela Geller did in Dallas, Texas at which point two terrorist supporters opened fire and were killed. With this collision of cultures seeming as inevitable as the Crusades, in which young Europe responded to Muslim invasions with a massive military effort, a new “Draw Mohammed” contest has been convoked in the United Kingdom:

In September 2015 Sharia Watch UK, Vive Charlie and Liberty GB will host the UK “Draw Mohammed” cartoon exhibition in central London. The event has been organised in honour of the cartoonists, bloggers and artists around the world who risk their lives in defence of free expression, and of those who have been murdered in this cause.

The organisers are delighted to announce that Geert Wilders, leader of the Dutch Freedom Party, will speak at the event.

Anne-Marie Waters, Director of Sharia Watch UK said: “It is vital, in this era of censorship and fear, that we stand together in defiance and demand our right to free expression. We will not, and cannot, succumb to violent threats. The outlook for our democracy depends on the actions we take today. We owe it to future generations to pass on the freedom we have enjoyed.”

To help make this event take place, we welcome your donations, large or small. Help us defend freedom of expression in Britain!

Further details of the event will be published in due course. Media enquiries to [email protected]

Ms. Waters also gave an interview to Breitbart in which she opined on the reasons for such an event:

Why would you arrange a Mohammed cartoon exhibition?

Because I am Spartacus and itâ€™s an â€˜I am Spartacusâ€™ moment. Those of who believe in free speech, democracy, and Western civilisation have simply got to stand up now; both to Islamists who seek to impose their religion on to our world, and to the government and media who refuse to effectively oppose them. The greatest threat to our democracy is this casual refusal to clearly state the importance of our speech, and the greatest threat to our speech is sadly coming from Islam. We have to stop expecting someone else to take the risk of standing up to the worldâ€™s bullies, we all have a duty now.

Donâ€™t we have a duty to be sensitive to Islam?

No, we do not. We are under no obligation to be sensitive to anyone about anything, but when the folk demanding sensitivity generally have little to say about brutal violence carried out in the name of their religion, then I think theyâ€™ve got a bit of a cheek demanding anything. Iâ€™m not talking about Islamic State either, Iâ€™m talking about Pakistan, Saudi Arabia, and other oppressive prison-states. We hear a lot from Islamic groups about freedom of religion, rarely in the context of Christians being executed in Pakistan however.

While these events seem transparently designed to provoke confrontation, as all but a few voices in media seek to conceal the problems created by diversity, integration, multiculturalism, internationalism and multi-racialism including Islamic integration into Europe and the USA, this event raises a necessary awareness about what is essentially a suppressed issue.