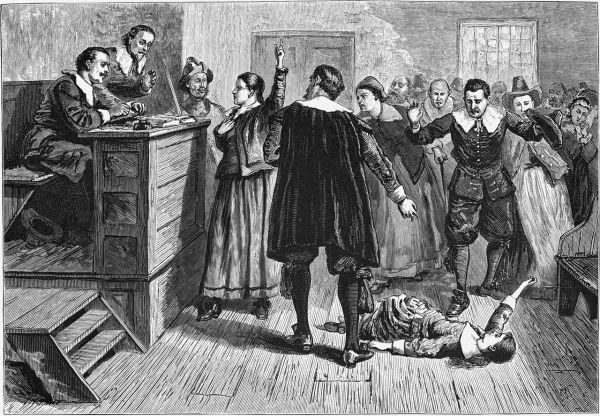 Innocent until proven guilty. What might have prompted our ancestors to adopt such a phrase, and to place it in such crucial areas that it was guaranteed to become a focal point?

This is America after all; a lovely place, but it has its glitches. The Salem Witch Trials occurred in 1692, four score and four years before the Revolution. This event and others like it were likely still in the minds of those who frame the Constitution.

Where abuses of a monarchy can be localized and dealt with, as a matter of quality, the re-occurrence of lynch mobs, trends, crazes, fads, vigilantes and riots shows us that a bigger problem is the basic monkey-like nature of human beings. When fear strikes, people gather and as a combined force obliterate all detail and nuance to thinking.

Thus a concern like “we are afraid for our community” becomes “MURDER THE SCAPEGOAT!” in the hands of a crowd.

I do not know if Bill Cosby did indeed drug and rape women from the 1970s through 2004. In fact, I know very little about Bill Cosby like I know little to none about most entertainment.

However, I trust history as a record not of what the victors said, but of what people were maneuvering to avoid. Witch trials, riots and lynch mobs are bad news.

It makes sense also to pay attention to the broader events in the West. Liberal ideas such as feminism are under assault because, having gained power everywhere, they have failed to improve anything and instead have gone on ideological crusades which make life worse. Men and women are more alienated than ever before, and women have a lower chance of achieving anything like happiness.

Like all failing ideological systems, the Social Justice Warrior (SJW) beliefs — Marxism, feminism, equality — are trying to rally the herds behind them by attacking ideological enemies. GamerGate was the most recent example of this, in which feminist and media leftist allies attempted to insert themselves in a field entirely unrelated to them, and got rejected by the indigenous audience of gamers.

Leftism resembles a lynch mob. But lynch mobs take many forms, and we should be intolerant of them all. Give Cosby his day in court; do not rely on only one side of the story, because there are more interests at play than simply telling the truth. Our forefathers would recognize the wisdom of this approach.

Children of war | Ignore advice from your enemies