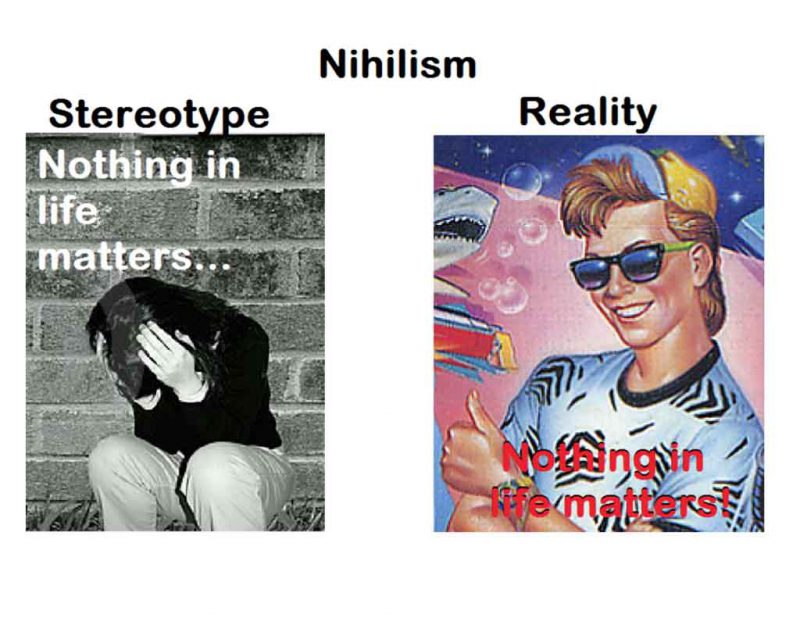 Combining conservatism and nihilism creates a worldview that confuses most people, since it seems to borrow relativism from the Left and realism from the Right. Those of us who are radical realists however see relativity as part of reality, and therefore relevant, leading us to nihilism.

This simply recognizes that people are different, with different abilities and experiences, and for this reason, nothing can be directly shared between them. They look at the same words on a page, and come away with a different understanding, even if a minimum can be communicated.

From that comes another idea, which is that we do not expect communications, values, or truths from the universe; we expect that these things exist in our heads alone, and sometimes we can communicate fragments to others through philosophy, literature, art, music, and drama.

That causes us to stop looking for writing on the wall and to begin facing the nihilistic nature of realism:

Camus asks the hard question: is there a reason to even continue existing if the universe is absurd and without purpose? Do we attempt to retreat back into Plato’s metaphor of the cave, embracing the shadows of what we thought the world was? Do we lose hope and decide to stand still, as the rock, which Sisyphus is cursed to roll uphill for an eternity, is left to roll back and extinguish us? Or do we allow the absurdity of the world to be our ultimate freedom, as we try to imagine Sisyphus happy?

To understand the coming answer, take a deep breath and go back to when you were a child. You did not think about the world, but your world. You knew your family, your neighborhood, your friends, and a few objects and observations about the world. The rest was a distant blur.

You expected no answers from it; after all, you could figure stuff out on your own. Childhood is the time of learning to do things and being massively impressed by it. It was only when you got into school, and introduced to books and the need to make others think well of you, that this changed.

Before the great shift which occurs sometime around fourth grade, however, you simply interacted with the world. Your gods, if you were aware of them, smiled on you from afar and each discovery you made. They manifested in the frogs and snakes you caught, or the wild sounds of the night.

Your life had no meaning except for life itself, and this was enough. There were things to discover, places to explore, adventures ahead. You had no need for absolute and universal assurances, since the only thing that was absolute was nature, and it had no need to be universal.

You did not look for writing on the wall; after all, you had no need to prove to others that your way was best, or in other words, pre-emptively defend it against the onslaught of everyone else wanting something else or wanting to tear you down.

Once you became “socialized,” the pursuit of absolute and universal truths took on importance for you. That way, when someone objected, you could say, “Look! Look there on the wall! The inerrant hand of God and/or Science has written the pure and immutable truth! Now, you obey.”

We can see here the crisis of civilization: in nature, we decide for ourselves. In society, the group must decide, or must grow up and choose its most competent and moral people to lead it, even when its individual members disagree with those people.

That in turn causes us to think in terms of “truths,” or absolute and universal facts in the form that humans understand them. These do not exist outside of our own minds; others interpret them, but there is no direct equivalency.

The same applies to communications and morals. We use tokens to suggest what we mean, but they are also interpreted by the listening parties. We can set up values, standards, or behavioral norms, but those in turn are interpreted, even when observed directly and not communicated through tokens.

Nihilism means this: there is no writing on the all. “There are no facts, only interpretations,” said Nietzsche, and we know from the Dunning-Kruger Effect and common sense that these interpretations are not shared and in fact, often wildly differ.

Now we are ready to approach the question of meaning.

The sophomore philosophy class asks, “Does life have meaning?” and immediately splits into two groups. Group A finds some universal that it claims gives meaning, like “empathy” or “compassion.” Group B says it has no meaning except that which we find in the self, an “I am my own god” type approach.

Both of these are nonsense, unfortunately for those who believe them. The correct answer is that meaning does not exist in an absolute and universal sense; as a corollary, personal meaning means nothing as well.

What remains? Adaptation. Like every other creature out there, you adapt to your reality. In other words, you preserve what consistently works and shy away from that which is inconsistent with that. You have your own knowledge of facts and reality and apply it as best you can.

This means that life has a meaning which is right there before us, but is not universal. A suicide has no use for adaptation, nor does a solipsist. However, we maximize our experience through successful adaptation.

When people ask me what the meaning of life is, I can only reply with, “to live, and even more, to live well.” This opens a vast world of possibilities, most of which are not material. In other words, I say life is participation in reality and adaptation to it, both physically and as thought process.

Does God exist? — no one will ever know. We can intuit his existence, but ultimately, we must all be agnostics, if we are honest. Does morality exist? — people choose their moralities based on the quality of their adaptation; the most perceptive arrive at a similar place, but not an identical one.

We do not need writing on the wall; we have something better: nature, natural order, and logic. We can adapt to our world and thrive in it, and from that intuit the presence of something greater in an esoteric context, meaning that cumulative knowledge reveals greater detail to the degree that it is pursued.

Some will find more answers than others. There is no answer for everyone, just like there is no equality. The meaning of life is life itself, and from that moment, the learning begins. Nihilism opens this gateway and gets us past socializing, sentiment, and emotion to seek life itself.