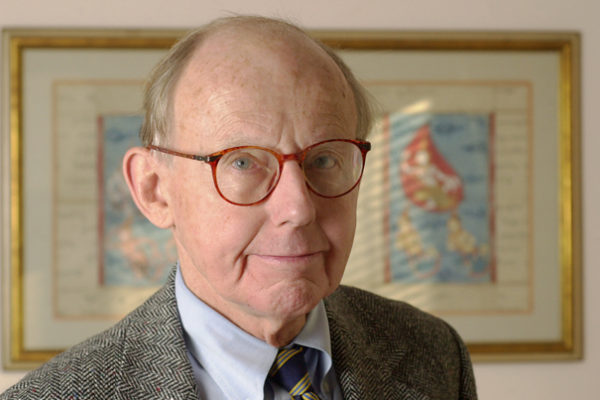 Samuel P. Huntington might be seen as the prophet of the Alt Right. In the 1990s, he wrote a paper entitled “The Clash of Civilizations” (later developed into a book, The Clash of Civilizations and the Remaking of World Order) which posited that ideology had lost its ability to hold societies together, and as a result, liberal democracy was collapsing while tribalism was rising.

He was engaged in an indirect debate with scholar Francis Fukuyama, who had argued that liberal democracy was the endpoint of human history, a conclusion he seemed to dislike but accepted as rational. Fukuyama argued for a permanent era; Huntington saw this era as ending.

In a broader sense, the two men were each arguing for a different type of civilization. Fukuyama believed in one unified by ideology and organized through rules and laws; Huntington saw civilizations as being united by physical, moral, religious and intellectual similarity, and predicted a future that relied more on gut instinct and identity than rules.

We can see this conflict playing out in the “populist” (really: upper half of middle class) wave that has propelled Brexit and Trump to the tops of the political heap by acknowledging that Huntington was right:

The central remark in Mr Trumpâ€™s Warsaw speech was this: â€œThe fundamental question of our time is whether the west has the will to survive. Do we have the confidence in our values to defend them at any cost? Do we have enough respect for our citizens to protect our borders? Do we have the desire and the courage to preserve our civilisation in the face of those who would subvert and destroy it?â€

Interestingly, the Financial Times included the following image with the article: 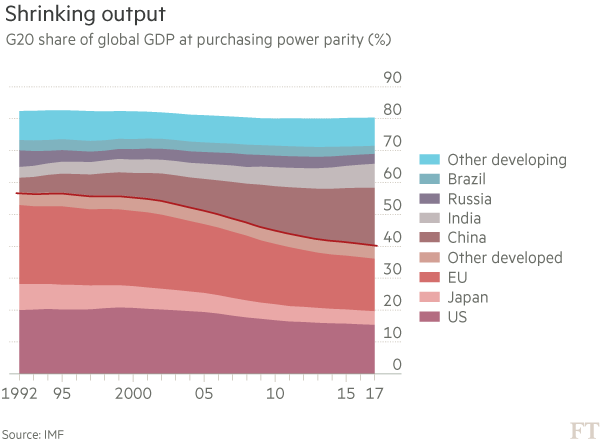 To the author of the article, it represents a reason to be afraid of “America first” actions, in that those might alienate and cut out those rising markets. But another way to see it is that it represents a declining first world with others taking up the slack. At that point, other nations rise to fill the gap, and the first world recedes into a rationalizing mindset which allows them to praise “the information economy” and “the service economy.”

Voters can be counted on to be oblivious as a group, but individual people start to snap out of their stupor when they realize that the thread is not some far-fetched prediction, but a certainty. Liberal democracy has chosen to self-destruct through thirdworlding and low reproduction rates which fit within its endgame, which is to destroy everything so that a few government employees can escape to enclaves for the rich and corrupt. This will come about through a consumer economy which will gut itself as the fake value it has generated collapses.

As this system hits rock bottom and it becomes clear that not only will it be a sure path to doom unless interrupted, but also that it was always a fake design just like the fake news, fake food, fake architecture, fake nationhood, fake love and fake friendship of modernity, the era of ideology will end and be replaced by real things which are innate to the human experience and not projections of the human ego. This will fortunate as unless we escape the modern lifestyle, we will likely die out from low reproduction rates.

Between its economic failures, the existential misery of its citizens leading to low investment in family and children, and the instability of the societies it has administered, liberal democracy no longer looks like a better option than strong authority and nationalism:

With global growth continuing at roughly 4 percent a year, the link between income and democracy isnâ€™t actually so strong these days.

…It is again time for the West to learn from China. The emotional force of nationalism is stronger than we had thought, stability is not guaranteed, and the Western democratic status quo ex ante is less of a strong attractor than many of us had believed or at least hoped for.

If you asked the average person what was more important, order or freedom, and no one else was listen to virtue police them, you will probably see someone struggling with the fact that what they crave now is order. The great quest to make everything equal turned society into a wasteland and, while this was survivable for some time, it eventually became a great burden. Now they want the bottom line: make stuff work, and leave people alone who are productive and healthy.

The age of tolerance is over. The average American middle class European-descended person has finally gotten it through their skulls that diversity itself is the problem, so it cannot be fixed with more education, law enforcement or welfare. Diversity causes us to hate each other. They are “over it” and want to see it go away. If the Right-wing “populist” wave continues, by 2030 the average American voter will be interested in repatriation with reparations and other schemes for a soft landing for the disaster that diversity built.

Much like people have simply come to view ideology itself, like all of our news which seems to be fake, as a deceptive and threatening thing. If anyone who imbibes even a little ideology ends up in the Full Soviet state to which the EU and US have sunk, then the path of ideology is completely fatal and needs to be avoided. In their gut instinct, people know this.

Even more, it has sunk in that the great war against inequality has simply ended up making other people wealthy who are not as competent as the original group, so most people have stopped caring, unless they are personally having trouble making a decent living. This is why people care less about equality than social order, despite what they claim in social situations when asked about politics:

Researchers found that 77% of participants were willing to redistribute income from rich to poorâ€”so long as it didnâ€™t make person A poorer than person B. Just 45% accepted the redistribution when it changed the hierarchy. The results showed people are both interested in equality and preserving the status quo, but if these two inclinations clashed, most participants would maintain the inequality.

…Researchers could only speculate as to why people are reluctant to upend the status quo. They suggest that it might come down to survival: We may want to maintain hierarchies for fear of sparking anarchy. Researchers note, â€œEvolutionary theory suggests that groups with stable hierarchies have a fitness advantage.â€

As liberal democracy lowers itself into collapse by its own ineptitude, people are turning to what is innate and what works. Heritage, gut instinct, making the trains run on time, and keeping happy families together have become more important than any words on paper or abstract ideological concepts. This represents a human return to sanity so that it can move upward, instead of “forward” to a dead Utopia.

The Consequences of Free Expression | Our Problem Is Not “Pathological Altruism”