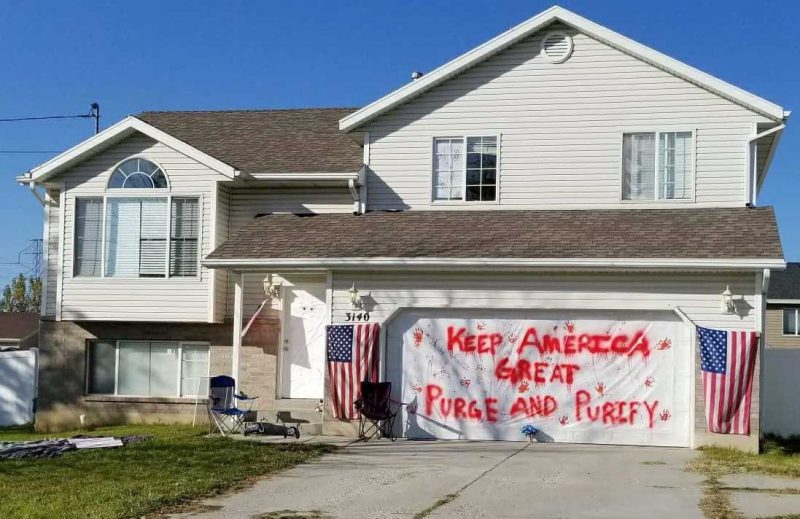 History happens to other people, we think, who live in lands colored only in sepia or rendered in bas-relief. This allows us to assume that the lessons of history do not apply to us, which is convenient because we do not want to be restricted by these rules.

Those of us who are Platonists view history in terms of cycles because all human actions require a long gap between when they are begun and when we see their full effects, and so people embark on what seem like rational choices, only to find out later that these were not what they needed.

We can view the “civilization cycle” in this sense, because societies start when people break away from others, set up their own way of doing things, but then lose sight of whatever they wanted to do and start doing the same dumb stuff every society does.

At Amerika, we analyze human history through “Crowdism,” or the idea that people in groups will do the same things unless restricted by hierarchy and given a purpose. Human decay consists of a group deciding to do what appeals to the group, instead of what is real and evident as necessary.

This decay consists of doing what makes the group feel united, and then managing threats to the group instead of focusing on goals of the group, which causes it to become controlling and eventually, dominated by tyrants.

On that path to tyranny the group, since it represents a centralized power that can be taken over by special interests, becomes a target in itself: many want to rule it by flattering its inherent tendencies (Crowdism) with ideologies, narratives, and rationalizations.

One of those rationalizations comes in the form of expanding the franchise, first from the naturally talented to the group, and later from the group to outsiders, since those tend to support the centralized power over distributed and organic forms like culture, heritage, and customs.

Through the history of Rome, we can see a gradual increase in diversity culminating in the loss of integrity to that society, followed by its downfall. As social order fragment, the authorities needed to become more powerful, so they brought in more obedient citizens.

If you hang around this planet long enough, you will learn to fear obedience. Those that you make obey you will gradually work against you. Since you set the standards, they agree, at first, but then revert to doing what benefits them.

Again, the Iron Rule: “All things — people, groups, ideas, systems — work only in their own self-interest alone.” There are no exceptions. Altruism is a lie; what we call “altruism” is usually people working to strengthen their group, which benefits them because it amplifies their successful actions through the emulation of others, allowing those to take on a life of their own independent of their creator. A great novelist is nothing without an audience; an athlete nothing without fans; a musician nothing without people to perform her works.

We see how diversity consumed Rome by breaking it into special interests, making it more concerned with infighting and wealth redistribution than looking toward the future, including producing more wealth:

Although Rome began as a humble city-state, within 800 years it had gained control over an empire extending as far west as Britain, south into North Africa and east into Syria, Jordan and Iraq.

As the empire expanded, contemporary accounts and archaeological evidence indicate there were tight connections between Rome and other parts of its domain built through trade, military campaigns, new roads and slavery — and the genetic history corroborates but also complicates the story. There was a massive shift in Roman residents’ ancestry, the researchers found, but that ancestry came primarily from the Eastern Mediterranean and Near East, possibly because of denser populations there relative to the Roman Empire’s western reaches in Europe and Africa.

The next several centuries were full of turmoil: the empire split in two, diseases decimated Rome’s population and a series of invasions befell the city. Those events left a mark on the city’s population, which shifted toward western European ancestry

As Rome declined, the newcomers bailed out in large numbers, leaving behind enough to transform the former Romans into what today is the Southern European mix, with a fair amount of Asian, North African, and Semitic in the blend.

This happened after the “massive shift” in ancestry imported Asiatic and Mediterranean peoples, transforming Rome from its white origins to a mixed-ethnic and mixed-race group, at which point “Roman culture” became an oxymoron.

Instead, Rome had “external culture,” or systems, procedures, rules, methods, principles, and bureaucracy that enforced a certain way of behaving. As always with obedience, people obeyed… but then counteracted, re-interpreting these rules according to their cultural standards.

This caused a lack of unity which obedience could not counteract, and so the institutions which made up Rome began to crumble, as did a sense of faith or shared culture. This created the weakness of leadership which made Rome ready to fall.

If we look at our own society, we can see where we are on this arc. We have imported the world, but now figured out that doing so is destructive, and so are re-consolidating around our original group. This means that many of the newcomers will leave, but not all, leaving behind a non-white replacement population.