Growth Of The Entitlement State Spreads Leftism Like A Cult 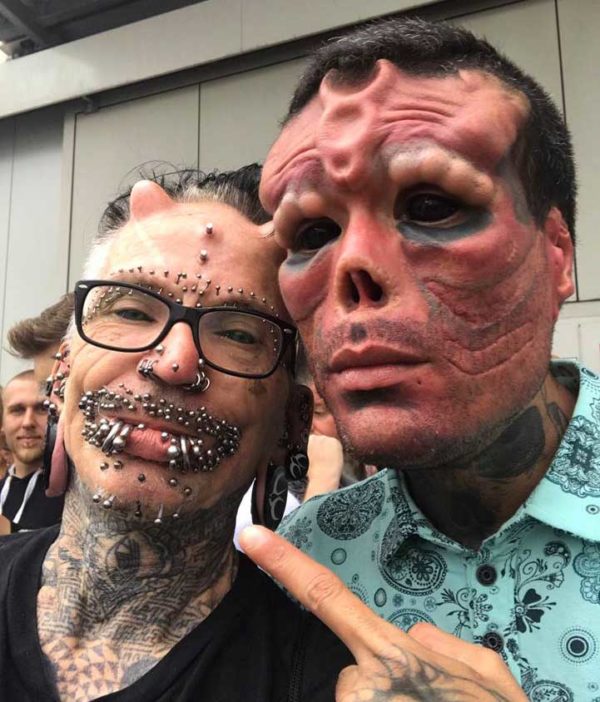 Many people are wondering what happened to their nice stable nations, and why the people they knew growing up have been replaced by herds of angry and violent Leftists. The short answer is that government grew these people.

First, it adopted an explicitly socialist worldview — welfare, diversity, equality, entitlements — and used this to raise people who expected that the only way to fix a problem was to have government dump money on it and imprison anyone who dissented.

Next, government encouraged a change in immigration patterns, so that many people are ethnic and racial hybrids, therefore are upset that they do not have a heritage and outraged at anyone who does. This began in 1965 across the West.

Finally, these kids went to schools run by government, which somehow the voters somnambulated their way into rationalizing as a good thing. Free school meant free daycare so Mom could work and the household could have two incomes, which was great because thanks to immigration and sexual liberation, there was too much labor and so no one got paid very much.

But what really did it was the growth of the entitlement state. We shifted from a naturalistic view of civilization, in which government was there to protect an organic civilization, to an entirely artificial and socialist one, where government is the civilization and is expected to provide for its citizens.

As Matt Briggs relates, the growth of entitlements — payments directly to citizens — is the biggest story of the past century, and shows why government is rearing a crop of alienated but Left-leaning people: 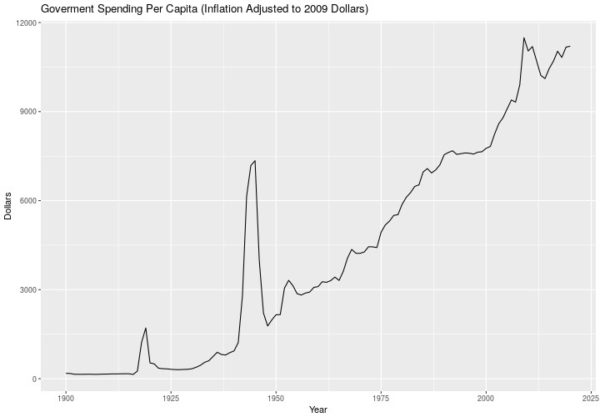 Stream: The Most Depressing (Government) Graph

…If the federal government were as small as it was in 1900, it would today spend the same $180 per citizen as it did then. Given population growth, this would imply a current budget of around $59 billion. The actual budget is $3.6 trillion, which is sixty times higher. Customs duties alone would have paid for a good chunk of the $59 billion. And there would have been no need of an income tax.

You might say, â€œIt doesnâ€™t matter what the government spends as long as it keeps pace with economy as measured by the Gross Domestic Product.â€ Yet the government spent at the rate of 3% of the GDP in 1900, soaring to 21% now. The shape of that curve is not much different than the spending per capita picture.

This is what a gradual transition to socialism looks like, and the same is true of Europe. Starting in the 1930s, when political uncertainty caused economic disasters, governments began to get everyone on the dole in some way or another. If that looks like a bribe, perhaps there is some truth to it. Citizens dependent on government tend to be more compliant and less prone to revolution.

With this transition comes a change of outlook. People no longer want to foster situations where good things can happen, but insisted on standardizing all things through force of government, which requires adopting a universal standard for all people. That in turn requires obliterating differences between us and turning us into a grey, casteless, raceless, atheistic and cultureless mass culture.

This universalism explains the new intolerance of the Left. When someone believes in one right way for everyone to do everything, then any failure to comply with that should be punished. When government is the source of all good things, those who go against the official ideology are enemies not just of the state, but of the people, and must be destroyed.

As we leave The Age of Ideology behind, that type of outlook will increasingly find itself in decline and disfavor. But if we want to see its roots, we can see them in exactly what our founding fathers feared: the rise of government as a cause in itself, and the corresponding production of an angry mob who will strike down any who do not conform to the plan.

This mob behaves like a cult, gang or terrorist organization, and it is gaining in prominence because Leftist policies are failing, which provokes a defensive reaction against all non-Leftist thought:

We would hang out at an anarchist library in Sydney. Here a bunch of people on the dole gather enough money to rent out the space and run a bookshop. Itâ€™s like extremist networking.

I came to believe that war was a symptom of bigger systems at play in society and they were the real enemy, like white supremacy and patriarchy. Antifa believe these systems need to be smashed through a process of â€˜de-platformingâ€™ to save the world. People who donâ€™t necessarily agree on everything are united to attack their common enemy â€” anyone in the right wing of politics.

…They believe historically their roots were fighting Nazi oppression. They run a website which is updated every couple of weeks with a hit list of right wing names. They believe if these people are allowed to speak, society will suffer. So, they must be pushed back.

Leftism, or the philosophy born from egalitarianism, requires that equality be the most important goal of every person. Those who are not Leftist are increasingly finding that they cannot huddle in the center, mainly because one is either an egalitarian or not an egalitarian, which means anyone who does not see equality as the goal of civilization. Thus all non-Leftists are Rightists to the cultist.

The rise in Rightism worldwide, triggered by dissatisfaction with the globalism and diversity programs that were transforming our nations, provoked the rise of this radical Leftist cult, essentially causing ordinary Leftists to fear the failure of their ideals, and as a result radicalizing and mobilizing to counteract what they view as a threat to their self-esteem:

Dr Troy Whitford, a lecturer in Australian history and politics at Charles Sturt University, says Antifa members tend to be disaffected male university students. Many have joined the cause in recent years to counter far-right groups, such as the United Patriots Front (UPF). “Whenever you see a rise in radical nationalism, you see a rise in counter groups as well,” he says.

…”Look at some of the demonstrations between Reclaim Australia and anti-fascists, and you actually find anti-fascists are the ones throwing the first punch,” he says.

…Antifa members adopt the term “no platform” when confronting far-right groups â€“ meaning that their aim is to shut down entirely their rallies, protests and propaganda.

Those who want to entirely block out something else either fear it, want to eject it from their society, or want to escape it as a negative stimulus. For most, it is enough to be able to avoid it, and so they reject it in public. Antifa, on the other hand, want to blot it out entirely whenever expressed anywhere, which is what “no platform” means.

Someone who has dedicated his entire life to a system and depends on thinking that this system is good in order to feel good about his place in the world, when confronted with doubt, must either accept that his past actions were broken or will have to rationalize his behavior, meaning that he must argue backward and find some way to explain to himself that what exists is good, especially if he thinks it is not.

Kids who have grown up under the entitlement state, received its propaganda through education, and now depend on it for hopeful future employment or social benefits will tend to rationalize and then strike out against any who point out that the emperor has no clothes. Those who interrupt the vision of our society as good must be destroyed, in the views of these indoctrinated children.

This pathology also corrupted conservatives. As Leftism won time and again, and especially pushed the culture war to its conclusion, the average conservative simply rationalized what was happening as good and so accepted the Leftist goals and methods, eventually becoming a de facto Leftist himself. This led to years of defeat as conservatives compromised principles and were circumnavigated time and again.

Leftism grows when government supports it and in the West, by adopting the entitlement and social welfare programs of the socialists, we have created an incubator for future Leftists who fear any alternative way of life to the one they have known. They lash out in hatred and fear, and by doing so, create the conditions for separation of Right and Left into separate societies.

Clintons Self-Destruct In Glorious Corruption Scandal | The Romance of Decay