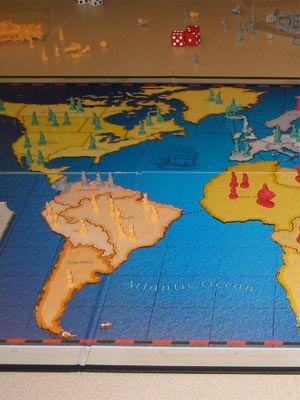 As mentioned in a previous post, globalism is an extension of liberalism, and since 1789 it has been re-making the world in its own image.

Globalism is a method by which individuals unite into a crowd to demand no oversight, no social hierarchy, no shared values and no requirements for interacting with civilization except the bare minimum (job, rent, don’t murder). It’s an empire of selfishness made of the fears of many individuals whipped into a mob.

When analyzing globalism, it is important to be wary of what it says it is versus what it is. It says it is a movement for the equality of all people everywhere, and that is true, but it wants that equality so that no other system of power can exist.

Globalism is the ultimate evolution of control because it bases its power on the absence of leadership and ideology, not on a particular leader or ideology. It is controlled anarchy: we all agree we should be equal, and after that every other decision is made by convenience.

In other words, globalism is a contradiction that hoodwinks us because it is schizophrenic. It says one thing on the surface, but that thing is the cause to an effect, which is the actual goal. In this case, individual equality creates a chaotic society that then demands strong leaders.

It also demands strong social, as opposed to values-based, cultural codes. It is no longer about agreed-upon values as in “What should our legacy to history be?” but the type of kindergarten-teacher logic that asks “How do we all get along?”

There is no goal. The only possible direction is more equality. Except that, like all social reasoning, this surface attribute creates unintended consequences in its wake.

A recent Vatican estimate suggests that 100,000 Copts may have fled the country since Mubarakâ€™s fall. If Egyptâ€™s Muslim Brotherhood consolidates political power, that figure could grow exponentially.

This is a familiar story in the Middle East, where any sort of popular sovereignty has tended to unleash the furies and drive minorities into exile. From Lebanon to North Africa, the Arab worldâ€™s Christian enclaves have been shrinking steadily since decolonization. More than half of Iraqâ€™s 1.5 million Christians have fled the country since the American invasion toppled Saddam Hussein.

More important, though, this is a familiar story for the modern world as a whole â€” a case of what National Reviewâ€™s John Derbyshire calls â€œmodernity versus diversity.â€ For all the bright talk about multicultural mosaics, the age of globalization has also been an age of unprecedented religious and racial sorting â€” sometimes by choice, more often at gunpoint. – The New York Times

Democracy destroys diversity, but not in the way the article above suggests. Democracy insists on a single compromise which is acceptable to everyone, and thus forces a settling on the lowest common denominator.

In the middle east, right now, that’s Islam and free AK-47 ammo for everyone. In another two years, it will be Coca-Cola, strip clubs, fast food and cable TV. The people will grow just as fat and bloated as Americans. That was always the plan: neutralize the opposition by exporting our own disease.

The goal of globalism has always been to enforce uniformity through conformity. It hopes to achieve this by wrecking any idea or thing that makes one place separate from another. Culture, religion, language, heritage, social class, hereditary roles, customs, values… they all must die. For equality!

In fact, the notion of equality itself is toxic because it creates an inherent enmity between people and their society, and individuals against individuals. Society can never make us physically equal, including equal abilities which are the consequence of mental wiring. Thus we say one thing, mean another, and create from the tension between the two a state of constant internal warfare.

Todayâ€™s mixing of peoples, cultures and ideologies, whether resulting from world trade and immigration or improved communication and social fission, is moving our world closer in important ways to the one Ibn Khaldun knew than the more cohesive one with which we have long been familiar. Such changes will affect our politics profoundly in ways his writings can illuminate for us.

If there are no strong overarching loyalties, mixing of populations causes men to lose the social cohesion required for the self-rule of a free society and to withdraw into small groups in which they can maintain a coherent and predictable way of life. Common loyalties firm enough to create the civic order of Western Europe needed time and stability to evolve. It took 40 kings to make France, and no less time to grow what Burke once called the British oak; in the parts of Europe subject to invasion from Asia or North Africa nothing similar arose.

The gifts of the past may not be ours forever. Common loyalties make a people, and the common culture and history that support a peopleâ€™s identity are needed to make loyalties endure. Success in transplanting a British society to America and absorbing European immigrants into it is no sign that the American civic order will survive abandonment of a common or at least dominant identity; a social setting like the one Ibn Khaldun knew will be a more likely consequence. Immigration and the end of national boundaries could bring about similar results within the European Union by replacing ordered diversity with bureaucratically- administered chaos. – Turnabout: thoughts in and out of season

The point here is made succinctly — you have two choices of society:

In other words, nationalism is not about disliking x religious, political, ethnic, racial or social group — it’s about wanting to have an identity of one’s own so that society is held together by something other than a police state/Nanny State.

When we give up on that ideal, we follow many other empires into slow but inevitable decline.

It really doesn’t matter what race you are or what your national identity is. What matters is the cultural adaption immigrants make once they arrive. In America in the 21st century, we make it far too easy for immigrants not to assimilate, taking on the values and language of what has been a common and uniquely American culture for most of our history.

He also rightly points out that the America of tomorrow, demographically speaking, will closely resemble today’s California. Having lived in California for 25 years before fleeing, I can tell you that is a very scary thought.

California is a basket case. There the population has figured out that they can vote themselves benefits and sustenance and all kinds of goodies without any personal consequences â€“ because only a tiny minority of Californians, as well as other Americans, are responsible for picking up the costs.

Can you imagine what America will be like when its demographics more closely resemble today’s California? – World News Daily

Globalism loves diversity because diversity shatters national culture and ensures that we need a strong nanny/police state to rule over us. It would be best if it were international, because that way all people would be equal and uniform, and there would be no barriers to commerce (McDonald’s) and the nanny state.

We have a choice about our future every second of our lives. The same is true of our civilization; we can choose the nanny state or the organic society. But are enough people still intellectually awake enough to tell the difference?