Floyd Race Riots Teach Us About Our Elites 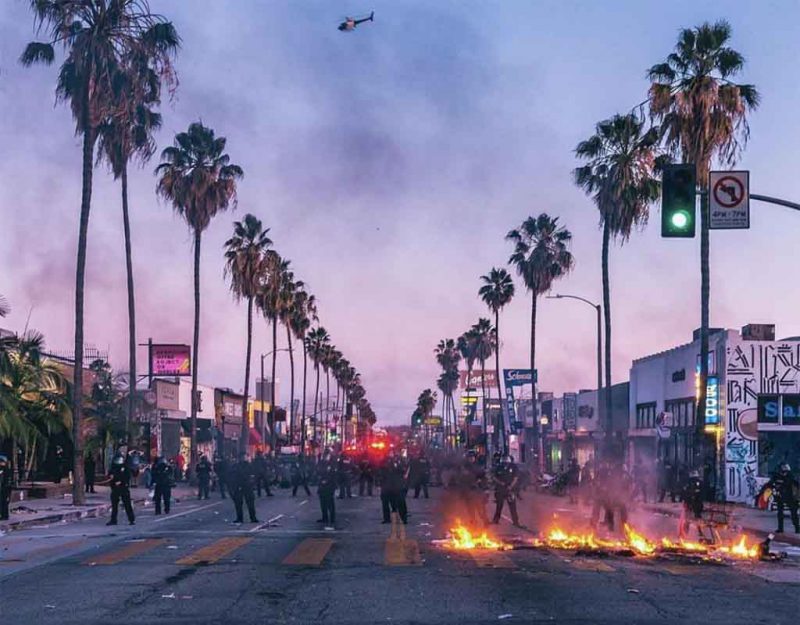 There once was this really competitive, high-pressure, intense sport that most American high schools attempted to field a competitive team for. It didn’t require the stamina of actual, real, non-Bermuda shorts joggers. It didn’t make you just about kill yourself on the leg press or the incline bench. You never had to run those God-accursed 200 push-up “Suicides” and then do laps around the school athletic compound if you didn’t run them fast enough while puking your cafeteria pizza all over your shirt.

However, this activity conferred great status. It required nerves of steel. It took a certain coordination and visual acuity. You had to get the breathing and the posture just right. It was competitive rifle-shooting, and an awful lot of places wish their schools still had the Good Old Weapons Coach instead of the Good Old Ball Coach right about…now!

America had not degenerated into Amerika quite yet when rifle-shooting was a competitive varsity sport. People were expected to grow up and safely handle the tools of an adult. They were even expected to handle the rather dangerous ones with both proficiency and discretion. They were therefore both trusted with and expected to have them handy upon occasions when those tools would, in fact, come in handy. It maybe doesn’t even have to come in handy when the joggers aren’t quite sure which guys along the trail could take down a pigeon on the wing at a hundred fifty feet.

Now that Amerika is Clown-World, Amerikans can no longer see off the enemy at the gates. We therefore warn them to wear their Covid masks and Socially Distance while out rampaging. Heck, as long as someone else’s property gets smashed, Professional ESPN Knee-Grows such as Chris Palmer cheer it on, from their very own humble abodes in Beverly Hills.

When it happened in Minnesota a few days ago, he got his Thuglife on and tweeted “Burn All That stuff down.” What a man. Get ’em, Malcolm X! Then the Knee-Grows came over to his place for dinner. He wasn’t quite as down with the struggle when the collateral damage started chumming his own swimming pool. He very quickly found himself pinning for the days when LA County High Schools all had competitive rifle shooting and about half of his neighbors were well armed.

However, as the rioters started trashing Beverly Hills in the night between May 30 and May 31, Palmer went on an epic NIMBY rant, assuring the rioters that he’s totally with their cause, provided they keep their act out of his neighborhood. He warns them that the Beverly Hills Police are the right kind of jerks, who protect him. Further, despite Beverly Hills being one of America’s most ostentatiously rich communities, he insists that it’s “not where the fight is.”

While maybe Chris Palmer won’t quite come around to Tommy Sotomayor’s views on this subject, one would hope he learned a thing or three. He apparently hasn’t.

His social media profile the day after his Twitter rant about looting was a business decision on his part. He had to avoid being replaced by a different obnoxious microphone chimp with a more woke perspective on things. He assures us that it’s just violence and looting that he doesn’t like. He didn’t know the place in Minneapolis that went up like a pep-rally bonfire was public Housing. When you “burn that stuff down” in Chris Palmer World, you gotta do it for love, man.

People forget a lot of the reasons we didn’t have these riots before the 1960s. They weren’t tolerated. Rioters knew they had a non-zero chance of getting cold and dead. They knew that their families would spend a good decade or longer apologizing for ever having produced them. They knew their children would have it twice as hard as the kids of people who didn’t go around behaving like Murder Hornets on Crank. Reputation meant something and a rancid reputation took more than one bath or shower to wipe off. The Social Distancing went on for more than just the length of one pandemic.

Now all of that is gone. It doesn’t cost jack to jack somebodies stuff. You can claim to be a jogger, bird-watcher, or non-violent protestor for righteousness that just happened across those Molotov Cocktails and stacks of bricks. And that merchandise from Target? That was the darndest thing! It just flew out of a window and stuck to them. You wouldn’t expect them to risk taking it back inside amidst a violent riot. At least that’s what Wolf Blitzer would tell us.

Until Wolf gets told to put something in his mouth other than his Executive Producer, civilization is on lockdown in Amerika. We can’t have normal, law-abiding people out there interfering with all the bird-watchers and joggers. That might be White Privilege or something. And it certainly was a White Privilege when White People tried out every year for The Varsity Rifle Team.

This is because there is no such thing as a right under the dominion of a state. This is regardless of the type of government. A state has to maintain a coercive monopoly to remain a state. Lying about inalienable rights may be good politics if your proposed constitution is about to go down in flames. Actually offering anything more than a privilege that is null and void at the whims of the societal leadership offers estoppel against the necessary coercive monopoly.

Therefore, an overempowered state like Modern Amerika cannot really allow you to have certain inalienable rights. That’s why the really smart people who run that Modern Amerika are not particularly big boosters of skilled and competitive Varsity Shooting Teams. They’d much rather ban the guns than the Knee-Grows. The Knee-Grows always take the short-term incentivization and are easily controlled. A citizen that can shoot to kill at 100 Meters is far more likely to retain self-mastery regardless the whims of a debased and amoral government.

Eventually, a fairly significant mass of the people will realize that and teach their offspring enough about combat to survive the neighbors. Until then, frightened little men like ESPN’s Chris Palmer will encourage the idiot mob to “burn that stuff down.” Praying to whatever queerness they worship that it stays someone else’s stuff burning in a far away state. Chris Palmer is the elite that every democracy eventually produces.