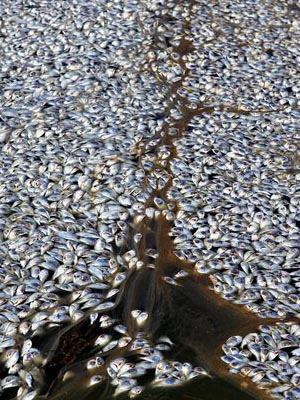 Nature provides for us examples — “metaphors,” even — of informationally-similar events and their outcomes, which enables us to see how our own actions will turn out.

Economics, or the study of the flow of resources, provides the most fertile ground for comparison. Take for example an analysis of large government, which conservatives oppose.

Large government creates opportunities that do not exist in reality. It does this through regulation, which creates needs that did not previously exist (like car inspections) and through hiring people to serve in its ranks, which can create a new class of workers.

But it has consequences. When we fertilize our fields, and rain carries the fertilizer into streams, it creates a rush of nutrients that results in a bloom of algae. This in turn absorbs oxygen that fish need, suffocating many of them. In addition, our big nuclear and manufacturing plants can generate huge outflows of warm water, which support species that normally do not exist in the area, and cause them to reproduce rapidly, choking out native species. The result in both cases is a fishkill, or the death of thousands or millions of local fish at once.

When conservatives criticize large government, they are attacking it on several levels. First of course is its tendency to be ineffective at high cost; that’s the primary problem. The secondary problem is that big government creates the equivalent of a fishkill in our economy and society.

The Federal Government is our nation’s largest employer, hiring over 2 million people at an average salary of $74,403 per year each 1. One analysis found that state and federal workers earned 35 percent higher wages and 65 percent higher benefits than private-sector employees 2. Another survey found that federal workers earned double what their private-sector counterparts did 3. Another report showed that the number of government workers earning $150,000 or more has surged tenfold in the past five years, doubling under Obama 4.

We should also look at opportunities government creates with regulation. 59.2% of tax forms were filed by paid preparers in 20075. The government estimates we spend 2-5% of our GDP on tax preparation expenses, including paid preparers 6. Every government-required regulation or statute generates some form of cost, and many of them are quite high. The mention of car inspection is a mild one — about $50 per year — but think of every area which government regulates. Each regulation means more bureaucrats, more rules, and more paid preparers and experts on the outside, from immigration lawyers to diversity consultants and disability-compliant web design. All of that cost is ultimately passed on to you.

This is not to say that we as a society should not address these issues. We should in many cases. However, government is perhaps the least efficient tool. Its employees have no incentive to perform and are virtually un-fireable, so results are poor.

Even worse is that it creates these weird pockets of sudden wealth. The normal middle class is squeezed out and replaced with opportunists, professional bureaucrats, carpetbaggers and parasites. This is the economic equivalent of fishkill, and like the real thing it is miserable and leaves a massive stench.