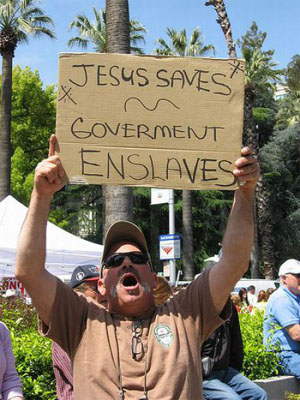 We suffer from information overload. The result is a total lack of clarity, since we receive so many impressions per idea that they lump together into a hazy definition.

Since we do not get a clear statement of what any thing is, we tend to view it backward, from instance to essence. That means that instead of trying to figure out what the philosophy of conservatism is, we look at the most obvious example (Republicans) and try to back-track a definition from that.

In an investigation of the meaning of the term “conservative,” the first fact to strike is that it is of recent vintage. Until the gradual increase in liberal revolutions starting before The Enlightenment, peaking in 1789 and extending to central Europe in 1848, there was no need for a word for conservatism.

Society at that time was what we might call unitive or integral. All of its vital ideas and organs were based on synchronicity or at least harmony with natural order, instead of today’s facilitative (commercial) and adversarial (competitive) systems, which are based on human order.

Its basic organization scheme was derived from nature and/or religion in the form of natural law. While Darwinism was unknown as a formulation, the principle of it was not; nature was recognized as a hierarchy based on individual animals and people trying to fulfill a function defined by their position.

For example, societies had caste systems, which were essentially intelligence-based rankings, and each person saw their goal in life as a matter of fulfilling a set framework made of shared values, calendar, language, philosophy/religion and social role. “Individualism” in the modern sense was missing, but by abstracting out so much of their personalities, people in traditional societies may have been more individualistic in that they had more free time and more expression of self by their interpretation of role.

Liberalism came about as a result of the success of these civilizations, and it would doom them. When these societies became prosperous, they grew from the bottom. The people who most needed the protection of a civilization were under its enhanced nutrition, safety and hygiene able to breed more. As a result, mass movements arose whose goal was simple: take power.

They did so by arguing a reversal to the natural order doctrine. While the natural law types saw humanity’s goal as fitting into the order of nature, the new “liberals” saw human individuals as the most important and nature as something to be subjugated by them, for the purpose of as few restrictions as possible on individual whims, desires, judgments and appetites.

We know the rest: liberalism took over during the Enlightenment, it dominated the church and eventually took power in France, resulting in mass killings and throwing Europe into two centuries of warfare. You will not hear much about that in the media because it is an unpopular truth.

Liberalism is eternally popular. It imposes almost no requirements on the individual. In exchange for loyalty, it promises absolute “freedom,” which is a word without a coherent definition. It makes excuses for the failures of individuals, telling them in effect that a lack of freedom caused their problems, not individual errors or lack of impulse control.

Conservatism may not exist in the modern time. This is a liberal age and its underpinnings and our daily basic assumptions about what is good and what is bad are based in liberalism.

Further, liberalism demonizes all conservatism and portrays it as fascist, evil, stupid, ignorant and hateful. Conservative values are unacceptable to liberals and so long as they exist anywhere on earth, the liberal faithful will be marshaled to make war upon them.

We moderns can be forgiven for not understanding conservatism. Every single thing we hear, read or see every day is calculated to bash true conservatism into oblivion, even to the point where our “conservatives” are fake.

However what we cannot do is avoid culpability on the basis of a failure to understand conservatism. We know modernity is a disaster; we cannot afford to ignore our sole option to modernity and the vast ecological, cultural, genetic and social destruction that it has wrought upon us.

While it will never be as popular as liberalism, conservatism eternally recurs for the same reasons it was the original order of humankind: it not only works better than liberalism, but because it bonds us to our world instead of making us adversaries, it heals our souls and makes life beautiful again.

As the veneer of civility and Utopian progress that has drugged us for centuries starts to fade, people are seeking an alternative. At some vital tipping point, objectivity will become more important than subjective popularity, and what we know as conservatism now will again become the default order of humankind.