Colin Kaepernick Shows Us The Future Of America 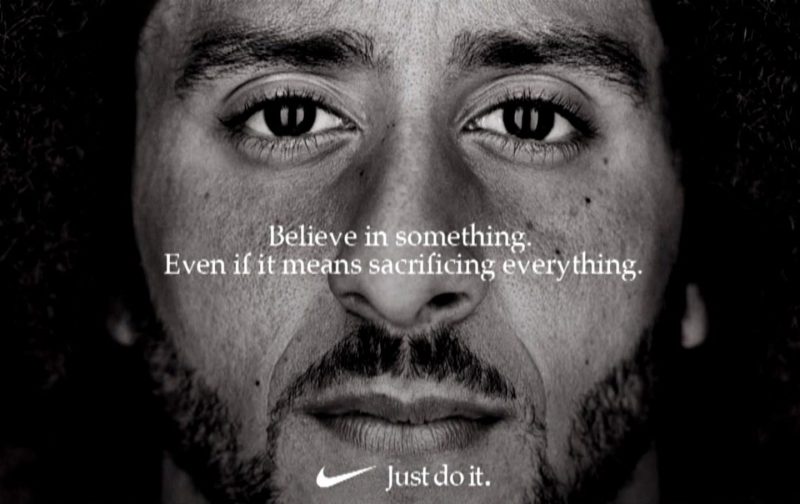 Conservative news media drives itself through outrage, mainly because when you have no power all you can do is react, and the latest outrage comes to us from Nike, which as a dubious mega-corporation has a duty to draw attention to itself at all times with shocking acts.

Its latest provocation consists of hiring Colin Kaepernick, the “take a knee” guy from the NFL, as the face of its new ad campaign. The markets reacted badly, but this is Day One, so even that $3bn loss may be merely the result of speculation and probably has no lasting impact.

Even more, the Right-wingers burning their Nike gear and the colleges canceling their contracts are missing the point: Nike has, like the Democrat party before it, shifted audiences. Like the reaction of the markets, this will have a different long-term effect than its short-term effect.

We can find out why the Kaepernick Caper began through what large corporations do best, which is that like Bill Clinton they consult their excel spreadsheets to see what is popular in order to determine what their own opinions are. They found a chance to shift teams to a new constituency:

[I]ts market research was clear — the race, age and political views of most Nike customers are in sync with the new ad campaign.

Caucasians are under-represented in the Nike world. The white population in the U.S. is 75% — but they comprise only 67% of Nike’s customers. And, of those, Nike believes a very large percentage, especially young whites, support Colin.

Most conservatives, looking at this, would point out that 67% of your customer base is still a majority, and therefore it does not make sense to offend them. However, Nike has seen for years that the white middle class will never abandon its sports, beer, movies, and luxury automobiles.

Even more, Nike can count on young men to be inexperienced and therefore not concerned with heady stuff like politics. To them, life is a product on a shelf, just waiting to be taken, and what matters is what they, the shopper, want to do with their money, not any consequences of that action.

To such people, Nike is making an “edgy” pitch. Instead of identifying with their boring old parents, these young rebels can join the resistance to all the things they fear about their own imminent adulthood, like being forced into boring cubicle jobs so they can serve as tax cash cows to fund the growing non-white underclass.

The executives at Nike must be laughing at the conservative outrage, burning of shoes, and other pointless behavior. It will not change a thing. If anything, it will cement the “edgy” nature of the Nike campaign, and they can keep selling it to thoughtless people. This will be true in the short term, at least, but then a surprise awaits. More on that later.

Nike walks in good company on its new quest. Fifty-three years ago, the Democrats decided to use the same strategy, both becoming “edgy” to the rising teenage bourgeois audience, and importing a new group of voters so that the Left would have a permanent majority:

In a 1998 article for Cornell University’s Roper Center for Public Opinion Research, Democratic political consultant Patrick Reddy exulted that the 1965 immigration act was “the Kennedy family’s greatest gift to the Democratic Party.” Changing the country’s demographics through immigration would be “George McGovern’s revenge,” liberal political strategist Ruy Teixeira announced 16 years ago — and then celebrated as a fait accompli upon Obama’s election in 2008.

…You’re Hitler if you support Teddy Kennedy’s original claims about his 1965 immigration bill. At the time, he and his co-conspirators swore up and down that it would not alter the country’s ethnic composition one iota. Now, it’s “white supremacist” to say: “We liked our country the way it was.”

Has anyone ever criticized a black, brown, beige, yellow, red or green nation for wanting to preserve its ethnicity? No, only a white majority is pure evil that must be extirpated.

When your audience does not do what you want them to, you can force their hand by bringing in a brand new constituency. These will support you because their interest is in conquering the majority, since a minority group has no real power and is always in danger until it conquers that majority.

Above I mentioned that what Nike has done will have different long-term effects than short-term ones. The same is true of what is happening to Democrats. With the rise of candidates like Alexandria Ocasio-Cortez, Andrew Gillum, and Ayanna Pressley, the Left has been taken over by its own pets.

Ayanna Pressley and New York’s Alexandria Ocasio-Cortez, two women of color, both defeated Democratic incumbent congressmen in their primaries. The progressive movement has helped nominate three black Democrats for governor’s seats, including a clear upset in Florida, where Tallahassee Mayor Andrew Gillum knocked off establishment favorite Gwen Graham. Graham’s establishment credentials could not have been stronger. Her father, Bob, is a Florida icon who served as governor and U.S. senator.

The Democrats are losing their favorites to a new rising tide of color. These new voters are less concerned with being too Socialist and more concerned with staking out ground. They know that any area they dominate will quickly become minority-majority, both through white flight and inbound Hispanic and Asian immigration.

Across America, minorities are joining against the majority. We even see cases where minority groups are joining hands to remove power from whites:

“We will no longer be complicit with a policy that intentionally inflicts misery on a vulnerable population without giving any thought to the fallout,” Lance Bottoms said. “As the birthplace of the civil rights movement, we are called to be better than this.”

If we accept the argument of the assimilationists, Hispanics and blacks will not work together against a white society because they are economically dependent on it. In particular, Hispanics and blacks compete, so they have traditionally been wary of each other and often engaged in open ethnic warfare.

And yet here they are working together because by doing so, they can displace their main competition and dominate America. They can kick out those old white Democrats, along with the rest of the white people, and then battle it out among themselves.

I think they will encounter surprises. Hispanics will displace blacks — higher reproduction rate — who will in turn be displaced or outright invaded by Asians, who not only have high reproduction rates but more organization and work ethic than the Amerinds.

We are already seeing the dethroning of white Democrats because they are simply not relevant to the new audience they have created:

Capuano, who is white, also got wide support from the African-American Democratic establishment. Black Massachusetts Democrats reportedly urged Pressley, who is black, not to run, while civil rights icon Rep. John Lewis (D-Ga.) held an event for Capuano earlier this year. But Pressley stomped Capuano nonetheless, largely on the strength of huge black turnout.

So what happened here? It seems fair to conclude that the opinion of the Democratic establishment — black, white, or otherwise — is carrying increasingly little weight with voters. Of course, establishment-backed Democrats are still winning elections. But voters are less and less convinced of elite wisdom. Lawmakers who have wandered the halls of power for two decades are viewed with skepticism. Candidates who are simply different — particularly when it comes to younger minority women taking on old white guys — seem worth a shot. Thus Pressley’s slogan: “Change Can’t Wait.”

As the old saying goes, blood is thicker than water. People are going to vote for their own tribe, or at least in the interests of their tribe. As we are fond of saying around here, every group acts in its own self-interest alone. They do what benefits them. Loyalty to party, economic system, or even country are distant if considered at all.

They may also not be competent. Nothing suggests that Democrats are, much less these new radicals. They will like any incompetent parasite take over the host, kill it, and then starve, much like happened in Zimbabwe, Cuba, Russia, Cambodia, Venezuela, and too many more places to count.

When they fail, in will come warlike foreigners — most likely the Chinese — who will take over and make slaves of them, at which point The Resistance can start up again. It may not have long to fight, because the Chinese themselves are unstable.

No, Western Man, if there is any future for humanity, you must make it happen yourself. No one else can do it. Kapernick is the face of Nike because Nike, like the Democrats, has bet on your doom. Most of your government has done the same, with Republicans just hoping for a final payout before fleeing to Switzerland.

We have lived too long in a state of constantly reacting to what the Left is doing. They want to destroy us; in the process, they are destroying themselves and what is left of the nation-state of America. We cannot merely resist. We have to displace them, deport them, and go our own way, or they will end us, and we know that because they have told us so.