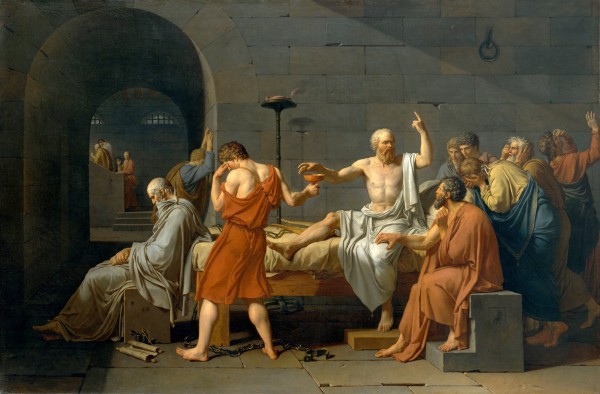 Imagine that a path in the woods suddenly branches. The original path goes straight; another path, a tangent, moves off into a different direction. On that tributary someone has erected a sign that says DEATH AHEAD.

Assuming that you could not quietly sneak off the path and walk parallel to it in the woods to see exactly what doom lies at its end, and that you had to take two paths, the situation becomes clearer. Go straight, or die.

However those in your group are complaining about the straight path. It hurts their feet; sometimes, it has led them to places to set up camp that have been disastrous; it seems unfair how someone always has to work at the edges. They argue that the DEATH AHEAD path is in fact, life ahead. Less pain, more gain.

We are in this situation now, as we have been for a thousand years. The DEATH AHEAD path finds greater popularity than the straight ‘n’ narrow, and yet history shows us that it is indeed as the sign has labeled it. To do so, requires looking at a high-level view of civilization itself.

In ancient Athens, people became afraid of the example set by the Spartans of a militaristic society. The Athenians went the opposite way and embraced democracy and free expression of the individual instead. At first, this seemed to work. Then it became unstable, and they found themselves executing dissidents as well as one of the most important philosophers of all time, namely Socrates. Some time after that they passed into history. Today, Greeks are essentially ethnic Turks mixed with random elements of people the Athenians once easily conquered. FAIL.

In 1789 in France, a Revolution occurred. It was followed by years of show trials and mass executions of men, women and children. Eventually, the Revolutionaries turned on each other. At some point, order was restored by starting external wars — fighting for democracy, of course — which then consumed the budget and the nation. The people were poorer and less happy than before. Shortly after that, France dropped from superpower status to being known as a land of rifle-droppers. FAIL.

Just a little over a century later, in Russia, another Revolution happened. The people overthrew their leaders, and there was great celebration, followed by executions. And then, more executions. Change of power, then even more executions. Gulags for thousands, and almost everyone lived in dire poverty far worse than what they had experienced before. Eventually, after spreading nuclear waste across a continent, their system collapsed and now they are ruled by gangsters, known for their prostitutes, and are essentially a third-world nation. FAIL.

There is a pattern here.

As your grandmother probably told you, it is far easier to identify what you do not like than what you desire in its place. This is why everyone complains, and one out of a hundred has a constructive idea and works on it. This is not just the nature of humanity; the same pattern can be seen in our ape and monkey relatives, where most of them throw poo and shriek but only a few will act. Revolutions represent the triumph of the complainer. Unhappy people, who are always unhappy no matter what situation, find a sense of warmth and validation in being with other unhappy people. They find a scapegoat to blame, and then take over. They must then kill what they have blamed. At that point, they have nothing to hold them together, and third-world style dictator-and-warlord style government takes hold.

Let us review the steps of a People’s Revolution:

If you could craft a disease to destroy a society, it would be hard to do better than that. And yet they will tell you that they are free, and more individual than ever, with this new revolution. The old way made them feel like cogs; in the new way, they are individualists. They get nervous if you point out that this individualism is granted by others, and only exists when observed by others, so it is not really individualism and has come to suspiciously resemble a group-hug… but that will merely upset them if you tell them.

Our path lies not ahead of us but to the side. We have taken the DEATH AHEAD path, with the help of a Constitution in the US and strong culture in the EU to save us from its extremes, but as it turns out, those extremes cannot be avoided. Even with the millions of rules and dozens of wars we have fought, democracy is death. Always. And forever. Thus the choice is upon us: keep walking toward death, or get a [expletive(s) deleted] clue and turn around back to the straight ‘n’ narrow.

On capitalism | The necessity of paranoia