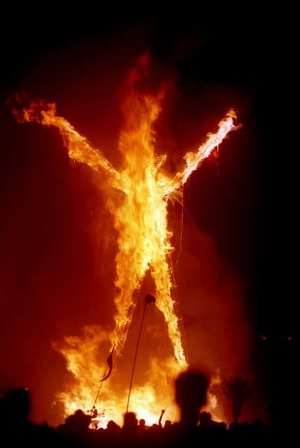 Man has celebrated the Solstices and the Equinoxes from time immemorial.Â  In America we still do this.Â  The Autumnal Equinox has essentially become Halloween, the Winter Solstice has become Christmas, the Vernal Equinox, Easter.Â  Curiously, the Summer Solstice does not appear to have a corresponding holiday in America.Â  In Europe, however, especially in the north, Midsummer is still celebrated.Â  Its primary ritual is the bonfire.

How interesting that the notorious art festival, Burning Man, now held in the Nevada desert, was originally a small bonfire ritual, amongst friends, to celebrate the Summer Solstice.Â  Its beginnings are charming and innocent enough.Â  But what was originally 20 friends celebrating the Solstice, is now a week long spectacle attended by 40,000+ and run by an LLC.

Burning Man is an â€œavant-gardeâ€ art festival based around radical self-expression and supposed self-reliance, but it also seems like a bizarre social experiment that flirts with madness.Â  Itâ€™s basically an X-rated amusement park, an excuse for debauchery and drug use.Â  Absolutely any one can, and does, attend.Â  Clothing is optional even though children of all ages are welcome.Â  The â€œeconomyâ€ is based on barter and potlatch although coffee and ice is for sale from the LLC.Â  In its early stages, the festival had no rules, but as the number of attendees (known as â€œburnersâ€) grew, they quickly realized that they obviously needed rules.

Letâ€™s look at the time-line of Burning Man and take note of the â€œhighlights.â€

Is it only a matter of time until there are outright murders and rapes? Remember, when permissiveness reigns and standards are lax, the jackals start to show up.

This arson in 2007 is interesting.Â  The lunatic responsible for the arson is named Paul Addis.Â  It was done as a â€œprankâ€ on the night of a full Lunar eclipse.Â  Perhaps some people are controlled by the moon, the stars, the sun, and the passage of the seasons after all.Â  The irony and humor of being arrested for arson at Burning Man is simply sublime.

Apparently Addis was a well-known â€œburnerâ€ and it is claimed that, in light of his arrest, some of the usual participants did not attend the 2008 event in protest.Â  This gives you an idea of the kind of anarchists that show up at these kinds of things.Â  Other burners purportedly protested the 2008 event apparently in response to the â€œtheme,â€ which was â€œAmerican Dream.â€Â  Maybe it just wasnâ€™t cutting-edge enough for these revolutionary artistes.Â  And in 2007, the founders of Burning Man had a rift resulting in lawsuits. Â Things appear to be crumbling for Burning Man.

Speaking of the themes of Burning Man, the 2006 theme is especially interesting.Â  The theme was â€œHope and Fear.â€Â  Apparently, burners could cast a â€œhopefulâ€ or â€œfearfulâ€ vote according to their feelings about the future of mankind and the effigy was lowered or raised accordingly.Â  The future of Man?Â  Hey, letâ€™s put it to a vote!

As was said earlier, Burning Man is commerce-free except for coffee and ice.Â  Those proceeds go to charity, which is fine and admirabl 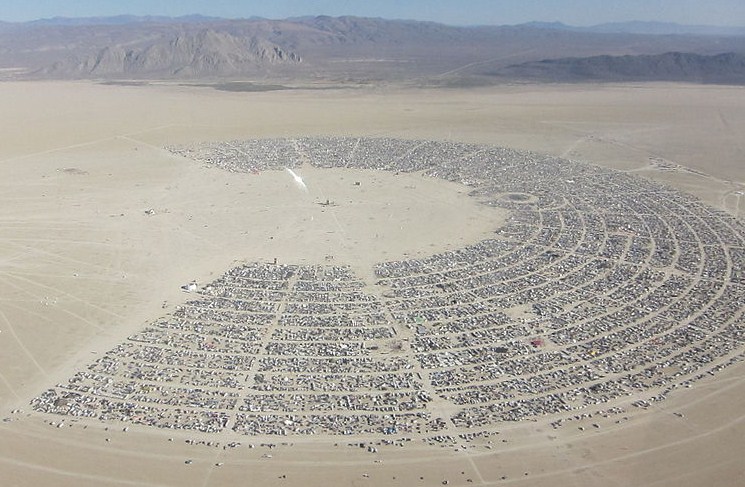 e, but the sublime irony and laughter continues.Â  The desert is only the most inhospitable landscape known to man, and the only thing you can exchange money for, at Burning Man, is ice.Â  Think about it:Â  selling iceâ€¦in the desert.Â  Is Burning Man some sort of test-run for extreme liberal communities in the distant future?Â Â  Look at the aerial view of Burning Man.Â  It looks like the civilizational ruins of an Alien race from another planet.

Speaking of ruins, the year 2000 was the inaugural year of the burning of the Temple.Â  Alongside the effigy of the Man, the Temple is one of the biggest constructs at the festival.Â  The Burning of the Temple has become a central activity at the event.Â  Trying to escape Godâ€™s judgment, are they?Â  Is it not curious how much creativity, time, and effort is put into these art pieces only so that they can ultimately be incinerated?Â  The Ancients built their sculpture and architecture to last for eternity.Â  Think of the Greek and Roman ruins.Â  The burners build their structures for the express purpose of destroying them, themselves.

Letâ€™s review:Â  basically, in 1996, as the â€œpopulationâ€ climbed to 8,000, more and more problems began to arise.Â  We see fatalities, injuries, the need for more rules and the need for law enforcement.Â  In 2008 an organization known as â€œLawyers for Burners,â€ popped up in response to the law enforcement!Â  In addition, today, there are firefighters, EMS, nurses, doctors, communications support and even mental health support that is needed and provided for.Â  Not so self-reliant after all!Â  Not even close, in fact.Â  It is clear that when a population hits several thousand, radically free living is impossible, especially without strongly felt, shared values. 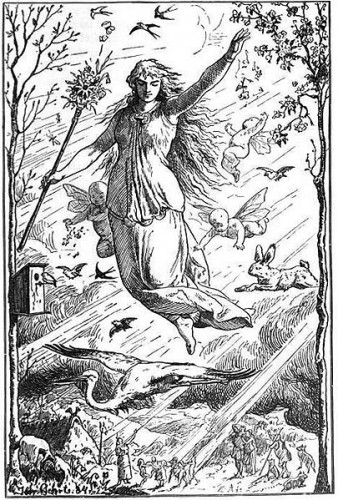 Celebrating the passage of the seasons is an instinct we all share.Â  But the cycle must be taken as a whole in order to accord it its proper value.Â  The burners seem to be missing something.Â  The burners constructed the Temple, and then they torched the Temple.Â  They constructed a Man, and then they burned the Man.Â  They know how to create and they know how to destroy.Â  It is a thrill, no doubt.Â  But can you imagine the look on their faces if they were to ever witness a resurrection?