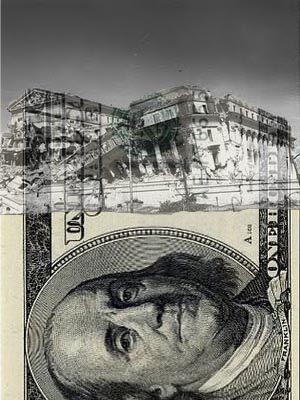 Ideally, someone would start publishing a newspaper dedicated to positive censorship.

Imagine a newspaper which only contained mention of what actually is not the news, and why. Avoid this panic. Eschew this trend. Escape this drama. And the ubiquitous mention of small risks elevated into apocalyptic scenarios as a way of whipping up a frenzy, uniting the tribe and selling media, of course.

$pocalypse is one such hyped story. Yes, it’s bad — but it’s temporary. This is just one hiccup in a long line of hiccups to come as your country descends to the level of Brazil (Brazil has a much-hyped economic revolution at this time which consists of selling its labor to more developed nations; Brazil itself remains unstable and a terrible investment).

The S&P degrades the worth of the American dollar and people cry out, “Why, God, why me?” — the answer is obvious, because the S&P told you in their press release, and it has nothing to do with God: your politicians are infighting so much they can’t fix your budget. You are unstable. Good luck USA. Signed, S&P.

In the meantime, the press is having a field day with your fears. If they really score, they’ll sell a ton of newspapers, television ads and internet banner impressions, and also convince the frightened flock to run out and stock up on batteries, canned foods, rifles and other consumer goods. Talk about spending your way through a recession!

But really, everyone is looking at this all wrong. It seems like the end of the world because it’s happening right now, but really, it’s a friendly notice.

The economy is telling us that we’ve over-valued it for years. First the internet boom, then the housing boom, now the energy boom, next the Apple boom, and some other boom after that. Booms are easy to create: if you get all the sheep to think they’ll make their next big lottery-style retirement-inducing score in some market, they all take their hard earned dollars and run as fast as they can to join the trend.

99.9% of them get fleeced, a few get rich, but in the meantime having that money in motion alone causes it to be more desired, hence more valuable, hence keeps pumping the economy up so vigorously that even if it is a leaky boat, it floats — for awhile.

The press and pundits (and other professional busybodies, neurotics and spoor-sniffers) want you to think $pocalypse is upon us and this is the end. That’s a sleight-of-hand; $pocalypse is not the cause of the end, but a symptom of our ongoing decay.

What we’re getting now is an inoculation. It’s a wake-up call that our money is not invincible, or rather its value is not. It’s the economy giving us a Zen master slap to the face and telling us that if we don’t stop chasing consumer booms, and start producing things of actual value, we’re going downhill.

The talking heads don’t want to face that. In order to achieve that level of organization, we are going to have to — as we did in balancing our budget — make some hard decisions about who we are. Entitlement state or competitive state? Centralized bureaucracy or culture? Production or “service industry”?

But we will have to face these things, and sooner rather than later. Thank your lucky stars for $pocalypse. It’s not as bad as it could be — it’s not 1929, when you measure actual impact on our lives — and it has shaken us from our stupor of invincibility, so we start making decisions like they count, again.