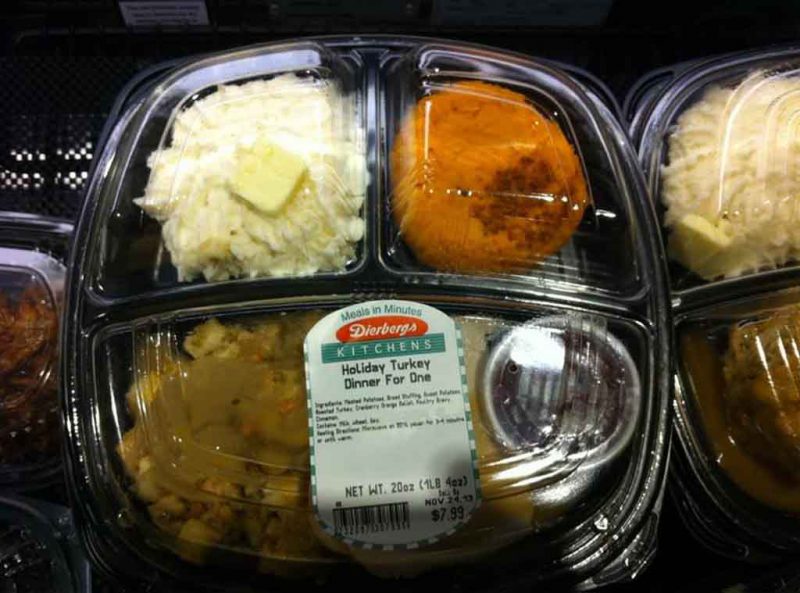 Normally, Americans celebrate Thanksgiving by gathering in their mortgaged homes, glad for a day off from their relentless jobs where whoever is most capable receives all the work and everyone else slacks off. Meeting their relatives for the mandatory once-yearly sniping over who has the better job and car, they sit down to eat.

At a large table, they munch down six thousand calories of mostly ceremonial foods that none of them would eat ordinarily while arguing politics with relatives they detest despite not believing that any of their political viewpoints can save this civilization from killing itself through stupidity.

Then, having officially celebrated and decided that they had a “good time,” they will shake hands and go into the night, successfully having purchased the ability to ignore holidays and in fact America itself for another month before Christmas rears its ugly head and they have to buy more overpriced but on sale junk for each other.

Maybe we should just get realistic about this holiday.

You get a few days off a year from constantly working on the treadmill to keep the tax coffers full so that the underclass can be subsidized to vote. You get only so much personal time, since people fear being alone with their thoughts, and most of it is dedicated to making others feel better about their dying civilization.

This year, do not pursue individualism, which is also known as your appearance to others and the optics of your success; pursue individuality, and spend the time alone figuring out your world. Enjoy yourself without the complications of others. Send the kids to bed early, brainwash the spouse with television, and go your own way.

Thanksgiving no longer has a point. You are celebrating dead traditions of a dead and gone nation. Diversity America sees it as a holiday where they get to enjoy what only White people once did, in the prevailing theory of our time. Soon it will be as nonserious a holiday as July Fourth.

How many of the nü-Americans know what July Fourth is about? If asked, most think it is a civil rights holiday or related to WW2, or maybe our victory over COVID-19. It is just another day off, flavored with flags and fireworks, just like the “French Bread” in the store is the same stuff in a different shape, or the “Italian” sandwich is the same stuff with a little salami added.

Everything here is fake because democracy is fake. Democracy exists by making promises to citizens, having them vote and then forget about the situation, then taking the money and funneling it into government and industry so that those people are in the control of those who sign their paychecks not pay them.

That everyone went to sleep for two centuries shows us the crisis of democracy: people are “accountable,” but no one is ever responsible. By celebrating its fake holidays, you just endorse it. This Thanksgiving, burn the flag and turn off the propaganda, and go discover real life instead.

Why You Should Never Give an Online Service Your Phone Number | DiversityWatch (November 24, 2022)