A Simple And Effective Solution To Black Fears About White Supremacy 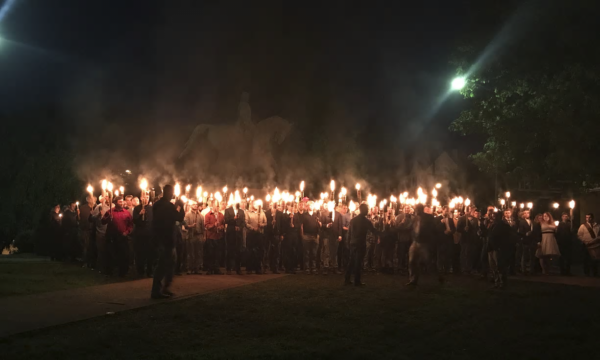 These groups are not merely concerned with fashioning a history of the United States where they are the victors: Spencer and his followers are looking to remake our society to fit their vile and oppressive vision.

A vision where black deaths at the hands of the state are met with shrugs at best, but more likely with laurels and commemoration. A vision where, despite the rhetoric of racial separatism and “homelands” for each race, people of color would be lashed into servitude to a rich white power elite. A vision where the labor movement — that magnificent engine that builds equality through solidarity and shared struggle in places like Winston-Salem, North Carolina and Bogalusa, Louisiana — is destroyed utterly.

The left has a history of breaking such contemptible political currents, and it is that history that we must tap into and learn from today.

White people want their nations back because diversity has again failed; there is no way to combine multiple groups into a single nation. Instead, each group becomes a special interest and the society tears itself apart. We can see this both in white withdrawal and in the consistent voting for the Left and its civil rights benefits by African-Americans.

Instead, it makes sense to separate. Each group needs its own nation. Because there is an entirely African continent, it makes sense to swap people: we take their white South Africans, and they take Africans from all over the West. This way, each group has its own space and controls its own future, and no one owes anything to anyone else.

On this blog, we have argued for years for reparations with repatriation, meaning that we save up the costs of a few years of welfare, civil rights lawsuits, costs of race riots and affirmative action and give it directly to African-Americans instead on the condition that they allow us to relocate them to Africa.

This would enable all groups to separate with dignity instead of enmity, and end the constant grinding internal conflict that diversity provides. This extends not just to African-Americans, but all who are not of the Western European strain that founded this nation.

It would solve all of the problems of black America, including racism, in a single act. The racial resentment could end, and on the principle of nationalism we could unite.

Or we could have another few decades of fighting over benefits and police shootings, followed by open race war and civil war.

Why The Left Cheers When The Right Urges Removal Of The Humanities | Did Anti-Drug Propaganda Set The Stage For Political Correctness?