A Floating Tower Of Babel 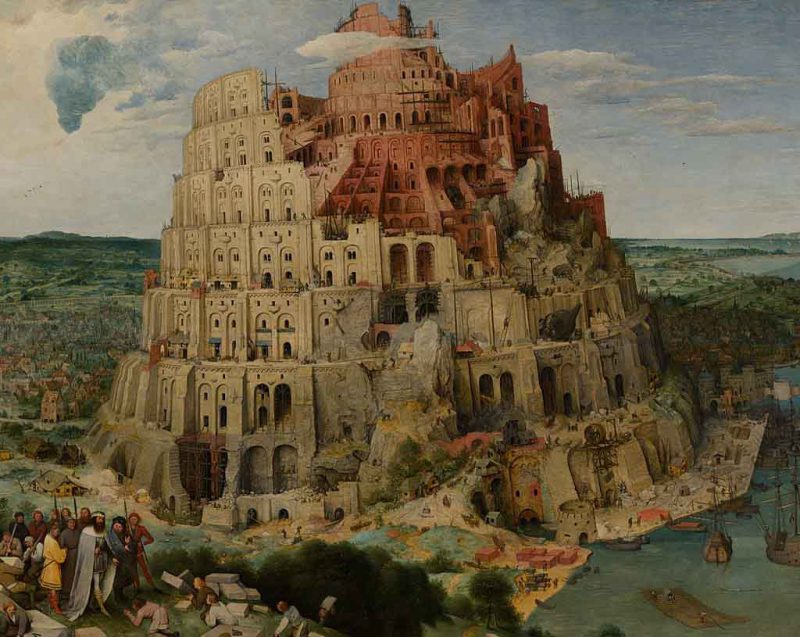 Imagine a time in the future when humanity has given up hope. Its governments, burdened with trying to support too many contradictory special interests, collapsed. Its citizens, mostly domesticated to the point of being wholly ineffectual, died out by the billions. Now, all that remains is an anarchistic wasteland where might triumphs over right.

On the oceans of this ruined Earth a massive barge floats. Constructed by industry from before the fall, it occupies a space the size of several football fields and is maintained by a cadre of shipwrights who keep it afloat and functional despite aging technology.

They realize soon that they need more people on board so that they have defenders against the occupants of other yachts; in the dystopian future, whoever has the most people in its army tends to win. To that end, the cadre invites in new occupants from other drifting wrecks — former battleships, yachts, cruise shifts, rafts — and brings them best of them over to the barge.

A caste system of sorts results. The cadre live below decks in the darkness and frequently swim, being tasked with maintaining the metal surface of the barge that comes into contact with the ocean. It needs cleansing of barnacles and repair of metal fatigue and rust. This group spends its time outdoors enough that a darkened cavernous metal room provides adequate living.

The topsiders, on the other hand, came from upright boats and think in terms of having cabins with windows. Luckily, the cadre is able to organize them to scavenge enough floating material to build a layer of wood cabins on the surface of the barge. Since the cadre houses itself toward the stern, the topsiders build their wooden castle near the bow.

Now the topsiders begin to add things that are not cabins, like meeting rooms, restaurants, even a church. This causes consternation among the cadre.

“We already have these institutions,” argues Justinian Q. Broadrick, one of the divers.

“Their institutional needs are different than ours,” replies George Christian Avalanche, an elder. “What we have works for us, so let them have their own.”

The argument raged back and forth, and finally, Neville D. Streetcleaner, another diver, summarizes it. “Our institutions belong to us, and if we let them in, they will fit them and not us, so let us not just allow but encourage them to do whatever they want.”

“This means that we’re losing control,” Broadrick says. “They can change our culture, and we can have nothing to say about it.”

“Perhaps we should just make it clear that our culture is separate,” adds Avalanche. “They have theirs, we have ours.”

“That might not be such a good idea,” throws in Ted Parsons from his seat in the rear. “Diversity never works, so now we have two cultures,” he says.

“Here’s a compromise,” argues Avalanche. “We let them have separate institutions, but demand they be mostly compatible with ours. That way, they do not change who we are, because although we are similar, the cadre is sort of a cut above. We are the founders. We can make this work by remaining separate from the rest, but allying with them.”

Streetcleaner moves to say something, but then stops himself. The topsiders go on making a little city on the flat surface of the barge, adding hotels and brothels, even a government building. None of what they add tempts the cadre at first, because they either have equivalents of their own or want nothing to do with the behaviors that require, for example, brothels or abortion clinics.

Eventually the topsiders reproduce in large enough numbers that their structure dominates the whole of the barge. It towers a dozen stories high with every conceivable part of a modern city crammed in, and the richest live on top in penthouses. They make money from entertainment, luxury, government, education, and the free press.

Some of the cadre are seduced, and they go aboveships and mingle with the topsiders, eventually interbreeding with them and becoming them. Underneath the metal deck, the cadre become committed about their identity for the first time, eventually seeing themselves as like a different species.

“We have kept this boat since the dawning,” says Avalanche, “and we need no one but ourselves. We might not be numerous enough to defeat a foreign enemy, but we are strong enough to keep them back, which is all we need.”

One dark night, by agreement among the cadre, the barge steers into the path of a crashing waves. With a chaotic sound, the ramshackle tower is swept from the deck, and vanishes with its contents in a debris slick heading out toward deep sea. The cadre nod and get back to work.