The Map and the Territory by Michel Houellebecq

The Map and the Territory
by Michel Houellebecq
269 pages, Alfred A. Knopf, $16 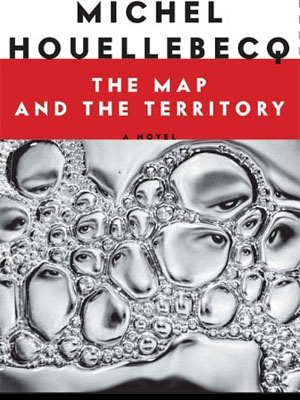 In The English Patient, Michael Ondaatje uses the map as a postmodern device, a type of meta-plot to a novel that then contorts the character-related plot around its metaphor. This is what distinguishes postmodern novels: the metaphor leads the characters, instead of the other way around.

However in The Map and the Territory, Houellebecq — a more mature and yet more emotionally coherent writer — shows us instances of maps, symbols, sensations and notions replacing actual experience. His point makes itself as his characters scramble to keep up with the metaphor, revealing that beneath all of the formalism and bluster of the human experience, there is a human experience we cannot communicate in public and it is lost to us when we let the public view of experience (the map) replace our actual knowledge of life (the territory).

Writing in the grand tradition of French literary provocateurs like Louis-Ferdinand CÃ©line and Gustave Flaubert in that in order to explore pleasure, he first explores misery, and then like Socrates finishing his dialogue, points toward the empty space indicated by the limits of all that has been discussed. Houellebecq crafts an uneven storyline in which sudden leaps occur through the impulsiveness of the characters, but this saves us his readers from extensive exposition of an ultimately unimportant nature, and delivers us instead on a wild ride that more resembles a descent into madness than the urbane novel of modern sophistication that his writings initially pretend to be. Where the postmodern novel is about an idea, Houellbecq’s novels are about characters reacting to an idea which is incomplete. They are tormented by what is promised but not evident.

This might categorize his work as “black comedy,” or narratives where awful things are described as absurdist and amusing. However, an underlying sense of emotion guides this process, such that the dark humor is a layer of surface on top of an emotional narrative. This does not fit into the modern literature rubric which like the work of Ondaatje combines the “workshop school” with the emotional demands of commercial television and the need for the work to have a semi-technical metaphor; in the workshop school, the writer develops a situation and fills in generic characters who are defined by their reactions, and the film-style emotional ending closes out the book rather abruptly, while metaphor gets layered over the top as a kind of narrative describing the narrative. Houellebecq takes another approach, which is to work from an idea outward to characters and then to put them in a situation that reveals their inner worlds and not just their knee-jerk reactions. The result will seem uneducated to the half-educated modern reader with his heady expectations, but unlike a typical book is not linear, but like an unfolding flower.

For the enfant terrible of postmodern literature, Houellebecq is at his mellowest on this book. The hyperbole is mostly tuned down, replaced with a kind of surreality to events that should reveal an underlying confusion but instead gesture an emptiness. Without giving away too much of the plot, this book can be described as the survey of a photographer who is fascinated by the objects of meaning in life: tools, professions and maps. Each of these implies a certain degree of purpose and selectivity, yet in the artist’s life as well as those of the other characters, what is demonstrated is generally mere reactivity, or finding life as it comes and tossing back a visual approximation of a response to it. Through these he builds a theme of the book, which is the confusion of the tool or labor with the meaning that is conveyed by the sacrifice made for it, a theme echoed in the protagonist Jed Martin’s labors as an artist.

It was then, unfolding the map, while standing by the cellophane-wrapped sandwiches, that he had his second great aesthetic revelation. This map was sublime. Overcome, he began to tremble in front of the food display. Never had he contemplated an object as magnificent, as rich in emotion and meaning, as this 1/150,000-scale Michelin map of the Creuse and the Haute-Vienne. The essence of modernity, of scientific and technical apprehension of the world, was here combined with the essence of animal life. The drawing was complex and beautiful, absolutely clear, using only a small palette of colors. But in each of the hamlets and villages, represented according to their importance, you felt the thrill, the appeal, of human lives, of dozens and hundreds of souls — some destined for damnation, others for eternal life. (18)

Like Scott Fitzgerald before him, Houellebecq receives criticism for the compassionate and yet disinterested way he portrays the collapse of society around him. People stand revealed for what they are, in the overlap of stereotypes and archetypes that most people use as cloaks of personality, and the result is a lifelike impression of modern life. It does not need judgment: like most things Houellebecq, a projection is made an an absence is noticed, like negative space used in a painting of a landscape at night. The empty spaces are both lack and possibility, since they await these characters to wake up and fill them with something meaningful, a light or life.

Translator Gavin Bowd maintains the unique rhythms of Houellebecq’s prose, which is Gallic to its core and in its pacing, but seems “English-aware” such that it seems alert to what will happen in translation. Unlike previous Houellebecq novels, The Map and the Territory replaces much of the quirky and fragmentary prose with solid paragraphs that rise and fall like sand dunes viewed from an airplane. The rhythms are designed to be easy and hypnotic, such that the author can introduce us to new strange worlds and then leave in our minds the barest seed from which revelation will spring. These seeds occur in each quadrant of the novel and are layered with addtional meaning, leading to a spring forth of impressions that are not stated. This allows the postmodern metaphor of the novel to remain mysterious and yet achieve clarity.

For two minutes he went through the owner’s manual of the Samsung ZRT-AV2, nodding his head as if each of the lines confirmed his dark predictions. “Ah, yes,” he finally said, handing it back. “It’s a beautiful product, a modern product that you can love. But you must know that in a year, or two at most, it will be replaced by some new product with supposedly improved features.

“We too are products,” he went on, “cultural products. We too will become obsolete. The functioning of the system is identical – with the differences that, in general, there is no obvious technical or functional improvement; all that remains is the demand for novelty in its pure state.” (105)

Like many of the books we review here, Houellbecq’s latest is not intelligent in the sense of adapting to its surroundings and profiting from them, as he easily could by writing a Barbara Kingsolver or Jodi Piccoult style novel: an enigmatic setting, fractured characters defined by their need, and a bittersweet story with an uplifting and yet moral (or politically correct) ending. While in this book Houellebecq provokes obvious scared cows and taboo gateskeepers less than ever before, the cynical view of modern society as based on lies touches every aspect of the world he portrays, and so little must be said. This is not an intelligent book; it is a genius one, and not for its “intellect” so much as its honesty, and its willingness to speak of the portion of our lives we cannot put on a map, which is the yearning of our souls for purposefulness and meaning in the midst of a modern wasteland.