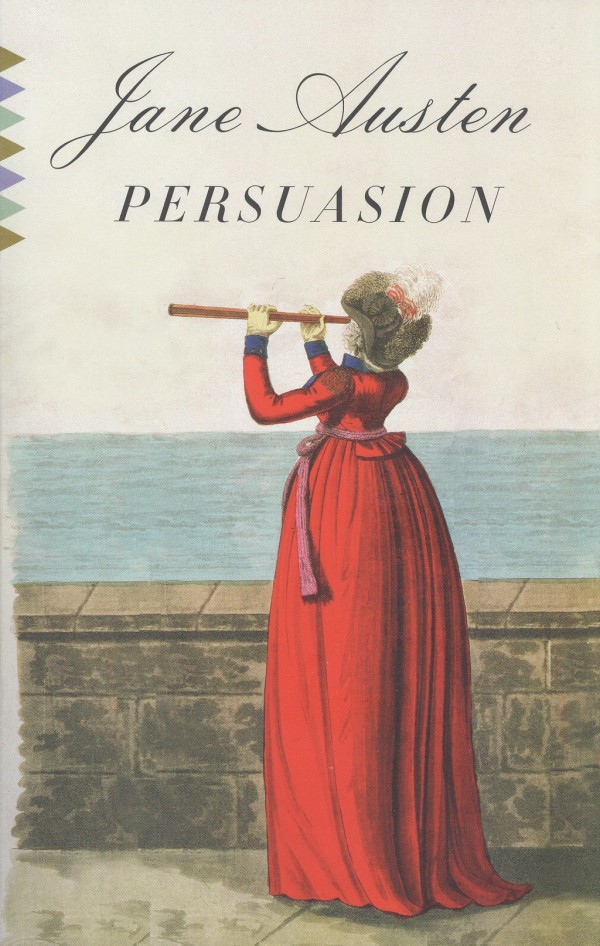 Jane Austen specialized in writing books that on the surface were the type of social chatter one might find in a tabloid for Oxford-educated upper middle class people, but underneath the skin, argued a philosophy of human excellence which unites morality and natural selection in a harsh judgment of humanity akin to Nietzsche’s analysis of man as a bridge to the superman.

In Persuasion, Austen revisits a timeworn tale: boy and girl fall in love but have no immediate future together, so being sensible people, they avoid a Romeo and Juliet and avoid marriage. Boy then ventures out into the world and makes his fortune. When he returns, girl wonders if boy still cares. Both are now caught in a high society version of the prisoner’s dilemma: the first person to offer himself or herself puts that person at great risk of being denied and crushed, but if both somehow meet in the middle they can begin the happily ever after.

Unlike earlier books from this author, Persuasion features fewer scenes of people interacting through dialogue, and instead describes these through an omniscient narrator closer to what Laurence Sterne used in A Sentimental Journey or Celine’s nearly omniscient narrator-protagonist in Journey to the End of the Night. This is a story told, not “shown” as every idiot creative writing instructor demands, which enables it to move quickly, make more pointed comments on the nature of the people involved, and save conversational points for — in what is almost a return to her earlier drafts of epistolary novels — lengthier communications where characters address points of interest in long soliloquoys. If you ever wondered what Ayn Rand would look like in the hands of an actual master, it is Austen’s dense but informative prose that shows a clearly female voice in its use of multiple dependent clauses in long sentences which elaborate on inter-related concepts. The writing has more in common with Kant than stereotypically “female” voices in modern literature, but preserves a female perspective by approaching from context and slowly getting to the point, in contrast to male characters who are very objective-driven.

Austen elaborates on her perspective of gender differences throughout the novel, culminating in an analysis of the reasons for the differences between the sexes:

I should deserve utter contempt if I dared to suppose that true attachment and constancy were only known by woman. No, I believe you capable of everything great and good in your married lives. I believe you equal to every important exertion, and to every domestic forebearance, so long as — if I may be allowed the expression, so long as you have an object. I mean, while the woman you love lives, and lives for you. All the privilege I claim for my own sex (it is not a very enviable one, you need not covet it) is that of loving longest, when existence or when hope is gone. (233)

This follows up on an earlier soliloquoy where Anne expresses the idea that men are based in conquest of objective, where women seek to frame themselves in a context and make that balance. Through this continuing analysis, she opines on the differences between men and women and which roles befit both as a result; this complex analysis sprawls in dialogue throughout the novel. A more interesting line of inquiry arises from Austen’s analysis of good versus great in terms of people, picking up on another thread in the novel which is the crisis within the “First Families” (titled aristocracy) over their own quality control, a line of thought which in Austen’s view is tied closely to the question of who marries and what children result, and whether people should be accepted merely for social position or for something more. She does not attack the aristocracy, but calls for filtering within it to keep picking the best, in a method of eugenics which emphasizes the positive aspects of promoting the best more than a desire to smite the worst:

Lady Russell confessed that she had expected something better; but yet ‘it was an acquaintance worth having,’ and when Anne ventured to speak her opinion of them to Mr. Elliot, he agreed to their being nothing in themselves, but still maintained that as a family connexion, as good company, as those who would collect good company around them, they had their value. Anne smiled and said,

‘My idea, Mr. Elliot, is the company of clever, well-informed people, who have a great deal of conversation; that is what I call good company.’ (147)

Much of the language has been altered since the writing of this book by our egalitarian times. In Austen’s parlance, clever means intelligence instead of merely shrewd; well-informed means an ability to analyze and retain information; great deal of conversation refers to a constant intellectual activity and ability to creatively analyze situations and people. Society has since dumbed down these terms to mean entertaining, memorization and chatter, but in the context of this book their meaning is unmistakable and is elucidated in earlier dialogues.

Persuasion will confuse any reader who thought The Lovely Bones or Flight Behavior were profound books, and baffle Randian readers who like one-dimensional characters and scenes where only one idea is transacted at a time. But in this elegant and engrossing novel ideas more akin to what Plato or Nietzsche might discuss emerge from the everyday of society both high and low, and for this reason Persuasion lives on among those who wonder if, after all, there is a solution to the human problem.

“Issues” | Democracy in recession as its true face is revealed