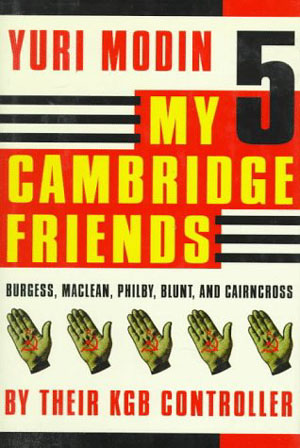 A wealth of raw information can be about the moles in Western intelligence during the Cold War, but very little of the underlying question has been answered. This question is why they did it; why educated, often privileged and successful men would turn traitor on their own country for the sake of Communism.

Modin reveals few explicit nuggets of information but instead, in the way of the career spy, knits it all together as a revelation of psychology. For this insight the book is remarkable, and probably should be read as a companion to Spycatcher by Peter Wright which fills in many of the strategic details.

As an author, Modin makes a reasonably astute decision. He could not reveal much in the way of new information about of loyalty to the KGB and the many ex-KGB operatives who are powerful in the New Russia. He also knew the Western audience is still fascinated by this betrayal on a grand scale and for the most part, do not understand the motivation behind someone of this nature.

Consequently much of this book is written not between the lines but for those who collage those lines, overlaying similar patterns until an underlying shape emerges. That shape takes several forms: first, the fractured and socially competitive nature of Western society, especially children turning on their parents, and second, the actual similarity between WWII-era and Cold War ideals in the USSR and UK. His point seems to be that if you take the disaffected, add a high social reward for going against what the hated parents idealize, and then legitimize a quest against “fascism” and right-wing thought in any form, you create a witch-hunt which knows no borders.

He…collaborated with us not because he agreed with Soviet policy but because, like his friends from Cambridge, he believing in one overriding truth, that the happiness of humanity could be accomplished only in the wake of a world-wide revolution…He believed that the foundations of the revolution were set in the USSR, but that its dynamics lay in the West. (179)

In Modin’s admittedly slanted narrative, the glorious Soviet spies were simply taking the dogma of their motherlands one step further. If we are fighting fascism, why stop at neoconservative ideals? Go to the full extreme. If we are shocking our parents, why content ourselves with sex and alcohol? Take it to a new height by turning on everything they hold dear, while using their beliefs as a germinal justification.

As other reviewers have pointed out, Modin is the archetypal unreliable narrator. He is not only apologetic but laudatory for the failed Soviet regime, although he doesn’t say anything really all that positive about Communism (he doesn’t however speak against it). He is vague about specifics and wrecks any timeline with his anecdotal format. Finally, he muddies the waters regarding his own role, as if he re-used an outline from his legal defense notes.

However, he also slips in several insights alone the lines of the themes mentioned above in such an artful way that they sneak up on us readers like spies in the night. One of his most damaging assertions is that the West faced a choice to swing either left or right, and by being so ardently anti-Nazi, the West placed itself into sympathy with the Communist cause. This exacerbated the youth rebellions of the pre-war period and encouraged intellectuals to become Communist, which they got away with simply because of the disorganization of British intelligence.

Large numbers of students in the 1930s had sympathized with the Communist cause, and when war came, all they needed to tell the investigators was that this engagement had been a temporary enthusiasm. When the Germans first began bombing London, Wormwood Scrubs prison (from which our agent George Blake escaped in 1966) was gutted by fire. Unfortunately for the British espionage and counter-espionage services, all their archives were stored in the prison. We were lucky enough to get wind of this cardinal fat shortly afterwards, and thereafter we worked in the knowledge that all the lists of active and inactive Communists in Britain had gone up in smoke, along with all of the detailed information in their files. (106)

Ultimately, Modin comes across as a Soviet spy: looking to curry favor with useful idiots in the West, ready to place the blame on Western decadence, and laudatory of these five men who in addition to being traitors were trainwrecks in their personal lives. This reviewer found his explanations wanting and his justifications unconvincing, but with the stolid doggedness of a good spy, his analysis finds its mark.

The Cambridge Five, like the 1968-era hippie protestors to follow, were the spoiled children of controlling parents who rebelled through ironism and embracing the enemy, which all but the leaders in the West could see was closer to their own ideology than that of the former enemies on the Right.

While no enduring answers come out of this book in regard to the specific cases it discusses, the broader pattern that is correctly identified leaves the reader with the haunting sense that we in the West are all useful idiots if we do not alter our direction to shear away from the left, even if we risk being called fascists as a result.