Mugged: Racial Demagoguery from the Seventies to Obama by Ann Coulter

Mugged: Racial Demagoguery from the Seventies to Obama
by Ann Coulter
336 pages, Sentinel, $16 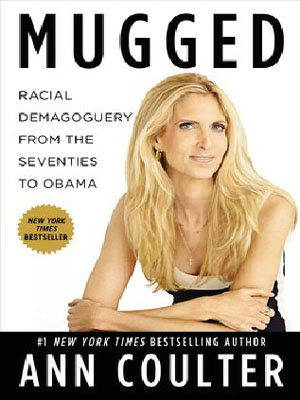 For many years, the subject of race has been so carefully tinged with the trauma of the past that we did not even pretend we could discuss it. Most generation X+ citizens grew up under a regimen of teachers, politicians, media and entertainers telling us the one right way to think on this issue.

Recently this taboo has fragmented in light of the shocking polarization of American voters. 60% of white people vote Republican; everyone else votes Democratic. The white people who vote Democratic tend to be the lost: single mothers, scared post-collegiate children, the neurotic and the miserable. This tells us that among the healthy, representation is exclusively a racial question. Whites vote Republican, and everyone else votes against them.

Ann Coulter takes on this challenging topic in her latest book, Mugged: Racial Demagoguery from the Seventies to Obama. As a writer and a product, Coulter has a foot in both worlds, embracing a witty mainstream conservatism but also exhibiting a challenging realism that might even be called Nietzschean, or Machiavellian. Coulter may write for the mainstream middle class audience, but she is aware of the dark underworld of realpolitik that manifests itself in all that we do. For most of her career, this duality has created ambiguity about what she actually believes. Her books often come on strong, make some really good points, and then spent the next 200 pages creating a fog of non-disclosure so she doesn’t get too close to the really dangerous parts of reality and politics.

With this current book, Coulter resolves the duality by keeping her points clinical. She doesn’t read into her own thesis beyond the provable and documented, but she lets us draw our own conclusions with ample amounts of accurate but hyperbolic liberal-bashing. In this book, her goal is to explore the use of race by liberal parties as a kind of “get out of jail free card” and a limitless credit card on which to charge their own wealth redistribution agenda. On top of that, she explores the history of racial denial in the American media and then seeks to prove how no one, black or white, is benefiting from this situation. As Coulter might say, the only people profiteering from this situation are liberals and their media lapdogs:

It produced a destructive welfare state that was untouchable for decades. It got us anxiety, anger, fear and a major political party incapable of making an argument more sophisticated than: “You racist!”

And then it got us the most left-wing president America has ever seen.

When there were so few cases of white-on-black hate crimes that liberals had to start making them up, wasn’t that a clue that the Klan wasn’t preventing black progress anymore? If white people could be shorn of all racism overnight, it’s not clear how that would improve the black condition. (261)

The way this book approaches race is reminiscent of Colin Flaherty’s White Girl Bleed a Lot: The Return of Race Riots to America, a book which similar takes a non-judgmental view of the failure of American racial policy as a policy and not as an indictment of any ethnic group. Coulter goes out of her way, as Flaherty did before her, to make it clear that her book is not about black people. It’s about white liberals and the racial policies they advocate and the consequent failure of those. Much of this book, like Flaherty’s, involves research into historical events and current news items in which there is a disconnect between reality and the way the liberal media and liberal politicians have chosen to explain the situation. Coulter’s greatest vitriol seems to be reserved for WASPy journalists, politicos and public figures who keep beating the tin drum of “racism” while ignoring the fact that liberal racial policies do not work for anyone, black, white or other.

The thrust of the book is on white-black relations, not the broader question of race as a whole and the Democratic intent to replace the white majority with a third-world majority and thus secure a permanent demographic majority for Democrats. As said above, Coulter stays within the immediate and clearly linked because this book is like all of her books an introduction both to a mainstream conservative position, and the underlying reason behind it which may be more complex than most people are willing to undertake.

Among the first hundred pages, Coulter repeats a disingenuous argument about how Republicans fostered racial equality through rule of law, while Democrats opposed it. This is a complex area involving the flip-flop of both parties from previous positions, moving Republicans from the left-ward position toward a right-wing one. She does better when she focuses on the difference between liberal views and rational views of the situation, instead of trying to rally the troops toward loyalty to a party name. It is this type of mainstream argument that loses Coulter readers among the quiet educated and thoughtful types who would like solid logical reasoning behind their positions. They are a minority with a huge trickle-down effect on those who recognize their wisdom, so they are important in the long-term but less important to product success.

Like Flaherty, Coulter approaches the African-American crime statistics with fairness. She points out numerous times that most victims of black crime are black, and that the permissive “rehabilitation” policies of liberals are to blame, in that they not only fail to discourage crime but effectively incentivize it.

Based on their having no understanding of human nature, the smart set turned American cities into petri dishes for crime and degenerate behavior without punishment. Thousands of Americans died, were raped and disfigured in criminal acts made possible by the Warren court, the ACLU, liberal professors and activists, whose single-minded policy objective was to return criminals to the street. (94)

For any faults she has, including the aforementioned prole drift of one of her arguments in the first part of this book, Coulter breaks new ground by opening up the issue that we’re afraid to look at here in the West. Both the USA and Europe are awash in internal division, complexity and cost from their policies of diversity. While Coulter does not argue against diversity itself, she shifts the argument away from racism toward criticism of liberal pluralism and its effects in the context of diversity. This is a huge first step toward having an issue we can discuss sensibly again, and leaving behind the Soviet lock-step with liberal ideas that has prevented that discussion until now.

The public accepts the imminent death of the West | Rapunzel, let down your hair