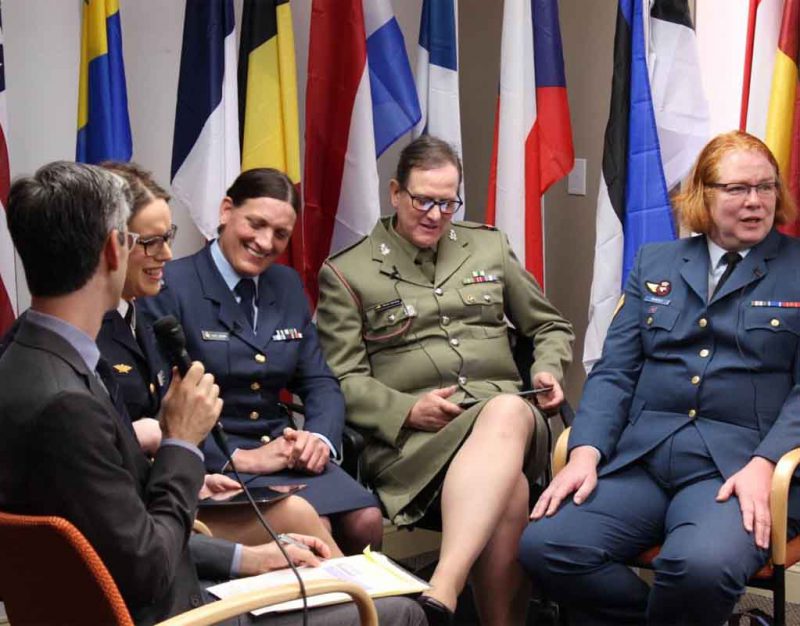 Commander Gibbs opened the doors to his office to meet with his superior. The representative from the Pentagon was wearing a bright rainbow colored button with the letters D.I.E on them. The Commander glanced at it before taking his seat behind his desk.

The other man extended a hand, “Lester, a pleasure to meet you.”

Commander Gibbs glanced back at the man’s button again, “Why are you wearing a button that says DIE on it?”

The other man looked down and laughed, “Die? No, no it stands for diversity, inclusivity and equality.” He said in a most triumphant voice. The commander frowned and wondered how it could be overlooked that this acronym also spelt DIE, but he said nothing of it. Once the other man had set out his documents before him, he began.

“So first things first, the recruitment process is trying to be exceptionally fair, in an attempt to make it as equal as possible, we would like to lower the standards for the training regimen, so that women and other genders may participate, and not be at a disadvantage.”

Even though the commander sat with pen posed, he did not write a single letter on his pad, “I’m sorry what?” He said, blinking rapidly to make sure he wasn’t sleepy. The man repeated himself patiently and the commander set down his pen, “Sir, with all due respect, the training regimens are in place to make sure that boys are ready to go out onto the field.”

“People,” The man corrected, “Not only boys anymore commander, but people will be ready to go out onto the field.”

“More to my point, we cannot, how did you put it, lower the standards for entry; these exercises are designed to test individuals to make sure they have the grit and strength to enter the war zone. People who don’t pass the tests will likely not succeed in combat and get others killed or wounded, leading to our defeat.”

“I don’t think you are. We are trained and tested veterans, we know what it takes to go out onto that field, I’m telling you, this is no work for nancies.”

“Be that as it may, you are a veteran yes and you have seen combat, but that was when the system was driven to encourage men into the field. Now we are opening up our minds, including all genders to have a go at it. You might just find that things will change. Now, we will let the results speak for themselves and end that matter there, so let us move on.”

The commander was not happy about it, but he agreed, grumbling all the while as the man moved onto the next order of business, “We would like to fly the LGBTQ flag when going out to battle. It can be sewn onto the uniforms and painted on the side of aircrafts and other vehicles, we think.”

Gibbs held his pen just over the pad but he could not bring himself to write anything the representative was saying. Instead he put it down once more and said as patiently as he could, “Sir, our vehicles and uniforms are typically camouflaged, we don’t go painting big rainbows on the side of it, since the enemy would see us coming a mile away.” He was trying to find a way to reduce their influence here at his base and so he tried bargaining, “We can include it on the uniforms at base here, but when we’re out in the field, we cannot wear them.”

“Hmm, now that simply won’t do. We have to be inclusive, commander, don’t you see? The same way people have pride in the US flag, some have pride in other things. There can be no negotiating in this matter, we must have the flag on all things aforementioned, the vehicles and the uniforms, even when a soldier is in deployment.”

“Sir, we don’t even wear the flag of the United States when soldiers are in deployment.”

“Perhaps, but this is not that, and it must be shown, to show support and to be inclusive. Now final act of business, soldiers must announce their preferred gender pronouns before engaging in any activity, and if someone forgets, they must be asked how to be addressed. This is crucial to ensure no one is misgendered, and we will have monitors in place to ensure that this is adhered to. Your drill sergeants like to yell at the soldiers and call them ladies, well there shall be no more of that, so we will see about implementing that as well.”

Now the commander had sat back in his chair, his hand over his mouth. He was not sure what to make of this, so he decided he wanted to see how ridiculous their demands could have been, “What do you mean before every activity? Clear to elaborate?”

“Certainly, whenever there is official communication between two parties, gender pronouns need to be established beforehand. So any radio communication, before drills the crowd should consent to a gender neutral term in which to be called…”

“Why don’t we just have cards made out?” The commander said in a sarcastic tone, “And they can share them out before a conversation?”

The other man seemed enthusiastic about this idea, “Or rather they can wear them! Yes, an excellent suggestion commander. I’ll just add that to the uniform amendments,” he said, and began scribbling. The commander recalled the gun in his top desk drawer and wondered what would happen if he just took it out and shot himself…or better yet if he just shot the representative. Another idea seemed to have struck the man but the commander’s focus was on the desk drawer now…

The commander tried to imagine what it would be like to implement these changes that were being suggested to him:

The squad descended into dense forest as they eyed the terrorist encampment. One person who self-identified as an Apache Helicopter made soft chopper blade noises with his mouth as he pretended to be able to scan overhead. He then conveyed to them what he thought he saw. They all nodded and began to fan out so as to surround the camp. One of the terrorists who was patrolling the perimeter caught sight of something bright and colorful in the bushes and without warning he fired into the bush. A terrible scream pierced the air and the other terrorists gathered around.

“Hey, there are men here!” the terrorists were saying.

In response to which one person who identified as a N-Strike Elite Strongarm Nerf Dartgun rose from the bushes in anger, “That is not a gender neutral term!” the Nerf soldier shouted, but the terrorists killed him before he could finish. At this point most of the others panicked, some ran, some cried, some screamed and charged, some just wet themselves and curled up in a ball hoping they won’t be found. They were found, and all were killed. Afterwards the terrorists laughed.

“These Amerikans have stopped the army, and are now sending the circus into battle.”

“No, no, habibi, Amerika is the circus now, these are just some of the clowns.”

The commander shuddered at the thought and so he was resigned to do what he had to do. He slowly reached forward and opened his desk drawer.

“Are you listening commander?” said the nervous representation.

But Gibbs was staring at the gun which lay in his desk drawer. The commander pulled out the magazine to ensure there was still bullets inside the gun, then slid off the safety.

The representative was pushing his chair back slowly, thinking he would lose too much face if he just made a dash for the door, when the commander pointed the gun at him. He broke down into tears, begging for his life and urinating all over himself. Gibbs steadied his hand and pulled the trigger.