Literary Outlaw: The Life and Times of William S. Burroughs by Ted Morgan 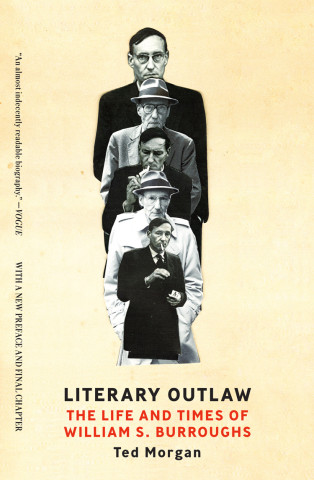 Society possesses us, both as individuals obligated to do things, and as iconography. William S. Burroughs for example is a “counter-culture icon,” associated with the beats and the hippies, but also the darker side of counterculture which rages against the complacency of society and threatens it with images of apocalyptic discontent and dysfunction: junkies using each other like apes in the jungle, cops predatory like praying mantises, control structures like brain-parasites that take over our will and choice.

Like all things which are touched by mainstream culture, and thus in turn by the lowest common denominator of thought which amounts to wishful thinking and personal adornment, Burroughs gets dumbed-down in the mainstream narrative. To the average chattering smile, Burroughs represents dark things for their own sake, and dropping out of society because it isn’t dark enough. Few have actually looked into the motivation and beliefs of the man, but Ted Morgan’s biography of Burroughs attempts to that in addition to chronicling his complex, circuitous and often obscure path through life.

Morgan’s method is to talk to the actors involved in extensive and probing interviews and to then assemble a mass of details, which he lays out in a roughly linear fashion and correlates wherever possible to moments in Burroughs’ work, including alluding to and quoting passages from Naked Lunch, Junky, Queer and other books. This enables him to tie together the many threads, and Burroughs as a man who wrote in vignettes using symbolic characters like a radio play did nothing if not create many overlapping threads, and from them allow a narrative to emerge which can then be commented on. In the case of the biography, the ongoing narrative is the motivations behind Burroughs’ art and chaotic personal life.

Literary Outlaw: The Life and Times of William S. Burroughs begins with a depiction of the younger years of the author, with extensive probing into childhood incidents that were revelations for him of degrees of his alienation. We hear about childhood sexual abuse, his unhappiness at school, his revelation of homosexuality, and his fascination with all things criminal and drug-related. From this Morgan builds up to his real triumph which is unpacking the years during which Naked Lunch, which is universally acclaimed as Burroughs’ best work, was written including the method of its production and the involvement of others. After this, many biographers would drop off, but what Morgan does is continue following the threads and characters in Burroughs’ life, showing where each one came to an end and contrasting its results with its initial promise. Without being judgmental, it’s a provocative picture of the Beats and of Burroughs himself, because it shows at the end of the day what worked and what didn’t, and what regrets persisted because of bad decisions made long ago.

Grafted onto the Western genre are Burroughs’ usual preoccupations with mutation and space travel. Man is like a fish about to exchange gills for lungs, but for some reason he is stalled and cannot quite make it. Burroughs wants to give him the final push, which he believes will come as the result of infection by a new virus. The antidote to the virus will help forge the new man, who will have thoughts and behavior patterns that are not imprinted or prerecorded. “Everything we have been taught,” says Kim Carsons, “all the conventional feelings, do not apply.” (593)

Those who study our crisis in the West will note similarities to others thinkers. Burroughs identifies the spoken/written word as a “virus,” pointing out how it takes on a meaning unrelated to its referent and that this meaning manipulates our ability to conceptualize it. This is strikingly similar to Nietzsche’s observations in “On Truth and Lies in an Extra-Moral Sense” where he speaks of our interrupted knowing which is reprogrammed by the corrupted definitions of words.

Further, like many in the postmodern era, Burroughs obsesses about control. Who is in control, and how do they control people who are acting through what they believe is free will? Where lesser authors wrote about imaginary totalitarian regimes, Burroughs was busy writing about how the power of human language and manipulation would create an invisible power structure that controls people without them even noticing it. The themes of control, power, addiction and manipulation run throughout all of his works but are most vivid in Naked Lunch, and Morgan picks up on those threads here and expands them.

Morgan also proves an insightful observer of the social backdrop to Burroughs’ experience:

The mutation from Beat to hippie meant a switch from grass to acid, from literature to music, from a small group of writers and artists and jazz musicians to a mass youth movement, from an anti-political stance to a coalition of antiwar, civil rights and environmental movements, a great nest into which flew birds of every feather, from yippies to radical nuns and priests. (365)

Part of the unconscious mission of this book is to set the record straight, and liberate a complex character from the public fiction about him into a space where he can be understood. That requires sacrificing the public image of him as created by industry, social pressures and the need of people to mythologize and impose narrative in a simple form where a more complex truth is actually at work. Morgan does this by tracking his threads in such a way that the actors in them come to face the public opinion of themselves, and then reject it not directly but by acting in such a way that their contrary intentions are revealed.

“All liberals are weaklings, and all weaklings are vindictive, mean and petty.” (164)

Morgan presents the heretical Burroughs in raw form as he was, both offensive to mainstream society and unyielding to the wishful thinking of others in the counter-culture who just wanted to space out and join the great vapid. Burroughs exists in this book in a steely-eyed world where every good deed is actually a manipulation, every positive gesture reveals a hidden fear, and the only game in town is power derived through control of others. While Literary Outlaw: The Life and Times of William S. Burroughs is also an excellent literary biography, its primary purpose may be to explicate the ideas of Burroughs by showing us how they influenced events during the author’s life.

The antidote to guilt | The Nationalism FAQ