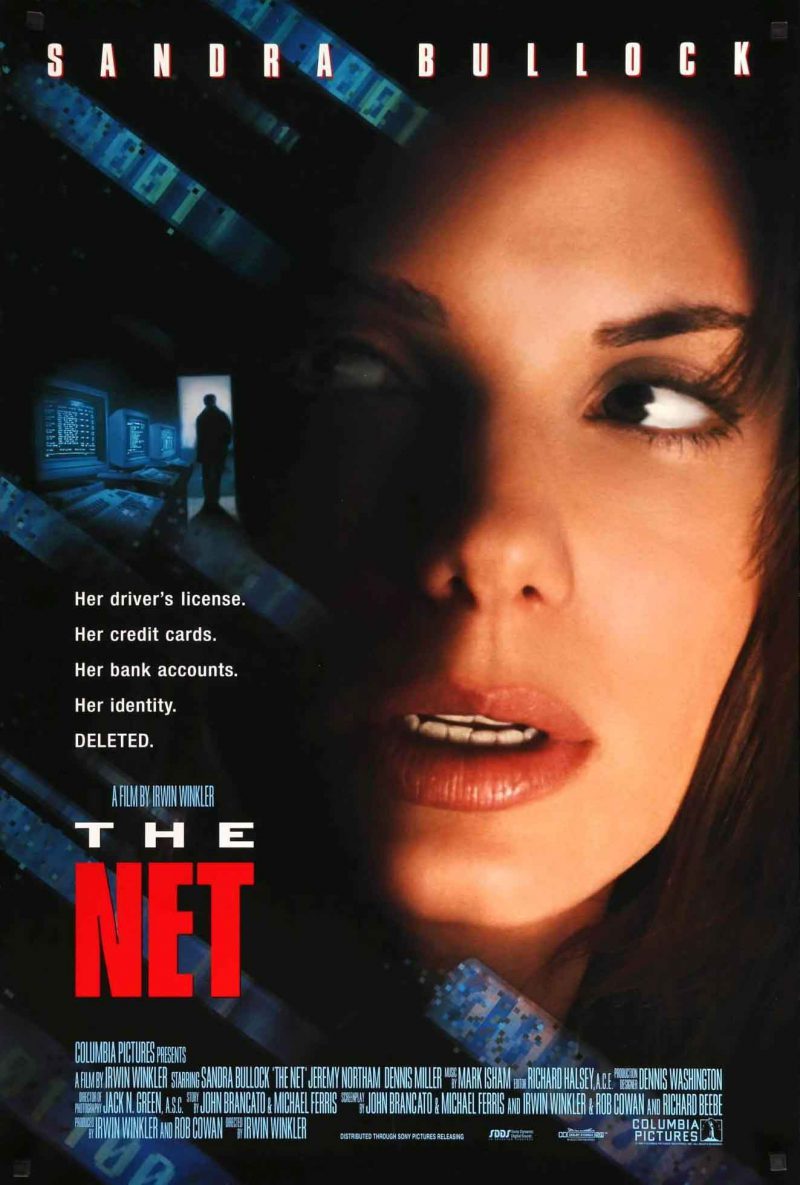 After the fiasco of the 1950s, which was a golden age on the surface concealing deep spiritual rot within, people became distrustful of large corporations. When the internet rose, it seemed at first that it would escape those, but by the early 1990s it had become clear that they would take over.

The Net plays to fears of that corporate takeover: if corporations, which care only about boosting shareholder wealth and are amoral like shotguns, control our data, what can they not do? As riffed on in War Games, Repo Man, and Neuromancer, they can ruin our lives.

The movie begins with corporate security researcher Angela Bennett discovering a strange virus which allows her to get past the security program being adopted by government and industry alike at a fast pace. This means that “who watches the watchers” becomes relevant, because the watchers are corrupt.

We have no shortage of modern metaphors for this. Google censoring results, Dominion changing votes, media determining what is “fake news,” Twitter deplatforming non-conformists, and government proclaiming absolute truths that benefit China all fit within this pattern.

In each case, those appointed to save us from the hackers have turned into a far worse version of the worst black hat hackers out there, stealing our information, making us social pariahs, and controlling mass opinion through coordinated astroturfed information.

Rather sensibly, the script on hand here focuses instead on the conspiracy to adopt a security system called “Gatekeeper” which allows those with the right connections to delete or change any public information. Caught up in this conspiracy by having seen the virus, Bennett finds herself unpersoned.

With her credit cards deleted, traces of her life erased, and law enforcement after her because of her edited arrest record, this plucky hacker must use her skills to turn the tables on the bad guys, all while they are trying to kill her and the well-intentioned police and her fellow citizens try to arrest her.

No wonder the Alt Right loves this movie; we have all lived this, seeing ourselves made into unemployable Google-bombed outcasts for attempting to push democracy back toward sanity and reality, all by people with good intentions or who are just following the rules.

Perhaps this film would rank up there with the best video hacker fiction, but it suffers from a script that was written by committee during the middle third of the movie. It takes Bennett, otherwise completely competent, far too long to figure out what has happened and stop emoting at it.

This basically trashes the movie because instead of embarking on a more circuitous and interesting response, ten minutes of screen time cover her complete response, after the audience has already gone to sleep following thirty-two minutes of thrashing around, crying, and repeated symptoms of unpersoning.

As usual, Sandra Bullock excels as the cute, energetic, well-intentioned, but fundamentally underconfident and socially adrift loner who rises to the occasion by relying on her gut instinct and pluck. She does her best with the waterlogged script and makes it mostly believable.

Especially as we head into an era where we are trying to defeat a mass-control system marketed as our independence from control systems, whether that is bureaucracy or democracy being up to our readers, The Net delivers a timely and terrifying view of what society and technology have together unleashed.

Three Layers Of The Trump Strategy To Save America | Pastoral