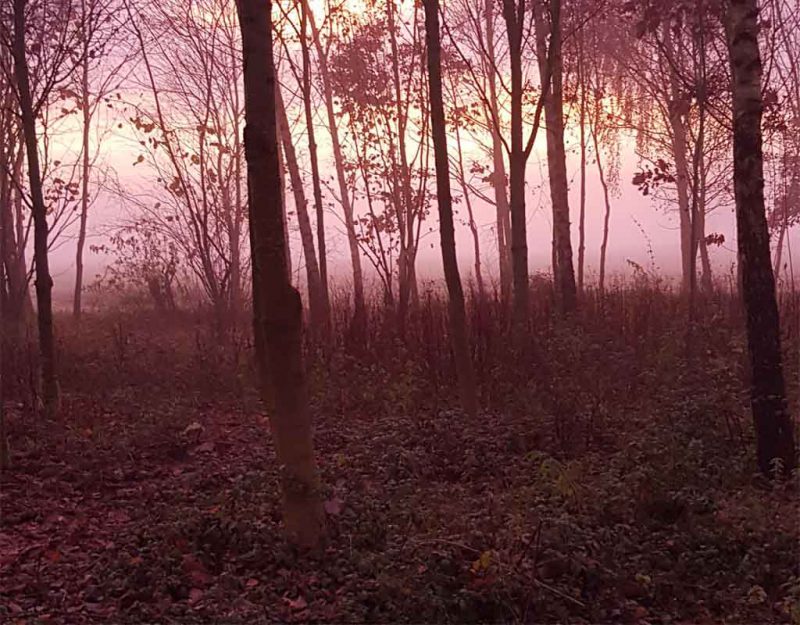 If the Doctor couldn’t help him, Desmond wasn’t sure what he would do. For weeks he could not sleep, but more so he just could not live anymore, going to work and watching the same nonsensical programs on the tele, listening to the drab droll music on the radio and listening to his co-workers and friends alike speak of nothing but the latest movies or gossip. The Doctor was the last person he could turn to now. The Doctor listened to his woes and nodded with a smile.

“I know just the thing.” He said to Desmond’s relief, “Take a weekend, there is a place I know of where you can rent a log cabin and stay near the woods there. I would insist you leave the laptop and cellphone at home, and commit yourself fully to this weekend experience. Come see me next week and tell me how you are feeling then.”

Desmond frowned but knew that the Doctor was very wise and so listened to his advice. He cleared his calendar for the weekend and booked the cabin in the woods for the entirety of Saturday and Sunday. He drove up the very first thing Saturday morning. No one was there to greet him and so he unloaded his luggage and settled nicely inside. Against the doctor’s suggestion he brought his cellphone at the very least, but he left it in the cabin. The sun was shining brightly in the sky, the birds were singing sweet songs to him and the woods looked ever more inviting. After he unpacked he decided to take a trek, wending aimlessly through the forested area. There was no pathway here, so he tried to keep a general sense of where his cabin was but soon he was lost in the wonder of the woods.

A small brook could be heard nearby, the water gurgling softly as it crept over the rocks. Singing rang through the air, not only of the birds but of the bugs as well, all their tones and drones made a sort of music that one could never hear on the radio. The wind whistled through the trees, rustling their branches, sometimes wrenching loose the occasional fruit or seed so that they thudded to the ground below. And the animals were part of the orchestra as well, their chattering, tweeting, hissing, roaring, it all culminated into the music of the forest.

Desmond delved deeper until he came onto a river. A bear stood within, snatching at the water for lunch. Desmond stood by and watched as the bear caught a fish between its paws. It brought it back to the bank and sat down to eat. The man picked up a stick and fished his knife from his pocket and began whittling at it while he watched the bear. Once the beast had finished its lunch it turned around and crept back into the forest. Desmond looked at the pointed end of his stick now and waded down to the riverbank.

His eyes followed the lovely trout that swam beneath the water and with a quick flick of his wrist he plunged his makeshift spear down and struck the riverbed. The fish swam away frightfully and Desmond wrenched his spear to try once more. He stood there for near on an hour striking holes into the riverbank until finally his spear found its mark. He whooped happily as the fish wiggled on the end of the spear. He turned around and brought it back to the shore, but unlike the bear he could not eat this fish raw.

Hours passed as he wandered through the forest, but it did not seem likely that he would find his way back to the cabin before dark. He began to gather tinder for a fire, and found a nice rock to strike. He struck the carbon-steel knife against the sharp edge of the rock again and again. He held it close to the tinder and soon the material was glowing red hot. Desmond watched a lot of documentary series and so he leaned forward and blew gently until finally the fire caught. Joy and warmth washed over him as he placed the fish near the fire. He had done shoddy work at cleaning the fish, and he kept it at the fire for too long, but it was the most wonderful fish he had ever tasted.

Now that he was warm and fed he had to try to get some sleep. At first he was unsure whether he would be able to fall asleep, but the effort from his fishing, starting a fire and cleaning the fish had exhausted him. The soft chirping of the insects and the stillness of the sleeping forest lulled him into a deep slumber. He woke at the break of dawn without the aid of his alarm clock, and what was more he felt perfectly rested and ready to tackle the day. He spent most of his morning trying to trek back to where his cabin was. He worked up a hunger and stopped to pick fruit from a nearby tree. From there the sudden idea struck him, and he began to climb as high as he dared and peered out above the canopy of the forest.

These woods stretched far in every direction, but he spotted the towering head of a telephone pole in the distance. He descended from his perch and made his way back. Soon he found the road which he followed for near on an hour before the cabin loomed ahead. He went inside and checked his phone but saw that there were no messages. Desmond swiped his keys which jangled noisily as he got in his car and made back for the city.

Over the next few days, Desmond always found himself dreaming of the forest. His bed did not seem near as nice as the bed of earth, and the food could never taste as nice as that fish he had caught and cleaned and cook all on his own. Soon his drab and dreary life threatened to undo all that the trip had done, and so he decided he needed another dose of this medicine. This time he was prepared and kept his back always to the cabin. He had a most wonderful weekend at the cabin, but what was more, when he returned he realized it had not been a weekend at all, but he had spent several days longer than he had intended to. But Desmond was filled with such joy of walking the woods and listening to the wonderous sounds they made that he hadn’t kept track of the time he was spending there. And he kept going back, once he had a taste for it, he couldn’t stay away. Soon he started to plant things there; he would simply scatter seeds close to the cabin and let nature take care of the rest. As time passed, he had grown enough crops to last him for a long time.

This would be his final day at work. He was sure of it. Desmond typed up his letter of resignation and placed it on his boss’ desk. His phone, laptop and other electronics he was to leave behind, but there was one thing he might carry with him. On that Friday afternoon after resigning from his job, he asked Arabella if she might fancy the Saturday with him in the cabin. The idea intrigued her and so the next day Desmond and Arabella made their way up to the cabin and never returned to the city again.