Nobody Wants Your Apocalyptic Hate Cult 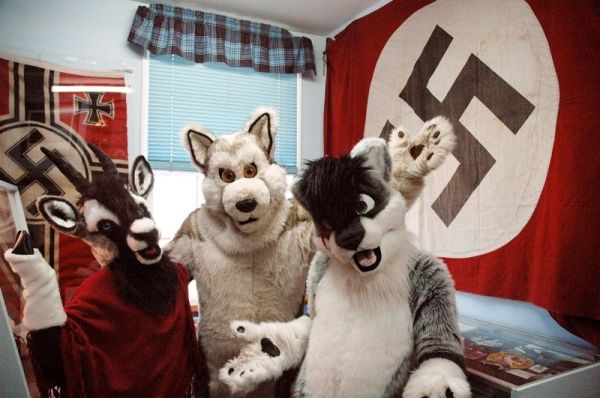 That the white race is in trouble is beyond doubt. Assailed from within by ideological divisions, assailed from without by the majority of the world’s people, who are non-white, whites face extinction. They also of course face the results of technology which they created and, hampered by said internal ideological divisions, unleashed upon the world. These facts are beyond doubt.

What requires more analysis is the response to this. “White Nationalists” seem to like to throw a giant tantrum and retaliate against the world with grand proclamations of war, and of superiority, and of scorn and hatred. They sit around in their little clubhouses and rant out the same propaganda, convincing themselves that if they just wake up enough white people to the imminent doom, everyone across America will join hands, put on swastika armbands and start the slaughter.

Are you laughing yet? Because I am.

That will never work. An emotionally balanced person recognizes first that modern society is a deathmarch, and next that it’s a final trip for “whites,” too. You cannot establish a global republic based on commerce and have it do anything but what commerce does: consume, produce, and trade. This system will in short order consume all of our fossil fuel resources, and then begin eating up everything else. It’s analogous to rats breeding out of control in a cage, and the response will be the same: massive internal warfare.

Most “white” people live in the dream that this isn’t the case. Their world begins and ends with boundaries defined by social thinking and social logic. That this is error is beyond question; however, every person on earth lives somewhat in error and somewhat in function. In order to function, the average citizen of the world has opted to be in error about environmental, cultural, social and racial holocaust of themselves. (They will gladly moan it in others, and send professional armies to intervene, but don’t confuse this with caring – a band-aid and a kiss isn’t caring unless it is part of a daily process of looking after the welfare of someone.)

Those among them that still function as intellects, generally speaking, want nothing to do with emotionally-out-of-control people, because they recognize this emotional unbalance as the source of problems within the “white” race. We are divided internally between those who believe that pleasant emotions and social fictions such as Christian morality dictate what is “real,” and those who point to an ultimate reality composed of physical existence. How many worlds do you see? If you see one, you’re sober. Two, and you’re intoxicated – step out of the car, punk.

“White Nationalists” see two words: the world of the pure and true, and the current world. There are “Aryans,” who can do no wrong, and anyone who is “Aryan” is automatically better than everyone else and worth saving. There is the Official Doctrine, and if you don’t buy into it, you’re the enemy – probably a fucking Jew. They believe that if the Official Doctrine were made mandatory, suddenly everything would be OK.

I have news for such people: no one who has succeeded in life will buy that crap for very long. You will fool many, including many of great intelligence, because the germ of the message – that the “white” race is under assault – is true. The response suggested by the Official Doctrine is moronic, however: violence for its own sake, vast purges and a bureaucratic government enforcing racial purity. I’ve got news for you.

First, you’re outnumbered, and your own race has given the “enemy” weapons. You will not win.

Second, most people, myself included, don’t want to engage in a campaign of hatred. We’re fine with eliminating anti-discrimination law and bias in media, and even with isolating ourselves from other races, but we’re not going to play with the “let’s go crush all Negroes because they’re inherently stupid, worthless, and criminal.” That may be true of the population as a whole, but we all have Negroes about which we care. So the militaristic crush them all approach is a loser with us.

Finally, you don’t eliminate the problem. The values of the white race will still be rotten, which means that the next evolution of the problem will involve whites slaughtering each other for the sake of internal ideological disagreements.

Most people are vastly ignorant and poorly bred. Mixtures of caste, race and background have produced people of a lowest common denominator, who can agree on sports and television and movies and music, but not much else, and are swayed by the simplest argument presented to them. Therefore, they in every case opt for the most simplistic and idiotic solution to any problem. The “white nationalist” approach is not to change this basic tendency, but to play into it.

I’m not interested in saving the world, or saving “the white race”; I’m interested in solving the ideological split among white people (because this is my race, and for no other reason; were I black, I wouldn’t give a damn at all and it wouldn’t be any of my business; hence, I have the same disinterest in the black race) and in nurturing and giving power to those “white” people who have brains, strength, character and moral leadership ability. Most of you, including the squareskulls who hang around “White Nationalist” outfits, I don’t care about saving or even aiding.

There are some other idiots who reject “white nationalism” and talk about the importance of some “new future movement” but these people are just as stupid: they don’t realize that no new answers are needed, because the answers never change regarding the biggest questions in life. Technology changes; what PDA do I use? But questions of culture, breeding, education and character never do and never will. Nothing will ever change the basic parameters of mortality and thus, a certain amount to accomplish before death, and certain behaviors that are ascendant and others that bring one closer to the lowest common denominator.

The “new future movement” people are finding excuses for inaction, because their Official Doctrine posits that until this “new future doctrine” arrives, they should do nothing except what gratifies them personally. Clearly, they’re even stupider than the “White Nationalists,” but it’s by a hair. I don’t need to mention here that “liberals” and “conservatives” don’t even make it to the stupid-smart scale, because for them, ideology is a question of self-image and purchasing power, which makes them products of the current society and unable to see beyond it.

Yes, our world civilization is collapsing. It’s not peak oil, or global warming, or nuclear weapons that will do us in; those are symptoms of a greedy, neurotic, oblivious society run out of control, much as a dirty house and disorganized life as symptoms of personal degeneracy. The solution is not to try to find a more aggressive politic in the style of what is already known, but to work outside of the confines of narrow social definition and to assert the commonsense moral values that made civilizations in the past great.

We don’t need anything new. We need to stop avoiding the problem, and fix it: our values are garbage, and they are that way because in our rush to find convenience through the implements of society, we have stopped valuing self-discipline. One symptom of this, Christianity, encouraged us to think of the world in binary good/evil terms, borrowing from a perfect world for validation of these, and this has in turn made people slaves to an emotional flight toward good and from evil, wherever they can find these. And leaving ignorant people to their own devices to find absolute “good” and “evil”? Comedy results.

The cultlike aspects of White Nationalism are its downfall. Instead of withdrawing from society into a clubhouse where we can preach to the converted, what we must do is subvert mainstream philosophy to our ideals – in part by broadening our ideals from race alone. The environment rots, we serve in mindless and unnecessary bureacratic jobs, our sexual and breeding habits are slovenly, and we live by convenience and money alone – we have no values system because it offends our self-image as independent, “free,” etc. to do so. And thus we construct our own prison.

Until we fix our values and get moving to fix civilization, the doom of the white race, and humanity, will continue its inexorable march toward us while we sit paralyzed by our inability to think outside of the prison that constrains us. You cannot make a better version of the prison, but must escape it before the clock runs out and death finds you helpless – and feasts. No matter what our brave and violent rhetoric, if we allow this to kill us, it is justice and a chance for a better species to take hold.