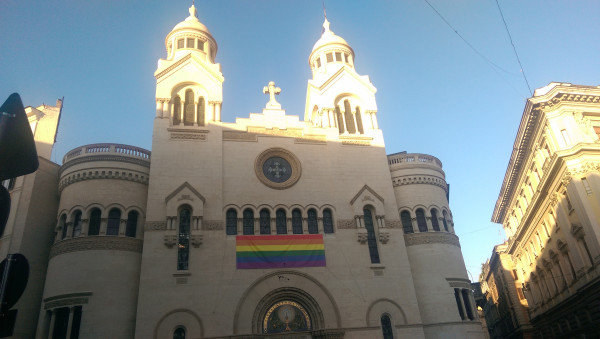 You know the score: you’re hanging with some friends, the night is winding down and groups have separated, so a few pull away from the eternal kitchen confab (kitchens are, apparently, the place for candid dialogue in modern society) and plump up the sofa for some video entertainment. “Let’s try a foreign film someone says,” and you, camping out to rest those feet for a few before checking out the porch scene, groan inwardly and think, I hope to forsaken gods that it’s not British.

Oh, but it is. “Look, it’s a bomb,” mutters the disillusioned-and-so-realistic detective. “No, it’s macaroons! The package says macaroons!” nasals the authority figure protagonist. Huge explosion, ceremonial gardens ruined. Someone actually does groan, which stirs you out of mentally composing Why I Hate British Cinema: An Ongoing Meditation (Book 71). These characters are plastic cut-outs, heck, the whole society seems to be.

To Americans, British people in television and film seem to be so nerdly and useless we can barely watch to the halfway point as they struggle with the obvious. Things aren’t what they appear to be, so we have to go talk to everyone who vociferously insists they are, and finally a crack appears, and the mystery unravels and it’s time for tea and another endless talky scene to make sure we understood that, in this movie, things are as they appear to be. Americans can’t believe how proper, how stodgy, and how endlessly nerdly the British seem to be.

What is it about nerds and the British that make them almost conflatable? If we fall into the trap of the movie, we try to look at their external appearances and derive formulas based on clothing, tea, prancing gaits and pinchy-nosed dialects. But really it’s the outlook on life that sees reality as even divided into square blocks, equals signs, and paths of proper behavior from which deviation cannot occur. Nerds get sand pushed in their face by jocks because a true nerd never quite gets it; he’s always trying to take something or another at face value, and so confronts reality with an awkward akimbo mentality that makes us all inwardly shudder.

If you ever wonder why software sucks, and most of it really does once you push it beyond the most standard use cases, you see this mentality in action. There is a specification, which in order to communicate between people, makes generalizations and then makes rules based upon them. Then they pass it to nerds, who generally use computers for nothing but nerd-tasks, in which there is always an archetype and a response in the code. These then create software that works great if you use it in laboratory-conditions isolation with perfect data, which almost never occurs in the real world.

They are afflicted further by marketing types, who whether the software firm is for-profit or not, want to promise everything to everyone, because if The People see it says it can do something on the box, they buy it — they want their macaroons to be XML-compliant. So features creep in, and nerds plop them into the software, without concern for the ecosystem formed of operating system, other stuff running on the computer, and the user. They ship it out to the world, crashes occur, and phone support people are left to tell us that they “didn’t consider that situation.”

Nerdism (and Britishdom) if you look at it carefully is a product of the modern mentality of “ground-up” construction. Ground-up is the idea that you make little parts interact, and then an order forms itself. People love ground-up construction because it is the fastest and easiest way to answer that one question or demand, right now, without having to fix integral problems with the ecosystem in which they’re building. The principle of ground-up construction is that you ignore the ecosystem, and you ignore all consequences beyond the immediate a + b = c of your plan, so that you deal with the smallest set of data and let the system build itself.

This idea gets applied universally. In literature, it’s the workshop method: you start with a character, invent one aspect of a scenario, and let the interaction between character and scene create a story. In software, you reduce your problem to the simplest set of use cases, build categories and build objects to address it. In society, you find a popular consensus on a problem and create a bureau to handle it. All of these responses work great, if we only look at the problem in that arbitrary form of abstraction which removes context; once we open our eyes to reality, and look at the whole, we see we’re creating rigid rules that contradict each other and ensure that our nerdly, proper solutions clash with reality in a collision between tangibly solid, square thoughts and an organic, gritty reality.

Nerdism is one of those great emergent properties of life that doesn’t happen, if we supposed life took itself as face value, with the creation of a law or a social policy. It’s a mirror of society itself. Nerds get it first because they are shaped by the machines they use, and can either struggle mentally against the disorganization or accept it and succeed; the British are infected by the class conflict of their small island and the desire for social climbing it creates. When society wants to destroy its elites, it first creates false elites through external appearance. They, and everyone else who wants to succeed, behave rigidly according to that appearance.

These two groups are similar because they are both people who have adapted to rigid social constructs which reward ground-up construction because they fear leaders. Technology grows rapidly when there are only a few loose standards, and then rapidly diverges into many incompatible standards, until some massive force like Microsoft unifies it through smart business logic. Then that big force itself becomes confused, because its goal has occurred, so it seems defunct, but now as market leader must spend more time defending itself — and there are many attackers, and one defender. Rome in the burning mist? Nerds succeed by acting like this situation and not pointing out its many flaws, because you make more profit by lying about a product than by pointing out what it can’t do.

In the UK, similarly, a populist rebellion took over the country through politics and created an environment where anyone could be whoever they appeared to be, and so acting properly, and having the right nasal accent and correct method of pinching your scones as you daintily munch them, superseded having a clue about reality outside of these social constraints. In both technology and the UK, a consensual reality based on the appearance of life to a disorganized group of others emerged because of this ground-up construction. Say what you want about the caprice of kings, but they are good at setting goals and standards.

The consequences of this mentality of ground-up construction (not design) for both nerds and the British has been a waste of their best energies. They follow a society that itself is following a notion based on the appearance, and not actual use, of its products; they have marketed themselves into oblivion and now find it hard to reconnect with reality. This is why societies go through spasms of revolution in 1968 or with the open-source movement: people are aware that reality is far away, but have no idea to reconnect with it because, like revolutionaries, they know they want something different but use the methods of the past and so arrive at their own version of the past, not a new society.

Of course, with humanity there’s a catch, and that is that we listen to each other and in a flexible society where everyone is competing to be popular, get rich and retire, it’s hard to find any thought-leaders. Even worse, because thoughts that are unpopular get smashed down, most thought leaders stay very quiet, until you get blatant suicides like Jesus who are so frustrated with the tedium they’d rather die as a big middle finger on a cross. Ground-up construction is popular, unlike top-down design which requires a consensus and hard work to make every part of the system work together, because it is accessible to everyone.

However, since ground-up construction works with the rigid square boxes of one problem at a time, it inevitably causes chaos, which in turn strengthens the governments and corporations who remove that chaos through blind illogical (and profitable) force. Freedom makes oppression, because freedom creates pleasant illusion which creates problems that require oppressors. We as individuals are our own worst enemy when we are interpreted through the filter of many individuals at once trying to agree on some order (like “freedom” and other ground-up constructions) that will protect us individually.

None of us like the cruelty of jocks, and in this country, jocks are generally idiots who are oblivious to everything but the social pecking order. Yet in us as we grow frustrated there’s something of this mentality, which is an urge to smash every bureaucrat and marketer who tells us that a turd is a macaroon and we’d better like it or we’ll end up in the jobless line. These people are acting innocently to advance themselves, but the order that permits that advancement is destructive, and until we create a contrary impulse by smashing a few faces, it’s going to ride us until we quite properly die wondering why the macaroons are ticking.