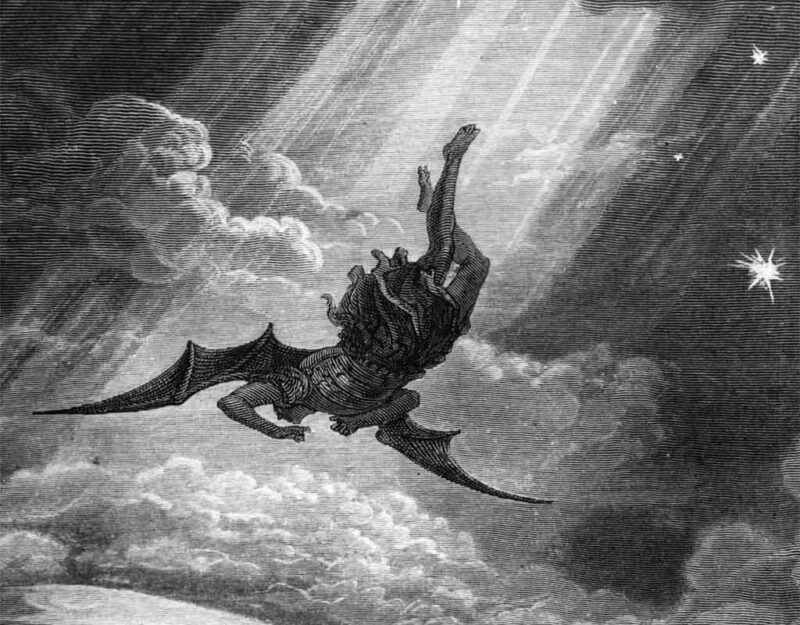 In the first vision of Satan, we see the rebel angel as an icon of individualism. When asked to swallow his pride, he rejected the order of Heaven for one of himself and was thrown out of that divine place, falling to a lesser place which he made his own.

Satan in this telling more resembles the lords of the Greco-Roman underworld than a demon. They, too, ruled desolate places, although in that vision purgatory, Heaven, and Hell are combined into a kind of anteroom to reincarnation.

This Satan strikes us as a lot like Captain Ahab, King Herod, or Adam in the Garden of Eden. That is, he is rife with hubris and because of this overflowing of individualism, makes an idiotic decision and then rationalizes it by saying that he won because he alone has control.

In this telling, Satan is as bratty as your average Instagram e-thot, rambling on how he will do the exact opposite of God, since he is going to be a teenage rebel forever (Satan was… a Boomer?). It reeks of justification and preemptive defensive self-validation, this brat-Satan:

Whereto with speedy words th’ Arch-Fiend replied:—
“Fallen Cherub, to be weak is miserable,
Doing or suffering: but of this be sure—
To do aught good never will be our task,
But ever to do ill our sole delight,
As being the contrary to his high will
Whom we resist. If then his providence
Out of our evil seek to bring forth good,
Our labour must be to pervert that end,
And out of good still to find means of evil;
Which ofttimes may succeed so as perhaps
Shall grieve him, if I fail not, and disturb
His inmost counsels from their destined aim.
But see! the angry Victor hath recalled
His ministers of vengeance and pursuit
Back to the gates of Heaven: the sulphurous hail,
Shot after us in storm, o’erblown hath laid
The fiery surge that from the precipice
Of Heaven received us falling; and the thunder,
Winged with red lightning and impetuous rage,
Perhaps hath spent his shafts, and ceases now
To bellow through the vast and boundless Deep.
Let us not slip th’ occasion, whether scorn
Or satiate fury yield it from our Foe.
Seest thou yon dreary plain, forlorn and wild,
The seat of desolation, void of light,
Save what the glimmering of these livid flames
Casts pale and dreadful? Thither let us tend
From off the tossing of these fiery waves;
There rest, if any rest can harbour there;
And, re-assembling our afflicted powers,
Consult how we may henceforth most offend
Our enemy, our own loss how repair,
How overcome this dire calamity,
What reinforcement we may gain from hope,
If not, what resolution from despair.”
Thus Satan, talking to his nearest mate,
With head uplift above the wave, and eyes
That sparkling blazed; his other parts besides
Prone on the flood, extended long and large,
Lay floating many a rood, in bulk as huge
As whom the fables name of monstrous size,
Titanian or Earth-born, that warred on Jove,
Briareos or Typhon, whom the den
By ancient Tarsus held, or that sea-beast
Leviathan, which God of all his works
Created hugest that swim th’ ocean-stream.
Him, haply slumbering on the Norway foam,
The pilot of some small night-foundered skiff,
Deeming some island, oft, as seamen tell,
With fixed anchor in his scaly rind,
Moors by his side under the lee, while night
Invests the sea, and wished morn delays.
So stretched out huge in length the Arch-fiend lay,
Chained on the burning lake; nor ever thence
Had risen, or heaved his head, but that the will
And high permission of all-ruling Heaven
Left him at large to his own dark designs,
That with reiterated crimes he might
Heap on himself damnation, while he sought
Evil to others, and enraged might see
How all his malice served but to bring forth
Infinite goodness, grace, and mercy, shewn
On Man by him seduced, but on himself
Treble confusion, wrath, and vengeance poured.
Forthwith upright he rears from off the pool
His mighty stature; on each hand the flames
Driven backward slope their pointing spires, and rolled
In billows, leave i’ th’ midst a horrid vale.
Then with expanded wings he steers his flight
Aloft, incumbent on the dusky air,
That felt unusual weight; till on dry land
He lights—if it were land that ever burned
With solid, as the lake with liquid fire,
And such appeared in hue as when the force
Of subterranean wind transports a hill
Torn from Pelorus, or the shattered side
Of thundering Etna, whose combustible
And fuelled entrails, thence conceiving fire,
Sublimed with mineral fury, aid the winds,
And leave a singed bottom all involved
With stench and smoke. Such resting found the sole
Of unblest feet. Him followed his next mate;
Both glorying to have scaped the Stygian flood
As gods, and by their own recovered strength,
Not by the sufferance of supernal Power.
“Is this the region, this the soil, the clime,”
Said then the lost Archangel, “this the seat
That we must change for Heaven?—this mournful gloom
For that celestial light? Be it so, since he
Who now is sovereign can dispose and bid
What shall be right: farthest from him is best
Whom reason hath equalled, force hath made supreme
Above his equals. Farewell, happy fields,
Where joy for ever dwells! Hail, horrors! hail,
Infernal world! and thou, profoundest Hell,
Receive thy new possessor—one who brings
A mind not to be changed by place or time.
The mind is its own place, and in itself
Can make a Heaven of Hell, a Hell of Heaven.
What matter where, if I be still the same,
And what I should be, all but less than he
Whom thunder hath made greater? Here at least
We shall be free; th’ Almighty hath not built
Here for his envy, will not drive us hence:
Here we may reign secure; and, in my choice,
To reign is worth ambition, though in Hell:
Better to reign in Hell than serve in Heaven.
But wherefore let we then our faithful friends,
Th’ associates and co-partners of our loss,
Lie thus astonished on th’ oblivious pool,
And call them not to share with us their part
In this unhappy mansion, or once more
With rallied arms to try what may be yet
Regained in Heaven, or what more lost in Hell?”

With another glance, this looks a lot like the American revolution. We may be living in a far-off land, cut off from friends and family, but “we shall be free” and may “reign secure” since only ambition for the self — hubris incarnate — is sufficient for his happiness.

If you flip it around, this reads as utilitarianism. They may be in Hell, true, but they are happy because they have cherry-picked one factor (freedom) of many and made it into their new god. Obviously their Revolution was as much a stunner as the French and Bolshevik versions!

We can see why Satan is referred to as the Lord of this world, in that in a fallen land, only Satan has dominion, since all of us have nothing to compensate for our lack of holiness except freedom and Will. However, even that rings hollow. Here we have no such things, even.

Nor do we have any reason to believe that holiness exists outside of this world, only that it is not “pure” in the human sense of having no cause-effect relationship or anchor in time. Holiness for us consists of seeing the reason for things and the beauty of them, and enhancing it.

This takes us to the second vision of Satan.

In this one, the Christian scribes borrowed more from the legend of Prometheus, who stole fire from the gods for humans and was punished extensively for it, than from those of the Land of the Dead. This Satan brings wisdom even if accidental.

The second telling of Satan spins a tale of a Heaven based on an illusion of perfection, purity, safety, and in short, a lack of all of the things that keep life dangerous and interesting. God is an imposition of an absolute in a relative universe and becomes corrupted instantly in this view.

After all, in a place where you know hot by cold, and three by its difference from the other nine numbers, the idea of an absolute imposes an inflexibility and reeks of control. Those who want you to deny reality and the logic for its differences seem threatening in this telling.

Here, inverting the Garden of Eden which came later, Satan strikes us as neither Ahab nor Frankenstein, but a type of Paul Revere. He sees the impossibility of Heaven and realizes that this makes it not only unstable but manipulative, like Stalin, Mao, the Khan, or Hitler.

He brings to the creatures of this world the knowledge that God is the form of hubris, an attempt to stop time and space, to remove risk from reward, and otherwise, a kind of moral socialism where all are collectively rewarded for obedience but no one must change, adapt, or adjust their thinking.

That takes us to dual visions of God.

In the first, God is the provider of all that is good, and the world is bad. It is so bad that being here is like being Satan cast into Hell, basically a lesser state where nothing is good and we are ultimately doomed.

That interpretation gives room for nothing but obedience and in the process, rejection of this evil fallen world so that you may embrace the next.

However, this view possesses the duality of the Promethean Satan. That is, any possibility of holiness here creates a kind of spiritual freedom where one is unbound from promises of the future and able to experience a slice of divinity on Earth.

Viewing God as an antithesis of this world in turn makes Satan not only necessary, but good.

On the other hand, the second vision of God shows us a continuation of all that is good here. We can participate in degrees of holiness in this world by making our minds like the order of God, and to deny this like Satan is to enslave ourselves to a castoff wasteland of the hubris-laden ego.

This places the onus on us to avoid falling into decay by being unrealistic, instead of encouraging us to be unrealistic in order to be obedient. In this view, Satan is merely disorganized and incompetent, falling from Heaven by lack of mental discipline, then rationalizing his fate as good.

In this view, what threatens us is not our vision of Satan, who is basically the default, but an inability to see God and his presence in this world.

Does this apply to politics? Most certainly. Fear of the first Satan creates an unrealistic model of good based on hatred of this world, like the “equality” and “altruism” of the French and Bolshevik revolutions.

On the other hand, embracing the second view of God shows us that we are not here to bang Bibles, tout platitudes, and browbeat non-conformists. Instead, we are here to discover the beauties of this world and enhance them in reality, not merely in a symbolic world in our head.

Perhaps Satan is best interpreted as the Greeks saw their mythic figures: doomed, yet useful, in the process of advancing human knowledge so that, while not being gods, we can behave more like the order of good and in doing so, cleanse our souls of the confusion that makes us do “evil.”