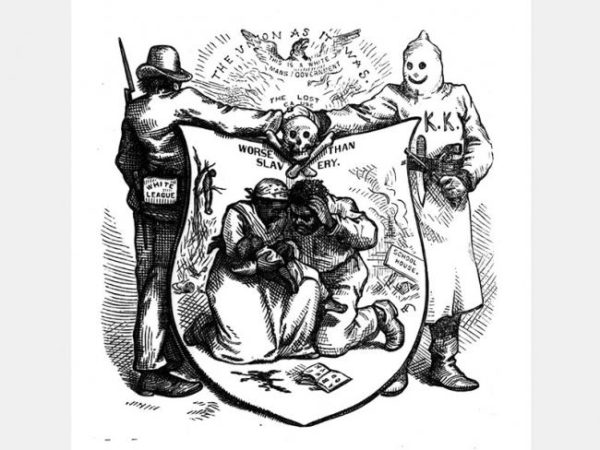 There is something hardwired in all of us that rages when we see a member of another Tribe acting defiant amongst us.

In this we find the origin of the Uppity Negro trope that afflicts the South: if someone is not of our Tribe, his duty is to act deferential and respectful, but if he starts acting jubilant and mocking us… then we know there is a problem.

The reason for this is as old as human evolution, and it has little to do with African-Americans, and everything to do with the fact of the Other. If someone is Other, and he is acting jaunty among us, it means we are conquered. Beaten. Unable to do anything. Cucked.

Much of the dark side of American history could have been avoided if this principle had been articulated. When among those of another tribe, behave respectfully. And yet, diversity did not allow this.

The fundamental principle of Nationalism is this: each Tribe acts in self-interest, and those self-interests are not compatible. Every group works toward its advantage, which is that it rises above others by pressing them down and raising itself up.

This knowledge is the origin of the Uppity Negro myth. Anyone from another Tribe who acts jubilant is celebrating a victory over the tribe around him. He has forced them to bow before him, and whether from their own neurosis or his military prowess, they are subservient to him.

This is why the presence of happy people from other Tribes drives people nuts. If a Hispanic man sees a celebratory African-American, his primal instinct calls for him to exterminate the Other. Same if an Oriental Asian sees an Arab or Indian. Or any combination thereof.

Diversity does not work at all. It interrupts power structures, and presents us with people who by their assertion of their own Tribal identity make us want to murder them, and every other tribe want to murder them and us. This is why violence erupts at random in diverse communities.

The solution, as always, is not so much “do this difficult thing” as “stop doing this insane thing.” But that is too much for the individualistic society because it denies the presence of anything above the individual — God, nature, Tribe, values, logic — and admitting the failure of diversity thus threatens the individual.

However, the fundamental fact does not change because we cannot articulate it. A happy member of another Tribe appears “uppity” to us, and we want to kill him, independent of his Tribe and who he is. It is simple evolutionary wiring.

In the past and present of humanity, each tribe has had a singular goal: break away. Only by removing itself from all Others and pursuing its own goals can it establish a standard to replace natural selection, and by so doing refine its population to be unified in characteristics. In other words, a sub-species.

When we think through all of this, it becomes clear that the Uppity Negro trope is not about African-Americans at all. It is about how diversity does not work, and how we need our own space, whatever our tribe. It is about the ability to pursue our destiny, which is better than freedom in any age.