The future of the Republican party

The future of the Republican party lies not in trying to emulate Democrats, but appealing to the anti-entitlement middle classes.

Obamacare passes, and the wires burn up with directionless bloviation about how this is the end for Republicans and the Republican party must change.

While it’d be nice to think we’re cheering for one of two football teams, and thus everything they do is fair play, that’s not reality. What’s true is that Republicans must change, but not in a way any of the blowhards have suggested. 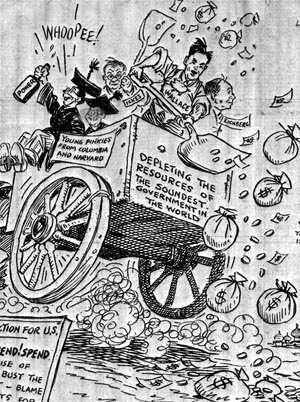 This country is divided between city folk who make their money shuffling papers, designing web sites and writing press releases, and the urban and suburban people who work more directly with industry, agriculture and the military. Urban folk often look down on these people, but not all of them. Just what we might call the “artisan” class of people who get paid middle-class wages to move symbols around on computers.

The artisans want us to go closer to a European socialist system, even as Europe is finding out that it cannot subsidize its lower performers, and that its imported labor force remains impoverished, alienated and violently opposed to the mainstream. So instead of thinking backward, and surmising that Europe’s success is due to its socialized medicine, liberal immigration policies and state-subsidized living, we should think critically and realize that Europe was always wealthy, and it’s even more possible that European socialism is busy burning off that wealth.

But even more than economics, this is a values split. The right is in favor of Social Darwinism that rewards the competent, because they see incompetence and individual immorality as the biggest threats to humanity. The left is in favor of Socialism and tolerance that includes everyone, because they see unsociable, misanthropic and elitist thoughts as the biggest threat to humanity. We can tell which group transcended getting bullied in grade school, and which group is still stuck in that moment.

The right recognizes that without this foundation in values, our productive middle class disappears. It disappears into moral relativism, where people start doing what is convenient and therefore wreck their families through drug use, casual sex, lack of moral center and unwillingness to strive for a higher quality of individual. It also disappears economically, because socialism will effect a “wealth transfer” from the middle class to the urban poor. (The ultra-rich will ride this out as they always do: most of their money is on paper because it is holdings of companies and futures.)

At this point, we’re at a quandary. The left has made itself quite an electorate, first by importing voters and next by implementing disastrous social policies that have produced an army of over-educated, under-employed, mentally dysfunctional people who are looking for someone to blame — as a justification for getting a handout. These people live by pity. They pity themselves, and feel they deserve more than they have, and they pity others like in Haiti and during Katrina, and think all of us should drop what we’re doing to help them.

In the meantime, back in realityland, biology marches on. The intelligent and motivated rise and the self-pitying and less intelligent fall into poverty. It has been this way since the dawn of time. The right supports evolution, or not-pitying, but the left wants to turn back the clock and stop evolution — probably because they feel personally threatened by it.

So how should the Republicans remake themselves? Most people, because they have short attention spans, are clamoring for Republicans to become more like the Democrats. More tolerance! More metrosexuality! More entitlements! Less war and moral judgment. But then that makes for us two identical parties, one of which (the Ds) will always promise more entitlements than the other. Guess which is going to win with that large, disenfranchised, self-pitying audience?

As the Tea Party shows us, Middle America has awakened emotionally — the political theory lags behind, but they’re getting there, having been busy with jobs, family, hobbies and churches to study the reams of deliberately baffling and arbitrary political theory our species has generated. They know they don’t like socialism. What they’re really saying is they don’t like entitlements, and they don’t like relativistic moral standards, because these two related concepts are death to the productive, constructive and morally-minded middle class which has always been the source of America’s wealth.

Republicans need to return to conservative values, not become Democrats. Here’s a brief summary for you:

Republicans need to become the party of the middle classes here in America. These are the people who have always supported the Right not because they’re ideologues, but because they’re self-sufficient. They don’t need handouts. They’re busy and want to get rid of threats to stable communities and family-oriented, morally-centered living. They know that agriculture, business and the military are honorable and necessary careers. They would do just fine if their TVs and video games went away.

The Libertarian revolution and the Tea Party movement are America’s middle classes saying they are tired of being parasitized by anyone who claims to be oppressed, poor, misunderstood or left out. Set up a level playing field and let us live as we please. And instead of inventing new make-work programs for bureaucrats, based on political correctness, don’t forget who is the goose you’ll kill to get the golden eggs — the productive, independent, hard-working American middle classes.