At some point, when the noise to gain ratio is so heavily on the noise side of the scale, for us fallible humans, gain discernment becomes impossible.

An ad for $13.99 toilet plungers just blends in to the optical background ambience of 30 other ads within our field of view. As a result, we never distinguish Pete’s plungers from Margaret’s $8.99 margarita mix.

It’s all a wall of badly contrasting, incoherent optical ambience we reflexively shove to the back burner of our immediate awareness. If you regularly travel to non-rural places for business or as a consumer, or regularly use electronic media, you already know what I’m driving at.

Outdoor advertising has experienced such a phenomenal growth that some downtown cores resemble the not-so-far-fetched city blocks out of the film Blade Runner. At the sides of major highways, in washrooms and even permanently etched into skin, advertisers and their agencies are on a constant lookout for innovative, and sometimes shocking, ways to get their message to you.

â€œThe ad agencies keep fighting against each other, making more and more and larger and larger ads,â€ Dave Meslin of the Toronto Public Space Committee says. â€œBut no one is buying.â€

People seem to appreciate the coherent information they planned to tune into. They shun irritating interruptions and confusing sensory clutter. The former aids our pleasure or survival. The latter just gets in the way.

And even though the audience for broadcast radio is actually growing, stations cannot seem to increase their revenue.

Radio advertising was down 10 percent last month from October 2007, according to the Radio Advertising Bureau, the 18th consecutive month of declines. 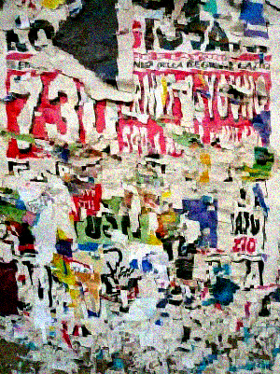 Most of us understand the idea of noise pollution. Optical pollution is no different. It’s probably worse. If we are primarily visual creatures as natural senses go, trashing our visual environment demands attention as well.

Marketing oversaturation along with other overt forms of modern blight heightens our antipathy reactions to our own shared public spaces. At least some segment of the population who are visually oriented with discernment in taste will avoid such spaces, leaving those less perceptive and careless about their surroundings as regulars.

Which segment likely has money to spend and which is likely lower class?

Retreating from one failing venue to the next, the mindless corporate marketing herd stampedes to another niche, oversaturates it, devaluing its time and space as a data distribution node.

One newspaper after another is going out of business across the United States, and the ad revenues of traditional print media, even of highly respected magazines, is declining. The ultimate failure of broadcast media advertising is likewise becoming clear.

Pushing a message at a potential customer when it has not been requested and when the consumer is in the midst of something else on the net, will fail as a major revenue source for most internet sites. This is particularly true when the consumer knows that the sponsor of the ad has paid to have this information, which was verified by no one, thrust at him.

When done right, one sign can help us orient our bearings or offer helpful advice. But twelve signs are a nuisance when they point us in twenty directions, none of which lead to where we had planned to go.

If we started as hunter-gatherers, wouldn’t it make sense to let us mostly forage on our own for what we seek? Advertisement overkill hits us with the opposite: our products probably aren’t what you wanted, so waste your limited time to let us tell you where you can find them.

This translated into a 21 percent lower risk of depression. The effect was strongest among children under the age of 12.