To the human being, our world seems to be divided into two hemispheres: the physical and the mental. However, the nature of this division is foreign to us, even after the rise and fall of several civilizations from which we can draw experience. We still are unsure as to how such a division can exist. Almost every action we commit is rooted within our pathology, which is a method of interaction we create after observing the world and analyzing what we observe. Also, this division undergoes a sort of mitosis when we begin to base our pathology not upon immediate physical stimuli, but the idea of oncoming physical stimuli, or even the pathology of other human beings. 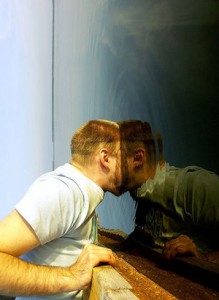 Repeating a key point, we create pathology in order to determine how to interact with physical stimuli. The goal of pathology is to create a desired outcome. Where error often occurs is not misuse of the material through which we create this outcome, but the congruency of the desired outcome with the mechanics of the system within which the outcome arises.

Because of this, human beings began to form their thought processes around how they wanted to think, or how they hoped to view themselves in order that others view them in a similar manner. This fulfillment of an idea has become top priority in the minds of almost every person alive today; disregarding those who reside in third world countries.

The entire structure of our society revolves around how we sell ourselves to each other, because, frankly, we have no time for other things. Functionally we have reduced any danger in obtaining the basic needs for survival, and from there, unable to determine a greater use of our time; we used our technological prowess to pursue satisfying our emotional needs.

Of course, the emotional needs of individuals often come into conflict. When someone attaches themselves to an appearance that they wish others to accept then they in turn become threatened when that appearanceâ€™s validity, or approval from others, is threatened. This most often comes in the form of another individual attempting to prove the validity of his appearance by disproving the validity of anotherâ€™s, and it often leads to infighting, depression, doubt, and a lack of confidence. When a personâ€™s mind is afflicted by these feelings, they are unlikely to identify the positive within the world around them, and work with it, due to a greater desire to focus on the self. Consensually, this alters the entire direction of a society. And what are most peopleâ€™s minds afflicted with today?

That means that one in four people that you meet everyday has a co-opted mind; a thought-process interrupted by their inability to cope with the perception of those around them. This often results in a need to create an alternate symbol of focus that is akin to frenzy. People have reduced the ability to functionally analyze the world to simply ensuring that the basic survival needs of everyone are met, and this creates a purpose for society for a small period of time.

But as technology advances, and we become more and more able to meet these needs for a greater number of people, what will be left on our hands to occupy our time with? Error arises from an incongruousness of oneâ€™s perception with the environment that surrounds them, and it seems that the more we fervently attempt to reduce the interaction of people with the dangers of their environment around them, the more likely they are to spend their time creating social symbols to place a greater focus on than reality.

The possibility of using our functional analysis of the world to create ever greater purpose and levels of achievement for our people has been road-blocked by our intense focus on the self. Creating such purpose demands standards, and demands a physical reaction to an ideal. This is dangerous to the ongoing battle of the self to assert their appearance over others, as they would have to take a break from constructing their social symbols to meeting the needs of these goals. This is why such a great division is created between traditional and modern pathology.

Whereas the goal of traditional logic was to create a life worth living by analyzing every facet of reality in order to place them within a path of achievement, the goal of modern logic is to eliminate all obstacles in the way of the selfâ€™s relentless promotion of the self. This has done away with our only methods of evaluation: standards and expectations. We have exchanges such things for preference, and preference, being only relevant to the self and those who approve of that individual, is completely arbitrary.

All human beings must bear this burden of wandering aimlessly throughout the void, and as a result the little boats of intellect that are the greatest minds have also gone astray. We are trapped within a hall of mirrors, and even the greatest stars discover themselves in the looking glass.