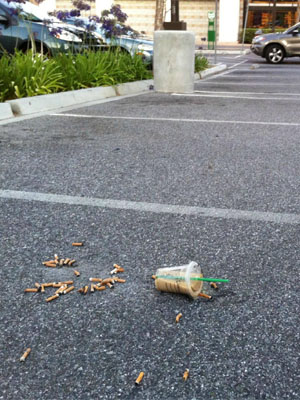 How to cook up a brat: suspend your child between doubt and luxury.

When you think about it, our society does this to all of its children — and all of its adults. We create them and keep them between two prongs of opposite intensities.

The first prong is obedience. We show them there is only one way to succeed. It’s not doing the right thing, it’s not fulfilling the goal of anything. It’s making money by flattering others and playing the social game.

The second prong is permissiveness. We tell them they are free, and that relativistic judgment is applied. This means that no matter what crazy stuff they do, their score will always be adjusted based on whatever they have suffered. There’s always a way out, for those who have some claim to pain.

The result is a nation of spoiled people. Infantilized, dependent on the parent (popularity/money/votes). And yet hedonic, bloated with pleasures and awash in 500-channel cable, movies and hip hop. Between these two prongs, an angry fetus is cultivated.

This fetus will always demand its rights, but never look toward its responsibilities. Except work, that is. It will worship obedience to the dollar and to being popular among others before anything else. The fetus wants freedom, except when it craves acceptance.

Our doctrine of equality, by then requiring some method of controlling people since they no longer have any motivations in common, settles on the lowest common denominator and also the most convenient method of control. By our pursuit of pleasure, we enslave ourselves.

And being enslaved, yet being told we are free, we become divided between two worlds. The simplistic world of control, which seems to “make sense.” Then beyond that there’s the wider world of life outside human control, including nature and individual experience. That world is not compatible with our fantasy.

The fantasy world is formed of television advertisements, things people tell us in conversation, government pamphlets, morals in movies, cliches from the society pages, and the nanny bullying world of academics and other “experts.” Live in this world, and everything makes sense… in a simplified way.

Step outside this world and you are alone. The prongs shatter. You are no longer receiving a benefit from freedom; it’s a gift you do not need. You are no longer afraid of lack of money, because you see how money can follow any useful thing that you charge for.

But you are also a stranger in a wasted land. You speak a different language; you recognize different causes of events. You care about different outcomes and radically different timescales. You might as well be from a different species.

Luckily you are also no longer a brat. The sense of entitlement has gone away. It has been replaced with the oldest emotion of humankind: a sense of wonder at the world and an enduring sensation of potential and meaning to it, and a desire to lay hands on it and to make of it something great.

The protests that fizzled | Jesus