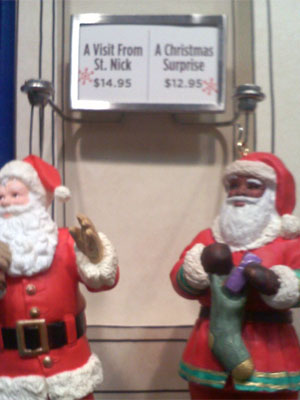 In an atheistic era when we are told that nothing exists beyond the material and what we can perceive with our senses, it is ironic that we are also told not to judge people based on appearance. The theory, cliché and motto is that it is only â€œinsideâ€ that counts.Â

In other words, if you make decisions based on appearance at all, you are shallow. Hateful. Elitist. Bigoted. Ignorant.

It goes without saying that appearances may be deceiving, but this is no reason to mercilessly doubt oneâ€™s intuitions or judgments based on â€œappearancesâ€ and prior experience.Â  As in the last two centuries, we content ourselves to flirt with hyper-skepticism while we wait for some sort of â€œquintessentialâ€ knowledge from on high.

The dirty little secret is that snap judgments and intuitions are more often right than they are wrong.Â  You can judge a book by its cover and appearances are important.Â  It turns out criminals literally look different than non-criminals.

In their experiments, Valla et al. show pictures of the faces of 32 young Caucasian men in their 20s, without scars, tattoos or excessive facial hair, all in neutral expressions.Â  Sixteen of them are convicted criminals, and the other sixteen are not.Â  Valla et al. simply ask their experimental participants to indicate how likely they think it is that each man is a certain type of criminal (murderer, rapist, thief, forger, assailant, arsonist, and drug dealer) on a 7-point Likert scale from 1 = extremely unlikely to 7 = extremely likely.Â

Their results from two experiments consistently show that individuals can tell who is a criminal and who is not, by indicating that they believe the actual criminals have higher probability of being a criminal than actual noncriminals. – “Criminals Look Different From Noncriminals,” by Satoshi Kanazawa, Psychology Today

The word â€œprejudiceâ€ has been slandered over the years and has resulted in people questioning the whole notion of judgment and preference, altogether.Â

In an interesting parallel, we no longer take words at face value or their traditional meaning, either.Â We are constantly trying to uncover what people â€œreally meanâ€ by certain words and re-interpret them.Â

Thus, â€œprejudice,â€ which simply means to judge beforehand, has taken on an â€œevilâ€ connotation.Â Judging things ahead of time is based on prior experience and it is unavoidable. In fact, it helps us identify repeated patterns and pick which ones we’d like to participate in, based on past histories. But that’s not very socially pleasing.

In the abstract, the socially pleasing narrative of anti-prejudice sounds sensible:

If I prefer A to B, am I â€œprejudicedâ€ against B?Â Yes: I never gave B an equal chance to A. B might not be what he appears to be. It’s cruel and inhuman to hold him to that standard.

Except that makes no sense. We all know that avoiding disease, dysfunction and depressing circumstances is a good idea. But the notion that some ideas are good, and some are bad, is as much bigotry in the abstract as preferring a mythical “A” to a mythical “B.”

We arrived at this point by thinking in the following way:Â there is no universal and objective standard for what constitutes a â€œclean and organized house,â€ therefore, â€œwho are you to judge?â€Â

In a sense this is true; the line between clean and dirty will be different for everyone, in the smallest sense. For many of us, what will be acceptable varies. But it doesn’t vary widely. We all recognize a really clean house, and a really dirty one.

Unless you are a Zen master on a mountain top, every day you will interact with different people who have different standards. Thus, you will be forced into making intuitive judgments, even if unconsciously.Â The best thing we can do is accept this and not relegate it to the obscure corners of our mind, which is what we do by ruthlessly railing against our â€œprejudicesâ€ and doubting our intuitions.

Furthermore, you’re going to rely on your instincts and your ability to use your prejudices. The guy who spots the violent criminal first, and gets out of Dodge, wins. The person who spots the scam gets to have a retirement fund. Perhaps most importantly, the person who can recognize that which is irrelevant to them, can recapture hours of each day by filtering out the inappropriate.

Life offers abundant situations where judgment must be made quickly and you donâ€™t have the luxury for casual analysis. Letâ€™s say two punk kids show up at your house and they both want to date your daughter.Â  One is unkempt, flippant, and incoherent.Â  The other is dressed well, respectful, and articulate.Â

Are you going to judge these two kids differently?Â  Are you going to prefer one to the other?Â  Are you going to give one a harder time than the other?Â  Darn right you are.Â  But the other question is: Â are you prejudiced against the unkempt-ness, the flippant-ness, or the incoherent-ness?Â  Or is it some special combination of the three?Â  Or is it just some general unification of all of them?Â  Who is to say, right?Â  Even you, yourself, can probably not pin it down exactly, and more importantly, you shouldnâ€™t have to. Your intuition and perception identify one as trouble.

Now letâ€™s get trickier and introduce another visual factor.Â  If the unkempt kid and the well-dressed kid are of different races, are you judging them based on race or on unkemptness? Only you know. But a third party could easily cause a scene by insisting that you are prejudiced against skin color Y and not his general demeanor.Â  If you insist otherwise, it only makes you look worse as if you are trying to cover something up.

To cast prejudice as â€œevilâ€ is to be prejudiced against prejudice. The idea in turn insists that there are no standards and that organized is no better than disorganized. All of the supposed rational analysis working against preference and judgment amounts to madness and compartmentalization.Â It is better to have these things out in the open rather than relegating them to cryptic hatreds.

Some nexus of experience, judgment and intuition has occurred that tells me to avoid this person. No one else should be able to force me to act differently, against my innermost feelings and sense of self-preservation, solely for the pretense of avoiding prejudice.

All bright | Winglord – The Chosen One