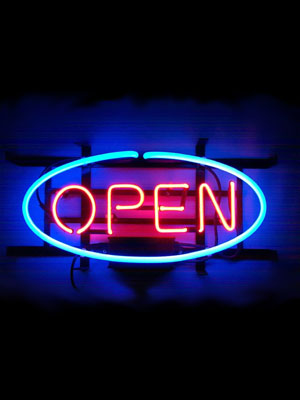 Some time ago a vision visited me and I have not been able to shake it since.

In it, I had died and was alone in a grey wasteland. It was colorless soil, sky, water and listless sandy dirt. A land of entropy (a metaphorical equivalent to modern shopping mall culture). As I wandered through this wasteland, I became aware of large heap off to one side.

On closer inspection, these piles were of the detritus of a life. One was a heap of books someone had owned, another a mound of clothes, and still another a mountain of the trash generated by an individual life. Together, these formed the “landfill count” of any human person. They are the sum total of negative impact on the world per life.

Ever since that time, the purchase of new equipment has been less of a friendly “Christmas morning” experience, and more of a careful balancing test between actual need, perceived want, and that landfill in the wasteland.

Over the last bout of thunderstorms, our server room monitor died. Since it was a vital piece of kit, it needed replacement. In typical modern style, which is to say a peasant acting as a king, I researched the options available and picked what seemed to be the most sensible option, swiped the card and took home a new box full of plastic and metal. The landfill grew higher.

Omit twenty minutes of assembling and installing. Fast forward to the first glance of the new monitor. The current models are backlit LCD displays with the 16:9 ratio prized for watching wide-screen movies. This is technology catching up with itself; the new style screen has brightness level that old CRTs had, which as it turns out is most comfortable to our eyes.

The manufacturer cranked up the brightness settings by default on the new monitor. Brightness and contrast are like reciprocal opposites; the closer something comes to absolute brightness, the less difference between colors it can have. The result is that finer distinctions between colors tend to disappear. What is left is a single glowing image, like a city on a hill, in which all distinctions are erased and replaced by a uniform level of quantity.

The colors on the monitor radiate in abundance. They are of equal contrast, and in every moment, one rises to the peak of intensity. The result is that even organic images become cartoon-like, formed of primary colors and bright line boundaries. The message is clearer. Or at least, the surface of it is.

Luckily an engineer had realized that this cartoonish image is miserable for experienced users, and inserted a setting for high discernment as opposed to high fidelity. With a click, all was fixed, as the world rushed by outside in a manic dash for the next rush, like a cartoon of bright colors on fast-forward.