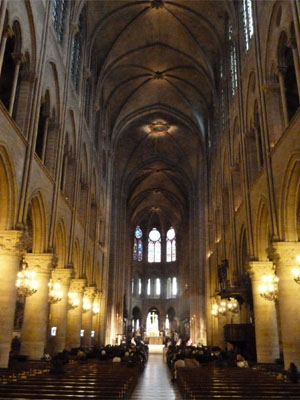 Some of the right’s most promising bloggers have founded Orthosphere, which dedicates itself to traditionalist religion as the center of civilization.

This brings up the question that periodically dogs the right: is it necessary to be religious to be conservative?

As with many simple questions, the answer is complex and includes both no and yes. The doctrine of conservatism itself, which we might style as a kind of originalism based in time-tested solutions for maximizing individual happiness of the most well-adapted, per se, does not require religion. However, it also reminds us that the best things in life are not divisible. We cannot separate government from culture, sex from love, love from family, intelligence from character, etc. as the left alleges.

For this reason while it’s not essential to be religious to be a conservative, it is essential to recognize the importance of unison in a society. Much as diversity always fails no matter what the type and no matter what the ingredients, unison is the path to a healthy society. Rough conformity of heritage, values system, philosophy/religion, culture and language produces the healthiest society. The term “rough conformity” means everyone basically on the same page, with no deviation nearing Jonathan Haidt’s magical 20% deviation that causes social disassociation and decline.

All conservatism is built on this principle because it emerges naturally from the application of the verb “conserve” which is the root of conservatism. Against the tide of popular opinion, trends, crazes and moral panics, conservatives preserve, uphold and nurture traditions and time-honored knowledge.

We might call conservative knowledge “organic” because it deals with whole concepts and not their deconstructed parts, as both liberalism and modernity do. Modern people will compare, for example, the income of serfs in feudalism to the income of the poor today, and conclude that modernity is brilliant. A conservative will look at many more factors, centered on the end results of these differences, and conclude the opposite.

The orthosphere makes a good statement of this organic integration:

Socio-politically, we can be called â€œtraditionalist conservativesâ€ or â€œChristian reactionaries.â€ Since we agree that Modernityâ€”the fundamental principle of contemporary Western Civilizationâ€”is radically defective, we are branded â€œfar-right.â€ In truth, we affirm what was regarded as self-evident by the vast majority of mankind until well into the Twentieth Century: Religion is true, authority is valid and good, man and woman differ in essential ways, and so on. If we are to be on the far-right for affirming reality, so be it. – “Who we are and what we believe,” Orthosphere

While we agree on the essential idea that civilization needs a consensus or agreement as to its most essential values and practices, as well as the composition of its people (nationalism), we believe that a society can be compatible with a religion without forcing all of its members to participate.

For example, the writers at Secular Right are materialists because they are material scientists, and so will not be joining the happy crusade for religion. However, their values and those of the religious seem to overlap more than not, and the Secular Right writers would probably be very happy in an Orthosphere-ideal society.

Those of us on the right are divided because conservatism itself, after the revolutions of 1789 but even after the mercantilization of society during The Enlightenment, has been a defensive action. Liberalism grows in popularity each year and we try to hold back the tide.

However, since it takes a few centuries for the results of any political action to be seen, we have only lately been seeing the results of what happened in 1789. Liberalism caused internationalism, this caused a global culture war, and then social liberalism caused the destruction of family, culture, heritage, religion and other essentials.

What is left is essentially a large privatized concentration camp in which our decisions are limited to choice of job and shopping, and anything else is washed away by its unpopularity and the obliviousness of the population at large to the underlying issues.

Conservatism opposed this change from the start and opposes it still, which is why conservatism is growing in strength as opposed to liberalism, which is waning. The biggest mistake conservatives can make at this point is by trying to be “like” the successful liberal parties. That sends the message to the voters that we are another type of the same crazy ideas that got us in this mess.

For this reason, the Orthosphere is a success among conservatives because it offers a clear and distinct alternative that can be easily summarized: society needs to center on religion. This is not far different from social conservatism’s mandate that society must center itself on values.

In turn, that ideal is not far from the paleoconservative ideal that society be formed of the unison of culture, heritage, values and customs, or the New Right ideal of an organic future society, or even the deep ecologist concept of a society based around reverence for nature and culture instead of commerce.

All of these things are compatible and are united by a simple fact: they represent society as it was before modernism. Then we insisted that a civilization be formed of agreement, not agreement to disagree. And as our anarchic shopping mall of a Nanny State falls apart, more are agreeing with this concept.

Split up | The budget bomb that will bankrupt the USA