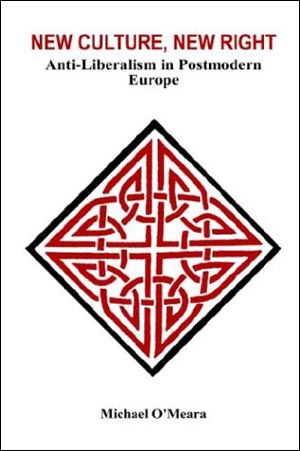 With New Culture, New Right, Michael O’Meara undertakes an exhaustive survey of the post-war conservative renewal. Every concept that will become a talking point is mentioned here, and analyzed without excessive self-interested criticism. The book is dense, detailed and technically accurate, which means it is not for everyone, but for any person seriously considering the New Right as an option, this is essential reading.

This fiery little volume, weighing in at just over 200 pages, has quickly become one my favorite go-to books about the New Right. It is academic (mostly) in style, but more importantly, it is a walk through history by way of its thinkers, point-by-point showing us the evolution of the ideas that are incorporated into the New Right. This is not propaganda or leisure reading; it’s a history of politics through philosophy.

Through a complete study of the different facets of the New Right and related movements, including the difference between its US, UK and European variants, O’Meara triangulates on a central point that is too often forgotten: this movement is a revolt against what liberalism has wreaked from 1789 to the present day, and its key struggle is finding an anti-liberal viewpoint that is also popularly selectable, and its greatest self-contradiction is its tendency to adopt liberal ideas.

Academics will recognize in this book the kind of political study through historical events that qualifies a great secondary source, meaning that after you’re done perusing the Churchill speeches and Stalin bodycounts, you turn to a book like this to figure out what it all meant.

If you want “The War Nerd” or Paul Krugman for educated adults, this is the source to which you will most likely turn; it is reminiscent of the detailed historical analyses of R. Palmer or Alexis de Toqueville, in that it traces history as a progression of ideas evolving in response to their environment.

Unlike the works of Guillaume Faye or Tomislav Sunic, this book does not take a particular position, but instead reports on the birth of the New Right and its ideas, including credible options and contrarian opinions. Through this method, an aggregate forms in the mind of the reader which shows not only the details of the New Right, but where it fits as a transition between periods of history.

O’Meara is superb in his concise insights into the underlying meanings of the terms we find bandied about, a process he creates by anchoring these terms to their structural significance in the construction of nations from political methods. Often in the course of a few sentences, he clarifies what has been vague for decades, and in doing so, smooths out a concrete foundation on which other ideas can build.

He writes in the chapter “Metapolitics”:

Like other politicians of the “corrupt, cosmopolitan oligarchy” (Le Pen), Gisgard d’Estaing assumed that economics was primary, where culture was a mere accounterment — sign, perhaps, of finesse — but nothing more consequential.

Benoist, by contrast, reversed the relationship. It is not the political economy that determines a society’s ideology (that is, the meaning-bearing way a people culturally understands itself), but ideology that dictates its politics. As postmodernists would emphasize, culture is not power per se, but its sheathe. How things are perceived, symbolized, and evolutioned influence how society’s agenda is set and how power is wield. If the anti-liberal forces were ever to regain control of the state, they would, Benoist concluded, first have to change the culture. (43)

This concept shows up in other books on the New Right, but never quite gets explained as being as pivotal as it is. O’Meara coaxes it from the limelight into its rightful place and shows how essential this difference between the New Right and other political factions is, and then launches into a short chapter that skillfully analyzes the symbols in use by the anti-liberal movement and explains their relevance to the overall theory of that movement.

One unique factor of this book is that it integrates the writings of European philosophers and political philosophers beyond Nietzsche, Evola and a handful of right-wing thinkers; it is a broad-spectrum survey that attempts to incorporate the learning of the path and show the New Right as one of its culminating options, the other being a Fukuyama-styled globalist, multicultural, consumerist liberal democracy.

Approaching the topic from the philosophical perspective enables this book to go deeper into the topic than politics will allow, finding the relevance of symbols apart from their use as slogans or responses to the immediate political situation, and instead showing us the evolution of ideas over time as producing the current conflict out of the necessity of moving past an obstructed past.

As argued in all the above chapters, the single most consequential force assailing these significations, and hence compromising the integrity of European being, is liberalism, which conceives of man in the way modern science conceives of inert matter. On the basis of its simplistic reductions, the European is rendered into a quantitative abstraction, undifferentiated from the rest of humanity.

So reduced, he is subject to laws that isolate and decontextualize him, limit his motivation to material self-interest, relate him to other individuals through faceless contractual arrangements, and, most damagingly, lock him into a mono-directional temporality at at odds with his world-open nature. Then, as the instrumentalist dictates of this condition override deeply rooted meanings, life is made barren and new anxieties arise to haunt it.

With postmodernity, this process attains nihilistic proportion, as historically formed peoples are transformed into consumerist tribes and identity is reduced to an array of vacuous lifestyle choices that threatens to extinguish the last vestiges of their ancient heritage. By severing Europeans from all that makes them a distinct people, liberalism has created the worst possible world for them.

As Jose Ortega y Gasset describes it: “Europeans do not know how to live unless they are engaged in some great enterprise. When this is lacking, they grow petty and feeble and their souls disintegrate.” (208-9)

The author intelligently summarizes not just what points are relevant to the New Right, but why not in the context of political dogma, but in the question of the philosophy of the individuals that make up a society and thus make that a pleasant or miserable place to be.

Not all is perfection. For a start, this book needs an editor to go through and find the spelling mistakes and typos that mar several chapters. Further, sometimes O’Meara speaks too much in the language of his specific audience at the expense of the wider academic field; among the right, “negro basketball player” and “‘anti-racist’ organizations (most dominated by Zionists)” may be considered sensible, but for him to use those terms in such a vividly factual book seems to me wrong not on a moral level, but an informational one; he simply hasn’t explained, nor revealed the history for this verbiage or why it is relevant. Ideally, O’Meara will expand on this volume with an explanation of where Zionists, who are like right-wing anti-liberal Jewish nationalists, and descriptive terms for the African races fit into this picture. Clearly he can do it and would reveal a good deal about how we should visualize our relationship to those groups.

O’Meara sensibly summarizes the views of the New Right, then tacks on a final chapter where he covers honest critics — not those who hope to refute, but those who hope through pointed questioning to force evolution — of the New Right, and injects some of his own thinking through questions as well. This allows the reader to make up his or her own mind, and because the buildup of ideas has been so diligent, requires relatively few words to make itself clear.

If Guillaume Faye’s Archeofuturism is the call to arms for the New Right, and writings by Sunic, Benoist, Evola and Guenon its cornerstones, New Culture, New Right is its textbook — clear writing for those who wish to understand this movement on a structural level as it emerges from history. For many of us, it has become a favorite reference because it traces these ideas to their roots and in doing so, makes them come alive.