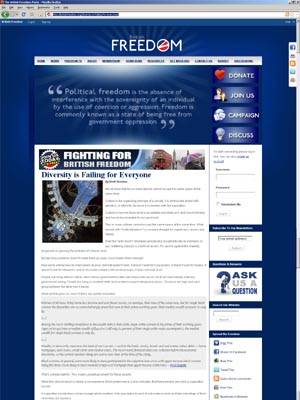 The British Freedom Party has republished one of my articles, “Diversity is Failing for Everyone,” on their complete and elegant web page. I am honored to be a small part of such a publication.

The party defines its mission as follows:

After years of modern “distraction politics,” it’s interesting to see people picking up where politics left off in the 1930s: a local focus, relying on collaboration not opposition to culture, and working toward promoting a type of stable, possibly boring, but well-organized society of the type that produces great works of art, culture and learning.

You can see why it’s fun to be on such a publication. To see the article, point your browser here:

“Diversity is Failing for Everyone,” by Brett Stevens