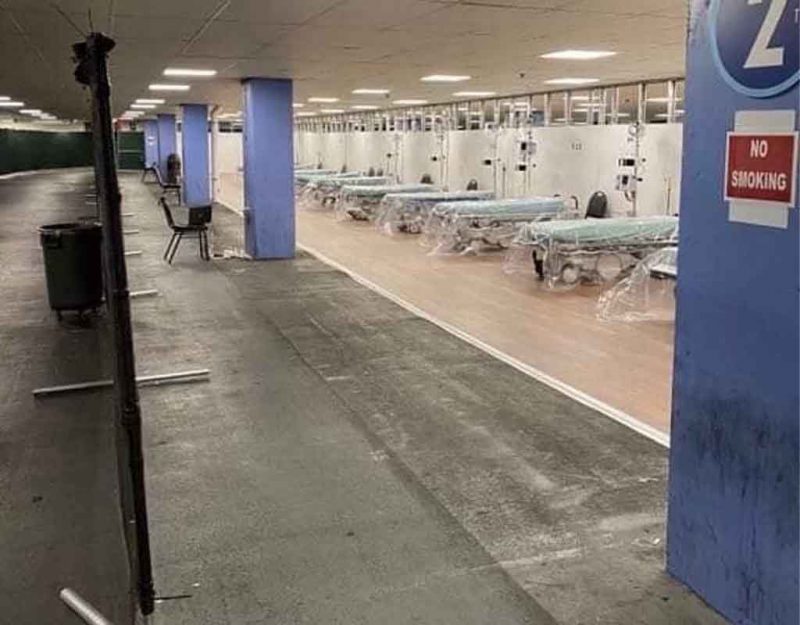 We are fortunate to be able to present “Michigan Quarantine: A Satirical Tale of Chaos and Civil Disobedience,” a tale of COVID-19 panic and reaction, in serialized form thanks to author Lilchika Rose.

Agnes Kock leaned back in her jacuzzi, smiling. Things had all turned out very well. Very well indeed. Her pager beeped, and she fumbled to grab it.

“Yes?” Agnes demanded. It was her house manager; her hairstylist had arrived and was preparing in the salon.

Agnes sighed and stepped out of the jacuzzi, slipping on a robe. She certainly needed her hair styled; she had a press conference scheduled the next morning.

On the way to the salon Agnes Koch grabbed her laptop. The stylist wouldn’t mind; she always allowed Agnes to browse while her hair was styled worked.

After Agnes made herself comfortable, she and the stylist began chatting about what everyone was buzzing about: the gridlock protests.

“Can you believe those people.” Agnes sneered in disgust. “Rednecks.”

“I know.” The stylist confirmed, massaging the governor’s scalp. She always tried to suppress her nervousness around the governor. She’d gone through three stylists before this one.

“I ought to lock those hillbillies up.” Agnes pulled up pictures of the protest on her computer. “Look at those thugs carting guns around.”

“We ought to outlaw guns.” The stylist concurred, hoping that was what the governor wished to hear. She predicted correctly.

“We will. Every idiotic gathering they have like this gives us more and more ammunition.” Agnes smirked, always amused by her own witticism.

“The ironic thing is every time they throw a tantrum, they’re pushing me further and further ahead in my political career.”

“You mean because of the publicity?” The stylist asked dully.

“That, and everything else.” Agnes closed her eyes, smiling. The conversation continued in the same strain the stylist finished and Agnes retired to her bedroom.

The governor always rose at six a. m. sharp. She stretched, entered the kitchen, and grabbed her coffee without acknowledging Jemima, the cook. Agnes arranged herself cozily in her favorite nook of her spacious office: a corner of a room that offered an expansive view of her exotic garden. Agnes sipped her coffee and opened her computer, waiting for Jemima to serve breakfast.

Agnes Koch spit out her coffee, leaving brown liquid streaks across her computer screen. She frantically attempted to wipe the streaks away to reveal…herself. A video of Governor Agnes Koch was splashed across the front page news.

Agnes clutched her chair. The video was from the evening before; it recorded Agnes having her hair styled.

Ohhhhh no. Ohhhh no. Having the hairstylist in the building violated the social distancing rules Agnes herself mandated. This was a disaster…but wait. Wait. What did Agnes say during the styling?

Agnes cried out and jumped back, almost upsetting the silver tray Jemima had brought.

I know. Agnes determined. I know who I need. I’ll have the house manager send for her now.

Agnes rushed to open the office door to find Cullington standing outside it.

“The manager sent for me…” Cullington began by way of explanation. Agnes grabbed Cullington’s elbows and pulled her into the office.

Jenna rose early, as she often did in the spring. She first walked through her garden, enjoying the beautiful sunrise, watering the vegetable plants according to their specific needs (she had only planted a few hardy plants; the rest of the seedlings were inside, waiting to be planted in late May). Then Jenna prepared breakfast, sipped her coffee, and switched on the kitchen television. When she turned to face the television, she fumbled her coffee, almost spilling it onto the eggs she was frying. She snatched the controller to turn up the volume.

“Yesterday evening, Governor Agnes Koch of Michigan was hacked and this video was disseminated of the governor having her hair done by a stylist in her home, in violation of her own orders that no stylists be working and no in-home visitors be received for any reason.”

Jenna sank into a chair, wide-eyed.

“The governor was also recorded making unsavory comments about her own constituents.”

“I ought to lock those hillbillies up.” Agnes’ shrill voice emanated from the television. “Look at those thugs carting guns around.”

“Collin!” Jenna called shakily. “Collin! You better get down here.”

Jenna sat transfixed by the screen as her husband groggily lumbered into the kitchen. He started when he glanced at the tv.

“Holy-moly.” Collin muttered. “What happened?”
“The governor was hacked having her hair styled in her own home, breaking her own rules.” Jenna answered wryly.

“Hacked? Who would do that?” Mitch stared at Jenna while an expression of horrified suspicion grew across her face.

Jenna flew across the room and up the stairs, banging on her teen son, Carter’s, locked door.

“Listen, young man, you open this door this minute!” Just as Jenna suspected, she heard subtle rustling in the bedroom.

“Not anymore, you’re not now open the door before I break it down.”

The lock clicked, and Jenna swung the door open and Carter scurried to the corner. Jenna hesitated in the doorway.

Carter was white as a ghost. “I just wanted to see if I could.”

Jenna sank into a chair near the door, burying her face in her hands.

“Cancel it all. Cancel every single appointment. And no interviews!”

Agnes Koch paced back in forth in her office. She was still in her silk morning robe; her breakfast sat untouched on the oak table.

“No!” Koch lunged at Culling, snapping the computer shut.

“You don’t know who’s watching.” The governor hissed conspiratorially. Fool her twice they would not.

“We’ll blame it on the Russians.”

“They’re going to blame it on the Russians.” Collin was sitting with Jenna at the table, trying unsuccessfully to calm her. She’d been repeating the same actions for some time: Stand, pace, shout, cry, sit.

“They always blame things on the Russians.” Collin added cheerfully. Apparently this set Jenna off to begin her routine, and she stood.

Mitch stress smiled. “It’s almost impressive, if you consider it in that light.”

It was the wrong thing to say. Jenna groaned angrily and stomped away, dabbing tears. “A criminal!” She cried angrily. “My son a criminal.” She swung back to look uncertainly at Mitch. “He is a criminal, right?”

“So what’s the worst possibility?” Jenna demanded, sitting back down at the table. The pattern was complete.

Jenna threw up her arms. “A felony!” She seemed about to repeat the whole stand-pace-shout-cry-sit procedure, but instead she impulsively snatched the remote and turned on the television.

“Don’t!” Collin sensed anything on tv would upset Jenna more, but she insisted. They sat in stunned silence as they saw their representative Will Price being interviewed on national television. He looked thrilled.

“To be honest,” Will readjusted his tie smugly, “We certainly think there is legal ground for Governor Agnes Koch to be tried for violating her own mandate…with penalties…permit me to quote the governor herself…. ‘up to a felony and imprisonment.’ To my knowledge, lawyers are drawing up the necessary documents as we speak.”

“What do you have to say about the allegations that this hacking job was completed by ‘Russian agents’ sabotaging the democratic party?” The interviewer asked Will Breen. Jenna and Mitch looked at each other knowingly.

“I cannot speak on the source of this video, only it brings great justice, shedding light on a perpetrator of hypocritical injustice.”

Jenna muted the television. “Ok, so will they trace the hacking job back to Carter?”

Collin sighed. “That depends.” He muttered uncomfortably. “That depends on many factors. Basically, how careful Carter was and how well he covered his tracks (I can find that out), how organized the government department is that could look into this, and the loyalties of the specific government members.”

“Whether or not they actually want to find him or cover for him. They may agree with what he did, and fake an inability to trace him.” Mitch clarified. Jenna’s hands began to tremble.

“I’m only a minor, Mom!” Sixteen year old Carter called down from his bedroom, inciting a furious response.

“Carter Aspen Smith, I don’t want to hear one more word out of you! You are infinitively and exponentially grounded!” Jenna yelled. She turned to Collin accusatorily.

“Really, calm down, Jenna.” Collin retorted, suppressing laughter. “Can’t you find even a little humor in it?”

Jenna thought for a moment, then began laughing in an unhinged way. After a moment she caught herself and smacked Collin loosely on the arm.

“This is no….laughing….matter.” She insisted, punctuating each work with another miniature smack. “They’ll trace it back to this house, to Carter, won’t they?”

“Then we must leave.” Jenna determined.

Governor Agnes Koch had opened her second bottle of wine. She was still in her slippers and silk robe and hadn’t stepped foot out of her office.

“I know! I know!” She intoned dramatically to Cullington, who was curled up on the browned leather sofa.

Cullington buried her head in her hands. “I don’t think that will mean a lot.”

“Of course it will!” The governor was becoming a bit tipsy. “It’ll mean a lot!”

“We need to speak to a lawyer.” Cullington repeated for the third time.

“Lawyer, shmoyer.” Governor Koch thought for a minute. “Ok, bring in the lawyer.”

“We can’t bring them in; you made a mandated decree declaring they can’t come here.” Cullington reminded the governor tiredly. “Technically I shouldn’t be here…the maid shouldn’t be here…and that hair stylist…”

“So call them up.” Agnes Koch interrupted angrily. The moment Cullington reached for her phone, however, the governor lunged at her. “No!” She screeched.

Cullington regarded her tiredly. “Six. Feet. Apart.” She groaned through clenched teeth. She was really beginning to lose her patience. The governor rose and began to pace.

“You simply can’t use the technology.”

“Why don’t we ask the lawyers to come consult with you from the other side of the window screen in the garden foyer?” Cullington said sarcastically.

“Excellent idea.” The governor agreed, obvious to the ridiculousness of the concept.

“Listen.” Cullington continued tiredly, “I will call and consult with them myself, taking notes. I will then relay the information to you in a room with no technology. Will that suffice?”

It seems Governor Koch had no other choice.

Jenna Smith sporadically threw her belongings into a suitcase. Collin was speaking to Carter, analyzing what steps he had taken to hack the governor and publish the results, and how easy it would be to trace the step back to him.

Jenna rechecked her to-do list. Pack the essentials. She’d stay up all night finishing her projects for her students through the end of the year. Collin would back up their digital devices, then bleach them and restart them, making them impossible to trace.

They were walking away from so much, but Jenna couldn’t think about it or she’d lose control. She could only push forward.

This was going to be a wild ride.

If you enjoyed this installment, please look for the publication of the next installment under the title Michigan Quarantine: Installment Two.