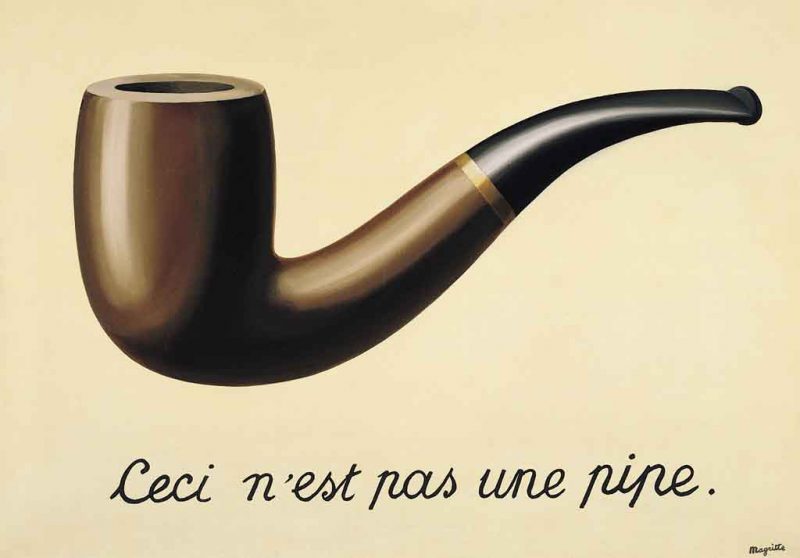 A symbol is not the thing that the symbol stands for. A nuclear sign is not a nuclear explosion. The word “rug” is not a rug. And touching a biohazard sign won’t necessarily make you sick.

This sounds like blatantly obvious common sense, but we can all be suckered in by more subtle forms of it. Case in point: militias and doomsday preppers. Your average Neo-Nazi or undercover far-right family will cordon themselves off in a compound in Utah somewhere, buy a bunch of guns and canned food, and make babies while waiting for the world to collapse. Of course, the world never ends and the slow degradation of our civilization into a third-world dumpster continues apace. What happened? Well, you got suckered in by confusing a symbol for the thing that the symbol stands for. It may feel good to cordon yourself off in a compound with three wives and crates of ammo, but that’s ultimately just a symbolic gesture because the long-awaited apocalypse never arrives. It was all done just to make you feel good. You never actually did anything.

The truth is, as hopeless as reformism looks, we can’t be catastrophizers and engage in accelerationism hoping for some cleansing apocalypse because that’s just a symbolic gesture. Don’t stand around waiting for an apocalypse. Find something you can do now. And what you can do now is separate. I’m not talking about establishing some compound out in the Sierra Nevada range. I’m talking about going through the garden of your life with pruning shears, one-by-one cutting the thousands of tiny cords that bind you to the existing system.

The methodology is: for every facet of your life, ask yourself, “How can I build a version of this exclusive to my kind of person?”

Does this mean compounds? Partially, although they’ll resemble an ordinary suburb or gated community more than a Waco compound. Yes, you’ll have guns and dogs and solar panels and a generator and rainwater collection or well water. And yes, you’ll buy up land for lots of other like-minded (and like-gened) people to live near you. And yes, you’ll be breeding like rabbits to bolster our demographic might.

But it means more than compounds.

It means skills: teaching your children a trade from the time they’re small. Given how genetics and caste work, your kids will probably have aptitudes similar to your own. If you’re a welder, teach them manual work. If you’re a lawyer, teach them rhetoric, logic, and the law. If you’re a doctor, teach them science and mathematics. We need a class of like-minded professionals to solidify our position in society. We especially need people in IT. Information Technology is governed by network effects, and we will not have any noticeable degree of control until we’ve populated it with our own people. IT already has a number of right-wing white people in its ranks. We need professionals in other fields too, certainly, but IT is our foothold on the rest of society, our Athenian power play to make sure that the strong arm of the government can’t squeeze us out by forcing us to build section 8 housing in our neighborhoods or some such thing.

It means networks. That means fraternal organizations like the Shriners or Freemasons, local lodges, cookouts and game nights with like-minded neighbors, incentives for the right kinds of people to move near you. It means flagrant nepotism at every opportunity and covert preference for one’s own kind. Most of us already do this if we’re not leftist cucks, but we need to begin doing it consciously. Look for employees and HVAC workers and plumbers and business partners at church or around the block before you look online — unless we can begin using “conservative” job boards that allow us to select only our own kind. And in all of these, remember that there can be no central organization, no single hub or fulcrum that the rest spins around, because that presents a target. And when they try to bust you for racism, just shrug, look at them stupidly, and say, “What? There is no organization here. This conspiracy you’re talking about doesn’t exist. Where is it? Who’s the leader? You’re imagining things.”

And finally, most importantly of all, it means money. We need to begin concentrating wealth in our people’s hands, and that means letting go of the individual competitiveness that asks your kids to pay you rent as soon as they turn 18. We need to let go of the petty, small-minded individual competition that creates good middle-class drones and begin thinking in intergenerational terms, beging thinking in the kinds of terms that create dynasties and powerful aristocratic families. Let’s stop locking ourselves on compounds and start building workable neighborhoods. Less Mein Kampf, more Machiavelli. It is deeply ironic: the path toward survival, for us, is to Jew the living daylights out of our elites and the minorities that they have allowed into our lands.

This is all possible because you are less isolated than you think. Many of the chummy middle-class conservatives you know will succumb to ideas like this if they are introduced to them gradually, and that goes double for their kids. The key is to stop looking for “converts” because you won’t make any. We’re not trying to convert anyone here. Rather than looking for converts, we want to get everyone on the Right on the same page, or at least, close enough to pull in more-or-less the same direction. This last part is critical: if we want to detach and begin forming our parallel economy (and, eventually, a parallel society) then we have to understand that it’s a matter of finding all the sane white people and getting them to push in vaguely the same direction. It’s not about making converts are achieving some mass awakening. The people who are capable of sanity, are already sane. The question is getting them all focused on the same goal, or a small set of similar goals.

The biggest obstacle here is to break out of the trap of centralized thinking. Remember that you cannot ask who will be in charge, because the answer is “Nobody.” You cannot ask what our organization will be called because there won’t be one. You cannot ask what our banner is, what our symbol is, or what our name is, because we have none of those things. Instead, we have a profusion of local leaders, loose networks, a flood of symbols ranging from blatant to dogwhistle. Remember that here on the right, we are the last guardians of human spontaneity. And we will leverage it to devastating effect.