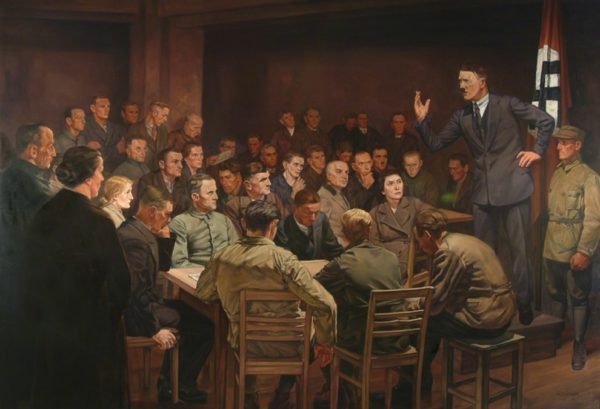 Why is Hitler, and by extension the Nazis, still a prime obsession in our society? One obvious answer is that the post-WWII world, and the legitimacy of American hegemony, is tied up in it.

America, we are told, can never go back to minding its own business because of The Holocaust™ and Isolationism.  And that’s just coming from the garden variety cuckservative that will always bind together the US military with Leftist foreign policy, providing us the true fasces of our time. Today’s iteration of the Roman Empire is once again a double headed eagle, one head Spartan red state militarism with its brain gnawed out by its blue counterpart from Foggy Bottom.

The Cult of Hitler, and make no mistake, his cult of personality is still going strong, is a remarkable thing made up of worshipers from every walk of life. It isn’t just his ironic fanboys on /pol/ that worship the long dead dictator, but all the “right thinking” goodwhites who never pass up the opportunity to curse his name to this day. Just because they’ve made Hitler the patron deity of evil, doesn’t change the fact that they still give him the honors of a deity. In fact, most of his worshipers belong to the latter camp, making Hitler’s status as the G_d that Holocaustianity worships the precise definition of irony.

Breaking free of this cult is a great, unfulfilled challenge for the Alt Right, but let me be clear of what we need to break free from. I do not mean we fall in line with the frame set by the Cathedral in regards to Hitler. Anyone of sufficient intelligence understands that pop history, and especially the politically relevant pop history of WWII is nonsense. We just don’t know how it’s nonsense.

Opinions on the Alt Right vary widely from condemning Hitler as just as bad the Cathedral claims, to those that claim he was, “The Greatest Person Ever!!!!” — no, for reals. I read that on a Hollywood Nazi site once.

In fact, the failure to sit down and have a definitive, honest redpill on Hitler and Nazism is essential to any political movement coming out of the Alt Right to succeed.Â  It was a major oversight on the part of Mencius Moldbug to just assume, after having deconstructed liberal democracy and its Cathedral, that he hadn’t just inadvertently rehabilitated Nazism and even Soviet-style Communism.

If you demonstrate that everyone has been in a false reality, there’s no reason to assume that any of the foundational assumptions of that false reality hold true once you break free from it. Naturally, no one on the Alt Right was inclined to meme Stalin back to greatness, but /pol/ had been drawn to the natural Schelling point of Hitler for years.

History is all about interpretation. It’s about constructing a plausible narrative based upon available evidence. But the interpretation is the key part to this, because unlike mathematics or physics, the human actor is the key to history. Two plus two will still be four and the laws of thermodynamics are set, but why the War of Northern Aggression happened is a human construction.

And adding to all of this is the fact that the Cult of Hitler is the law of the land in many parts of Europe, and the de facto law of the land in the US and the UK. Questioning Hitler’s status as the King of All That is Evil is heresy, punishable by loss of your job, friends, family and good name.

The trap that is far too easy to fall into is to yell “black” when the enemy says “white” and by so doing to engage in the assumption that Hitler was just Jesus except not dressed like a hippie. Jim Goad published an image of German soldiers crucifying Hitler on the back of Answer Me! No. 3, an arresting image that exemplifies the 1488-er cult of Hitler. (“He killed for your sins,” to borrow a line from Adult Swim’s Sea Lab 2021.)

Hitler is dead. He’s been dead for 71 years. He’s going to continue to be dead until the heat death of the universe. He is not divine, and no, you cannot meme someone into godhood. It didn’t work for Kek or Gnon either. Learn about allegory lads.

The challenge before us is that the keystone of the Cathedral that towers over us is the Hitler Meme. To remove it, and bring down Babel 2.0, the Alt Right is going to need some honest, genuine scholarship, showing who Hitler was, what National Socialism was, and to give those of us who care about reality an honest assessment of both.