It’s follow-the-leader all the way down 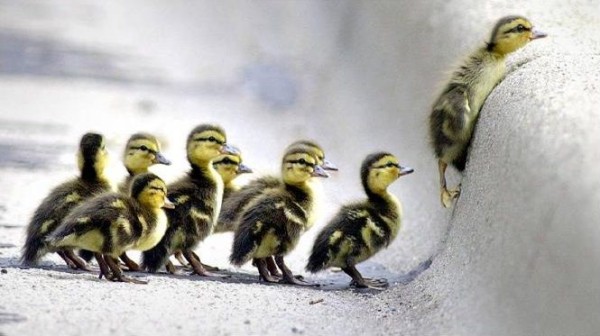 When children are very young, their nannies and teachers induce them to play a game called “follow the leader.” The whole point is to trail around behind someone who is designated the leader. It becomes a brutally exact metaphor when we see how much of our society operates on this principle.

The left will speak of obvious cases of authority obedience like the military or police actions, but the real follow-the-leader is in social choices. Democracy is not based on an ideal; it is based on the ideal of having no ideal. Freedom from everything, liberty to do anything, equality despite consequences. No matter how innocent the beginnings of these ideas, they get taken to their logical conclusions.

In a society based on non-order, as all populist social orders are, there is no clear idea of what is desired. Instead, it is whatever the whim of the crowd is today. Thus, no one knows until someone gets lucky (or figures it out), and then most other people emulate that person because their approach is proven at least. This works, but then as trends shift, what is desired shifts as well. Thus all of society is busy trying to figure out what society is thinking and emulate it.

It’s a perfect control mechanism. It keeps people from having a goal, thus those in power can never fail to satisfy that goal. It keeps society inward-looking, so reality becomes secondary and manipulation of opinion becomes the norm. It alienates people from any idea of truth, beauty, goodness, clarity, common sense or values, which makes them malleable little consumer-voters who are swayed by short-term rewards. The result is a control structure that cannot be overthrown.

The downside is that it also self-destructs. Imagine a game of follow-the-leader that was circular, much like our society. That is to say, as soon as a leader is picked, he/she starts trying to follow what others are doing. The result would look a bit like a Moebius strip as every member of the group got in line and followed the others. However, they would still be moving forward, so that Moebius strip would inch its way across the schoolyard, not moving directly toward a goal but moving laterally. And therein is the downfall of such games.

Societies based on “people power” have no objective except themselves. They take control and then, having no idea of a positive objective, implement their negative objectives: kill the leaders, remove the rules, break down the boundaries. At that point, they know nothing, so they launch into a lengthy game of follow-the-leader. As lateral motion takes over, they not only fail to commit to any goals and realize them, but they drift out of relevance entirely. If not constrained by some kind of fence, they will wander the earth in perpetuity or at least until they starve.

Democracy, implemented in 1789, is one such game. We have no goal, so we ad hoc invent goals with the careless whims of a crowd. Then some other drama happens, and the goal changes. Instead of building a great society, then, we spend all our time chasing down ideas that other people think are important because other people than they think these ideas are important. It’s a giant loop, consuming itself and wearing out its birthright of past inventions and glories, with a descent to third-world levels of chaos and corruption as its only future.